Bubba and Jordan at Augusta 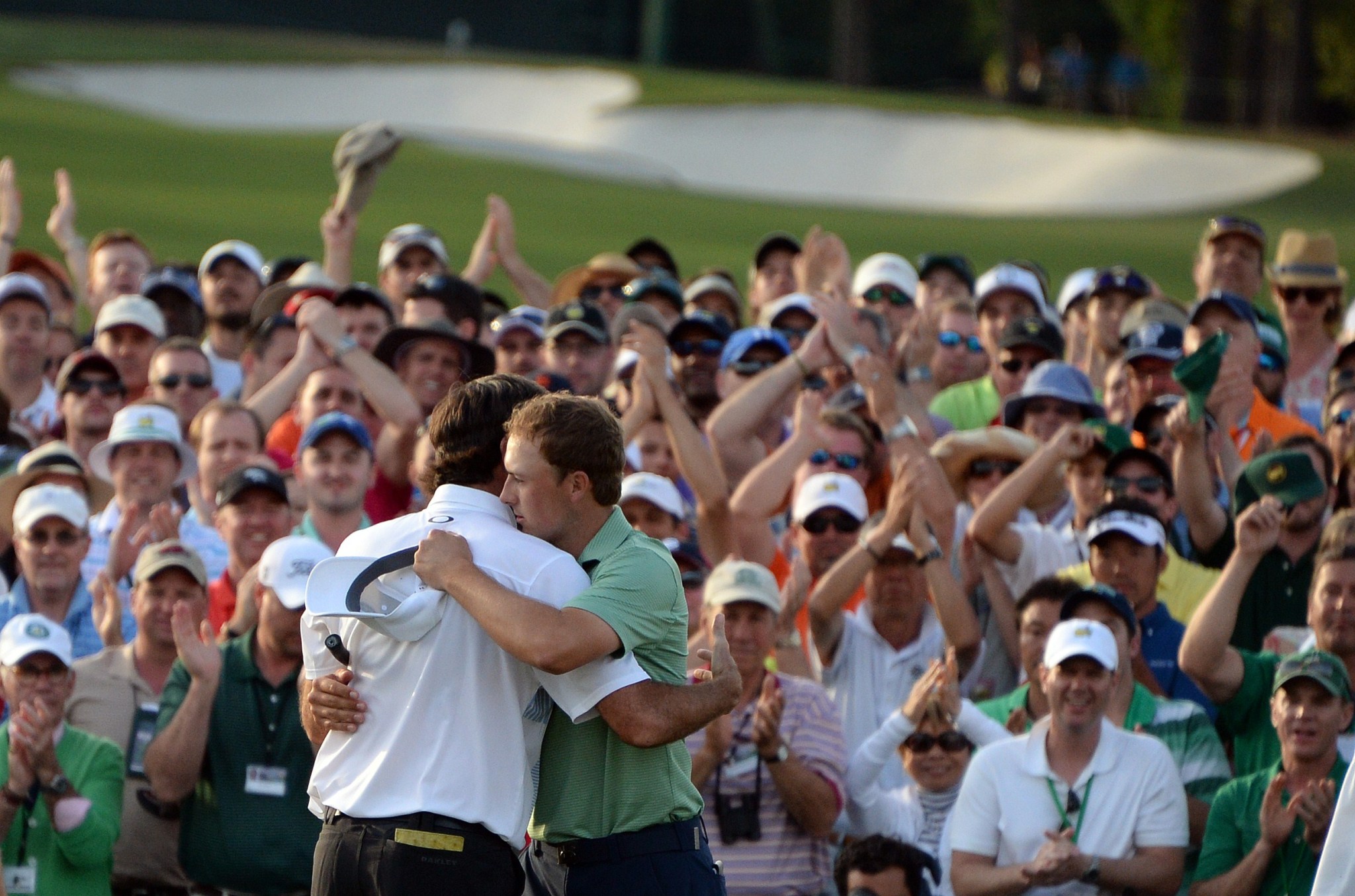 It was Jason Day who first observed, last Monday, that if you watch the Golf Channel, you might think there was a young golfer on tour whose full name was “20-year-old Jordan Spieth.” The joke is applicable to all media — not just television — and I’m no better than anyone else. Spieth’s story is inextricable from his age.

The reason for our collective fascination, though, goes beyond the simple fact that he’s young and plays golf at a high level. That’s remarkable, but what sets Spieth apart from the legions of talented young golfers is the total, unflinching composure he shows in public. This is usually described as maturity, but to me, Spieth is more like an ultra-polished golfing Übermensch dreamed up at a PR think tank. He’s the kind of player who never says the words “Nicklaus” or “Palmer” without attaching a reverent “Mr.” at the front, and who, in the rare moments when he shows his youth, apologizes immediately afterward. 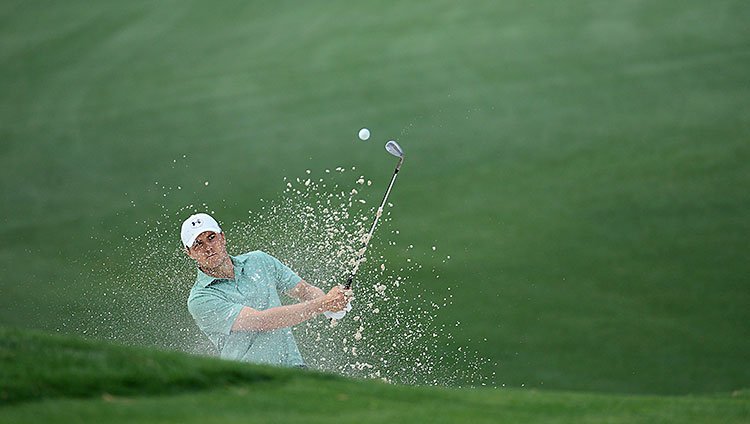 He’s not boring, though; he can be witty, very insightful. He’s religious enough that he attends the PGA Tour Bible study meetings with players like Bubba Watson and Webb Simpson, but he doesn’t speak about it on camera. Like many golfers, he tolerates the media with patience and charm. The diligence with which his team protects him is totally unnecessary; this isn’t a player like Tiger Woods who will get caught making a racy joke, swearing profusely on camera, or, heaven forbid, frolicking with strange women. He gives you just enough to write your story, and then disappears.

And if he can keep his “real” personality hidden at age 20, he’s going to become only more efficient as he grows up. No player has won the Masters in his first attempt since Fuzzy Zoeller in 1979. Augusta National is a course that rewards experience in a thousand subtle ways, and the Masters is a tournament that comes with the kind of pressure that can crush you if you’re not used to it (or even if you are). So as the sun set over the pines on Saturday night, and Spieth left the grounds sharing the lead with 2012 champion Watson, the question on everyone’s minds was the same: Would Sunday be the moment 20-year-old Jordan Spieth finally cracked?

Every press conference with Bubba Watson is a laugh riot. He speaks in roughly the same patter as Will Ferrell doing a George W. Bush impression — coming down hard on random words, laughing at his own jokes, dishing out zingers that range from “pretty funny, actually” to “nonsensical.” 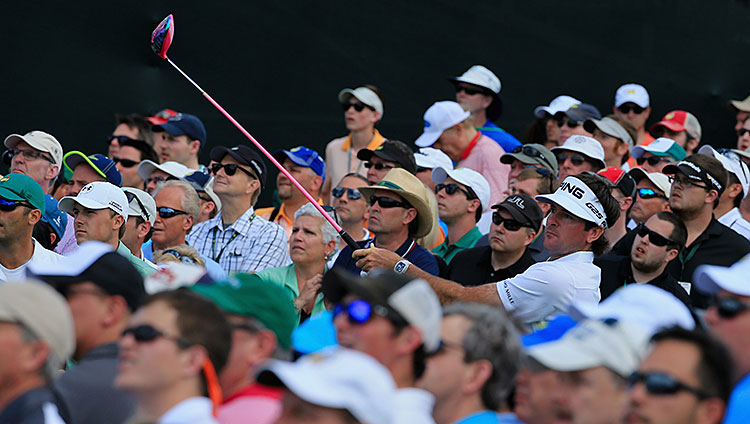 He’s in love with his own mythology, to the point that a press conference rarely goes by without him referring to “a kid named Bubba from Florida.” Fans love him because of his name, and because he hits the shit out of the ball with a pink driver, and has never seen a risk he won’t take. He’s deeply religious, and breaks down on camera when he wins tournaments, but he can also be insecure and retaliatory if he’s questioned in a way he doesn’t like. There’s also his combination of intelligence and ignorance. When someone asked him where Finland was in February (he had just beat Finnish golfer Mikko Ilonen in the first round of the Accenture Match Play championship), he was totally unapologetic about not having even a general clue. When he played in France in 2011, suffice it to say that he wasn’t America’s greatest ambassador. Here’s an excerpt from the press conference after his visit to Paris:

Watson: I don’t know the names of all the things, the big tower, Eiffel Tower, an arch, whatever that — I rode around in a circle. And then what’s that — it starts with an L, Louvre, something like that. One of those. And then we just went around to different shops, just kind of walked down the streets and went to different shops, and just to see if there was anything we wanted to buy. Just kind of looked around and kind of road [sic] around and really that’s it, just to see stuff that we don’t get to see normal.

If you think he sounds like golf’s Kenny Powers, you’re not far off. (The comparisons can get more serious, too — he gives lots of money to charity; he believes homosexuality is a sin.) But he’s a brilliantly creative golfer, as his famous Masters-winning shot from 2012 showed. (It’s telling that Nick Faldo said he was “rewriting the instructional book every time he hits a shot” before Watson hit the hook from the woods.) When Watson drives the ball straight, there are very few players in the world who can keep up with him, especially on a long course.

His reactions under pressure, though, are variable to say the least. During a two-year drought following his 2012 win, he flipped in big moments, and yelled at his caddie, Ted Scott, on camera in a way that rubbed people the wrong way (making this tweet particularly hysterical, when Watson led late on Sunday). Then he won at the Northern Trust Open in Los Angeles with an excellent final round, and the narrative was thrown back on its head. So when Watson sat in the press room on Saturday and said, “if I play bad tomorrow, I still have a green jacket,” nobody knew whether that sentiment would free him to play championship golf, or if he was already making excuses. Which Bubba would we see?

After a Saturday night that was understandably a bit restless, Jordan Spieth came out of the locker room and hit the driving range at 1:32 p.m., almost exactly 70 minutes before his tee time. He walked alone to the putting green, past Justin Rose and Lee Westwood and John Senden and Miguel Angel Jimenez and Thomas Bjorn and Kevin Stadler, applauded all the way by the crowds in the stands. He met Ted Scott on the green, and when Spieth’s caddie, Michael Greller, joined them moments later, Scott teased his friend for leaving Spieth all alone.

Watson appeared moments later to his own round of applause, and he and Spieth shook hands. With hundreds looking on, they chatted and tried to ignore the massive amounts of pressure they’d face in an hour. “We’re at 2:20, right?” Greller asked Watson and Scott, purposefully getting the 2:40 tee time wrong. “Same as you,” said Scott. “Why’d you tell him an earlier time?” Spieth asked, recognizing a joke gone awry. “Oh, right,” said Greller. “It’s 3:20.” Spieth and Watson spoke about Jeff Knox, the amateur “marker” the club used to make up an odd-numbered field, who had played with and beaten Rory McIlroy a day before. Spieth twirled his putter like a baton, and Watson laughed the nerves away.

When they moved back to the range, only Matt Kuchar and Jonas Blixt, playing in the second-to-last group, remained. Watson was particularly chatty, talking to the caddies, Kuchar, Spieth, and anyone else who would listen. Blixt stayed by himself, the classic European also-ran of the kind that seems to appear in the final groups at Augusta every year, but never wins. (Jose Maria Olazabal was the last European to win the Masters, in 1999.) Spieth and Watson began hitting their irons at the flags, and because Watson is a lefty, they faced each other. A camera on a crane hovered near them, and when Blixt and Kuchar left, they were alone. They hit their balls past the pine trees, onto the Bermuda grass fairway. In the background, the bulbous Augusta water tower marked the end of this strange anachronistic golf oasis and the beginning of a very real, very unglamorous American city. The magnitude of what awaited them both hung over the scene. When Jordan left to go hit shots from the bunker onto the practice green, Watson took out the pink driver that would make or break his day. At 2:22, he walked away down the cement path, ignoring the hands reaching out to him, and sat in the front seat of the cart that would take him to the first tee, quiet at last. Spieth left three minutes later, slapping five with the kids and smiling as he drove off.

What we found out over the next five hours was that our all-or-nothing questions were misplaced. Jordan Spieth showed he was up to the task by taking a two-shot lead into the eighth hole, and he had moments when he slammed his club into the ground and lost focus. He lost the lead, and the tournament, but he recovered from a poor stretch for an even-par 72 that was impressive under the circumstances. As he walked up 17, knowing his chances had all but ended, caught up in the emotion of the moment, he turned to Greller and said, “I’ve worked my whole life for this.” He let the sentence trail off, knowing he’d missed his chance. He may not have realized it at the time, but the way he played showed there would be many more chances. He’ll seize one before long.

As for Watson, his big moment came on the 13th hole, when he ripped a drive 366 yards over the trees and took a sand wedge into the green. The 13th hole, you should know, is a par-5. As Greller told reporters after the round, when Watson is on his game, he starts out three strokes better than an average player because of his length. When the final putts went down on 18, he had beaten Spieth by three strokes. Sometimes it’s just a matter of hitting it straight.

About Last Weekend: Break Up the Brew Crew

How those mistakes are approached by Stotts, and whether they are absorbed and put to use by Lillard are important. On Sunday, Lillard was a mix between contrite and defiant about his play.