The Reds’ Embarrassment of Riches Problem 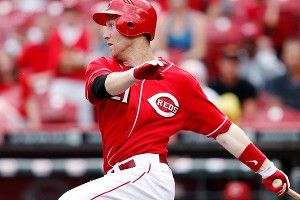 Todd Frazier has reached base in 22 straight games. He’s hitting .294/.354/.554, making him a top-25 hitter in his rookie season. In the past 30 days, only Buster Posey, Albert Pujols, Prince Fielder, and teammate Ryan Ludwick have put up bigger numbers. In that same 30-day stretch, the Reds have gone 19-11, blazing to the best record in baseball and giving themselves a shot at their first World Series in 22 years.

So what does the best team in baseball do with the guy who’s been its best hitter for the past two months? Bat him cleanup? Give him a long-term deal? Throw him a parade?

Not quite. When Joey Votto comes off the disabled list on Saturday, Dusty Baker plans to look Frazier square in the eye, and give him the good news. Congratulations, you’ve just been benched.

This season, no team has been more exhilarating, and more maddening, than the Reds. The good news starts with one of baseball’s most productive farm systems. Other teams get more credit for their scouting and player development, but the Reds have graduated a mother lode of talent to the big leagues over the past years, and those players are now hitting their stride. Five members of the current starting lineup — Zack Cozart, Drew Stubbs, Jay Bruce, Frazier, and Ryan Hanigan — were homegrown. So’s three-fifths of the starting rotation — Cy Young candidate Johnny Cueto, Homer Bailey, and Mike Leake — as well as the team’s nuclear bomb of a closer Aroldis Chapman, and Votto, the most valuable player in baseball over the past three seasons. That young core has delivered big results, in a very different way than Adam Dunn’s Reds teams once did. Now, only the Nationals have allowed fewer runs among National League teams, a stark departure from the squad that made 8-7 games a habit.

Curiously, the Reds’ offense hasn’t been all that great, ranking a middle-of-the-pack 13th in the majors for runs scored. Even with Votto missing a big chunk of the season, that seems odd. Frazier’s hitting the cover off the ball, Jay Bruce is one of only five players with 30 doubles and 25 homers this year, Ludwick might be Comeback Player of the Year, Brandon Phillips is one of the most prolific second basemen in the game, and Votto’s been spectacular when healthy.

The problem lies with the Reds’ two resident OBP sieves. Cozart’s hitting .245 with a .287 on-base percentage, Stubbs .221 with an identical .287 OBP. This would be a big enough problem if Baker buried his resident out-makers at the bottom of the lineup. It’s even uglier when they’re hitting 1-2 in the lineup. Together, Cozart and Stubbs have combined to eat up 1,009 plate appearances. Put another way, they’ve made 719 outs. And counting.

How rare is this configuration on a winning team? Try this. According to Elias Sports Bureau, in the history of baseball, only 11 World Series winners have regularly started multiple position players with on-base percentages of .290 or lower; none of those teams have batted two sub-.290 OBP guys 1-2 in the order. If the Reds win it all with Cozart and Stubbs setting the table with torn paper plates and dirty napkins, they’ll have accomplished something no other team has done in 100 years.

There are many sabermetric principles that have gained mainstream acceptance over the past years. One of them is the notion that batting order doesn’t matter. In a broad sense, that’s true. If a manager can get his best nine guys in a lineup, that’s more important than where each of them bat. But that doesn’t mean that where each hitter bats is completely irrelevant. There is such thing as optimal batting order. If you want to keep things simpler, consider this: For every spot a hitter drops in the order, he loses about 18 plate appearances over the course of a full season. Which means it’s imperative that your best hitters bat as high in the order as possible.

Choosing your lead-off and number-two hitters based on basestealing (leaving aside the fact that Cozart has four stolen bases all year) is a counterproductive move straight out of the mid-’70s. The problem is, old managerial habits can be hard to break. In 2009, Willy Taveras hit .240/.275/.285 for the Reds. That made him the second-worst hitter in all of baseball with more than 400 plate appearances that year. It’s bad enough that Baker gifted Taveras with 437 times at bat. That 84 percent of those gifts came in the lead-off spot makes it that much more egregious. But hey, Taveras did steal 25 bases in 2009. So he’s got that going for him. Which is nice.

It might seem odd to get agitated over the batting order of the team with the best record in baseball. One of the governing principles of the game, for better or for worse, is, if ain’t broke, don’t fix it. This isn’t about a stat-head vendetta against Baker either. Throughout his managerial career, he’s built a reputation for overusing starting pitchers and favoring veterans over young players. He’s also got Chapman pitching 80 innings a year of short relief when he could be throwing 200 as a starter. But Baker’s gotten better about pitch counts and common sense for starters. Giving up on veterans too soon can make you miss out on pleasant surprises, like Scott Rolen’s second-half surge. And as for Chapman, it would still be great to see what he can do as a starter, but losing a left-handed Mariano Rivera would hurt. Not to mention reliever-to-starter conversions need to be handled delicately and patiently, as Daniel Bard could tell you. All of this ignores the fact that in-game tactical decisions constitute just one part of a manager’s job. Dusty Baker’s won 1564 games during his career (some of those actually without Barry Bonds) and by all accounts does a nice job of keeping his clubhouses reasonably harmonious.

Still, Baker can change, and solving the lineup problem would be a great place to start. It’s easy to point to the Reds’ record and declare that everything’s working. But it’s also worth considering the possibility that they’re winning in spite of the configuration of their starting nine, not because of it. In baseball, trusting a bad process to keep delivering good results has a way of biting you in the ass.

Instead, the Reds can and should find a way to solve both the lineup problem, and the Todd Frazier problem. The most obvious place for Frazier when Votto returns is third base. But Baker’s not having it. “I’m not pushing Scottie (Rolen) out the door at all,” he said. He’s probably right. When healthy, Rolen still gets on base, still lashes doubles, and still plays an excellent third base.

There are two viable alternative solutions. One, have Frazier adopt a kind of Ben Zobrist role, slotting him all over the diamond. Votto’s knee might not be 100 percent for the rest of the year; let Frazier spell him there. Rolen’s 37 years old and one of the most injury-prone players in baseball; give Frazier some time at third. As great as Ludwick’s been this year, there’s evidence to suggest he does better getting some days off; move Frazier to left on those days. If you’re looking to optimize your offense, give Stubbs the occasional breather in favor of more swings for Frazier. Or just go for option two: Bench Stubbs (a decent but unspectacular defender and a lousy hitter), move the slick-fielding Bruce to center, and hand Frazier the right-field job. Cozart bats eighth forever more, and suddenly this is a significantly more potent Reds attack.

Maybe none of this ends up mattering. Maybe Frazier ends up a potent pinch-hitter, the Reds continue to get great pitching from Cueto and Chapman and enough support from the rest of the pitching staff and the three through eight hitters to go all the way. But why try to chase that goal with one hand tied behind your back? While a team like the Dodgers feels compelled to spend $260 million to improve its chances, the Reds merely have to scribble something slightly different on the lineup card every night.

Let the kid play, Dusty. You’ll be better for it.

An American in Auckland: Learning to Love the Haka With the All Blacks and Wallabies