An American in Auckland: Learning to Love the Haka With the All Blacks and Wallabies 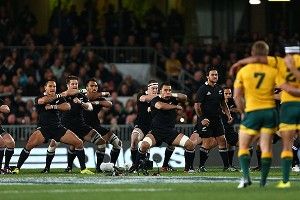 You may remember Scott Stone as the man who went further and deeper into the hypothetical idea of Olympic tug-of-war than any man has ever ventured to go. Well, Scott’s back with a dispatch from down under, where he fell in love with the sport of rugby and the pre-game ritual of the haka.

It’s Saturday, August 25, and the New Zealand rugby team is playing the Australian rugby team tonight in Auckland. I’m in Auckland on a business trip and figured I’d take in the game.

I know very little about rugby, and getting tickets has proved impossible — apparently a rugby match against people from the only nearby landmass not named Antarctica inspires huge rivalry. So I make plans to watch at a local bar. But first, I reach out to a rugby-playing buddy back home for advice.

“Be sure to be there for the beginning so you can see the haka,” he texts. I text back that my biggest concern is getting my ass kicked. He replies: “Dancing along to the haka may seem like a good idea, but will likely lead to embarrassment.”

The match starts promptly at 7:35 p.m., and I settle in at an Irish place called O’Hagans. The Australian team, known as the Wallabies, comes trotting out first. Their colors are yellow and green, like the Green Bay Packers. I smile — rooting against them is going to be easy. (Go Bears.)

The New Zealand team is known as the All Blacks. They file out and — I really like this — one of the players is holding the game ball, like he’d brought it from home.

After both national anthems are sung, the haka begins.

The haka is an ancestral war cry of the Maori people that the All Blacks have made popular around the world. To my great loss, I am only now learning of this extraordinary tradition that should immediately be incorporated into every American sport.

Both teams line up about 10 yards from each other, in parallel lines, two or three rows deep. There is no music. The lights are on. There are no “special effects.” Instead, a New Zealand player starts walking up and down the rows of All Blacks like he’s commanding a firing squad, and, while fiercely glaring at the Australian players, launches into an animated, guttural incantation.

After a few syllables, the All Blacks respond in unison. Then they lift up their arms, also in unison, and bring them down in a kind of salute that is a middle-finger short of starting a fight. This repeats and intensifies, their faces getting more animated, their gestures and gesticulations ingeniously blending intimidation, offensiveness, and entertainment without going too far. It is spine-tingling, and although I don’t know what any of it means, it’s not too hard to see the Haka as an unmitigated assault on the manhood of the opposing team.

Speaking of the opposing team, the Aussies have to stand there and watch this. They don’t react or respond. They don’t have their own haka. Forget about crowds and cautious refs; imagine the edge this gives the home team — getting to perform the haka while the visitors look on, clutching one another like a bunch of frightened children. Advantage: All Blacks.

It was incredible. Go see for yourself.

Then tell me why we shouldn’t let the home team do this at baseball games.

The match begins with a kick-off, only instead of trying to pin the other team deep in their territory, the kick is intentionally high and caught just shy of midfield. Like soccer, play is relatively continuous. Each team dedicates only a portion of its players to the area immediately around the ball, with the rest strung out toward the far sideline. As a result, most of the match could be confused for a fight that’s broken out in a corner of the field — making it not unlike the best hockey game you’ve ever seen.

Right from the get-go, the All Blacks seem like the better team. I guess this figures; I learn later they are the heavy favorites, . Also, the Aussies have a guy wearing a thin, soft leather helmet that’s the same color as the ball. In the pile, you can’t tell the difference. Dumb move, mate.

Midway through the first half, the All Blacks, having leaped to a 6-0 lead on penalty kicks, make a run at the Wallabies’ end zone. The defense really picks up near the goal line, and this is where the “giants” earn their keep. See, each team has two or three players who are about a head taller than everyone else and look like a cross between a human and a rock troll. They seem slow and plodding. But they come in handy along the goal line. Their job: to eat any opposing player that looks like he’s about to score. This happens repeatedly to the All Blacks (imagine a fourth-and-goal that just goes on and on until everyone is basically dead).

As the sides go back and forth, the thing that most readily jumps out is how play never really stops. The ball is never “down.” You get tackled, and as you hit the ground, you push the ball to a teammate behind you, who picks it up and runs a few more feet. It’s like a succession of fumbles in an NFL game, where the refs are either dead, missing, or bound and gagged on the sideline.

Unlike the NFL, in rugby, it appears you can do anything you want to another player anytime you want. (Unless you repeatedly wail on someone for no apparent reason; if it’s blatant enough, you could get sent to the penalty box, which is wonderfully called the “sin bin.”)

It takes a while to notice, but the instinctive dexterity with which the players handle the ball strikes a marked contrast with the otherwise physical and utterly brutal aspects of the game. Oblong balls bounce funny. How many times have you seen football players chase loose balls around like excited chickens? Rugby players never seem surprised by a wayward bounce. Their hands are amazing.

After a lot of back-and-forth — which I couldn’t describe with any clarity, even if my life depended on it — the first half ends. The All Blacks lead 9-0, all on penalty kicks. As the players file off, we finally see a sideline reporter. This turns out to be my second-favorite moment of the game. In rugby, they have perfected the one-question half-time interview.

The sideline reporter is basically an old guy wearing a windbreaker. He looks like one of those retirees living in a college town who spends Tuesday mornings at the local coffee shop ranting to undergrads about the ’60s. He pulls a New Zealand player aside and asks the equivalent of, “So, how’d it go out there?” And the player responds, “Well you know, it’s a rugby match, man. We’re trying to win.” And that’s it. Gregg Popovich, step aside.

The second half opens with another one of those oddly short opening kick-offs. You could write a book, I think, just about the different types of kicks.

There are long kicks, like punts, to clear the ball out of your end of the field. Free kicks, apparently after certain penalties, that can score three points if they pass through the uprights. Each team tends to have one player who takes all the penalty kicks, but he also plays the rest of the match. In other words: rugby kickers are men.

And then there are the forward kicks, which, depending on the circumstances, are called chip kicks or rolling grubber kicks. See, on offense, no one just breaks for daylight. First of all, it won’t work — rugby players are incredible open-field tacklers. Incredible. I think I saw only two missed tackles the entire match. So one alternative way to advance the ball is, just before you’re about to get smashed, you kind of dribble kick the ball forward to an open space behind the other team’s defenders. Then you shoot the gap and try to recover it, and the forward advance resumes.

This seems to happen a lot near the end zone, and it seems to work. Early in the second half, New Zealand scores the game’s first “try” (basically a touchdown, sans Sharpie) and takes a 17-0 lead.

As the second half rolls on, it’s obvious New Zealand is going to win easy, and aside from a brief but marvelously intense run at the All Blacks’ goal line, the Wallabies are unable to score. (Further evidence of the emasculating effect of the haka.)

Play is starting to get a little sloppy, and the ball is increasingly knocked out of bounds. But the throw-ins (called lineouts) are quickly becoming my favorite part. Why? Because you’re allowed to take a teammate and literally toss him into the air to try to catch the ball.

Let me say that again: You can pick up a teammate and throw him into the air.

In addition to the haka, I want this incorporated into every American sport. Imagine if Joakim Noah could rotate out to the foul line and, instead of setting a pick, simply take Derrick Rose and fling him over his shoulder toward the hoop, where Rose would promptly dunk and then splatter against the backboard, slowly sliding off the glass before being caught by Luol Deng at the baseline. I would watch this. Hell, I would try this. (Side benefit: Oft-sullen NBA players might think twice before complaining that they’re not a big enough part of the offense.)

Final whistle. All Blacks win 22-0. It is apparently considered a less-than-crisp match and the heavyweight favorite wins easy. But I don’t care. My mission is clear: Get the haka and the ability to throw players in the air allowed in every American sport, starting with the NBA.