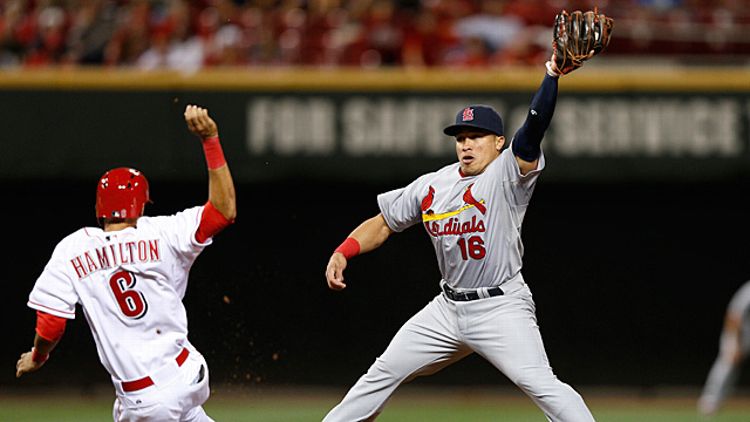 Scouts grade the individual tools of prospects — power, throwing arm, speed, among others — on a scale of 20 to 80. The major league average is 50. A standard deviation above that is 60, and so on. To grab an 80 grade, a player must have truly stupendous ability. An 80 overall player is a surefire Hall of Famer, and to even have one skill graded at 80 puts someone in rare company.

In motion, the Reds rookie looks almost like a child — he’s only listed at 160 pounds (which means he weighs only slightly more than Mike Trout’s neck), and the combination of his baggy uniform and boyish face makes him look far younger than someone who’s about to turn 23. He wears the goatee of a man who’s seriously concerned about his ability to buy a six-pack.

But on the bases, Hamilton is a man. To say he accelerates like a Formula 1 car would be a cliché, but one so accurate it can’t be avoided. He quivers with potential energy and in an instant is gone, as if he had a V-8 shunting power to a pair of enormous slick tires as he bolted between bases.

So when Hamilton came in as a pinch runner in the seventh inning of last night’s Reds-Cardinals game, it was exciting enough on its own. That it came with the score tied 0-0 against a division rival in the heat of a pennant race, with Yadier Molina behind the plate for the Cards made it even better.

Molina is, by acclamation, the best defensive catcher of his generation. His throwing arm has turned the tide of seasons. Take, for example, Game 5 of the 2011 NLDS.

On Tuesday night, the stakes were lower, but with Cincinnati and St. Louis fighting for the division lead, not by much.

Hamilton came in for Ryan Ludwick with nobody out in the bottom of the seventh inning. Immediately, Cardinals reliever Seth Maness threw over. Hamilton, who’d taken a conservative lead, dove back safely and furiously readjusted his jersey. Maness threw over again. This time, Hamilton made it back standing. On the first pitch, Hamilton took off. Molina popped up quickly and threw to second, and Hamilton was safe.

But it was ugly. Hamilton got a terrible jump.

Maness is already coming forward toward the plate and Hamilton has barely shifted his weight to his right foot. Hamilton stole this base on speed alone. Here’s where Hamilton was when Molina caught the ball.

And even when Molina released the ball, Hamilton was only slightly more than halfway to second.

Hamilton was safe thanks only to Molina’s throw sailing high and to the right. Kolten Wong made a nice adjustment to arrest his momentum and snag the throw over his left shoulder, while still getting his glove down to make the tag. Hamilton, whose pop-up slide to the middle of the bag was as cavalier as his lead and jump, was comfortably safe, but not as comfortably as one might expect from someone who’d stolen 155 bags the year before.

Base stealing has surprisingly little to do with speed. Herb Washington, probably the only modern major leaguer to hold a world record in track and field, was 31-for-48 on stolen base attempts in his career, well below the breakeven point. Darren Daulton, the longtime catcher who’d probably have to shoot Washington in the kneecap to beat him in a footrace, was 50-for-60. Hamilton’s still young, so he has time to learn the finer points of base stealing. And he better, since base stealing is all about the finer points.

But if you watched to the end of that at-bat, when Hamilton was practically teleported from second to home on Todd Frazier’s game-winning double, you can tell that his speed is truly game-changing.

In Hamilton, Dusty Baker has a weapon of incredible potential in high-leverage situations, particularly because the expanded rosters mean he will almost never have to bat unless Baker wants him to.

That’s a strange thing to say about one of baseball’s most notable prospects, but there’s a reason. The same flea-like physique that serves him so well on the bases makes him a liability at the plate. Hamilton has only 13 home runs in 2,258 minor league plate appearances, which is a weakness that has the potential to spread throughout his entire game, because of what I call Ben Revere’s Disease.

Revere, the Phillies center fielder who famously has never hit a major league home run, hardly ever walks, despite superb contact skills and a reluctance to swing at pitches outside the strike zone. Because of his lack of power, pitchers are more content to take their chances with Revere than even a hitter with limited power.

Of course, all this could change. But for 2013 alone, Baker and Walt Jocketty have to make a difficult decision; Hamilton will be great to have around for the pennant race, but come playoff time, will it be worth spending a roster spot on his legs and glove, if they know they can’t practically use his bat?