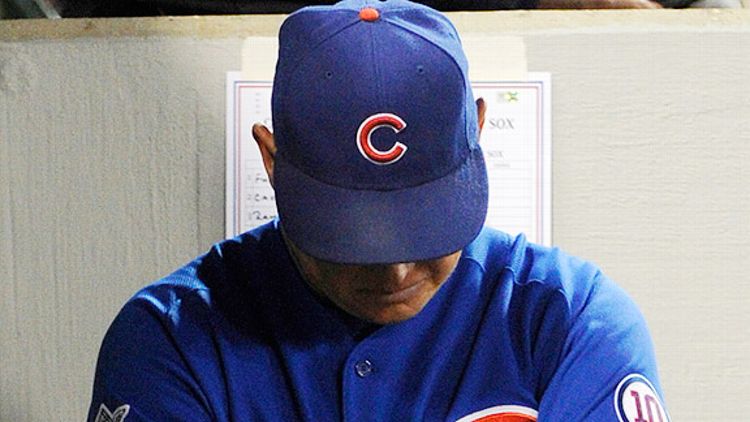 Jon Daniels should have known better. The Texas Rangers GM was hunting for relief help at the deadline, so he reportedly buzzed his Cubs counterpart, Jim Hendry, to see about Carlos Marmol. Marmol was having a good enough season, albeit down from his huge 2010. Maybe Hendry would be amenable to a trade.

Hell, no. Which makes sense, because you can’t just call up a team 15.5 games out of first place and 21 games below .500 (now 16.5 and 22) and ask about their ninth-inning guy. There’s no position more important for a team going nowhere than someone to close out their meaningless games, especially when it costs only the $18 million that Marmol is set to make through the end of 2013. Wait, no, none of that makes any sense at all. Unless you believe the Cubs are about to roll up a 25-game winning streak and get right back in this thing. In which case, piss off, Jon Daniels!

Chicago’s refusal to trade Marmol was just one example of its bone-headed, and completely dumbfounding, intransigence.

After a brutal May, Carlos Pena rediscovered his power-hitting stroke of old, posting a .504 slugging percentage with 20 homers over a three-month span. Pena was still owed one-third of his $10 million 2011 salary, a free-agent-to-be, and would give the Cubs no compensation picks, or anything else at year’s end. There was no conceivable reason to do anything other than shop the hell out of him. Even a half-decent Class A prospect would be fine. So what did Hendry tell teams interested in renting Pena’s services? No thanks, we’re good.

What about Marlon Byrd, a soon-to-be 34-year-old outfielder with a year left on his contract whose market value was likely inflated by a batting average 26 points above his career average? Don’t even bother asking.

There is no clearer mark of trade deadline cluelessness than the noncontending team that does nothing. At least with buyers who stand pat, there could be mitigating factors. A team like the Philadelphia Phillies is a virtual lock to make the postseason. And the argument could be made that the playoffs are something of a crapshoot in which lesser teams riding a hot streak and some good luck can win it all. Under those circumstances, you can justify not wanting to give up premium prospects for incremental gains.

But if you’re out of it, and you have players whom other people actually want, what the hell are you waiting for? There’s the old argument that if you sell off your recognizable players, attendance and revenue could suffer. Which is true to a point. But if you’re 21 games under .500, the fair-weather fans are already long gone, and it seems fair to assume that star and quasi-star players won’t make a significant difference in revenue in a pointless final third of the season.

This isn’t to say that all teams seemingly without the playoffs in their immediate futures should be holding fire sales. The Tampa Bay Rays aren’t contenders and they stood pat, but for good reason; veterans such as Johnny Damon and Casey Kotchman weren’t in demand, and better pieces such as B.J. Upton could be traded in the offseason, when conditions might be more conducive to a big return.

The Minnesota Twins appear dead and buried to most observers. But they got a bunch of players back from injury, play in a lousy division, and haven’t forgotten the 2006 team’s eight-week rally from 10.5 games out to win the division, which might be misguided, but is still somewhat defensible.

The Royals probably should have made some moves, but they seem convinced that players such as Jeff Francoeur have lasting value (and while that’s already dubious enough, Francoeur holds a mutual option at the end of the year that would allow him to flee if he thinks he can get more than $4 million from someone else). But who knows, maybe Francoeur really has turned a corner, or maybe he really loves Kansas City! It’s definitely a foolish approach, but only 98 percent inexplicable.

More broadly, it’s conceivable that would-be sellers like the Rays, Twins, and Royals tested the waters, saw no attractive offers, and had somewhat sensible reasons to think that they could always try again later.

The Cubs? They had multiple players with real trade value and no keeper value with teams sniffing around. Yet they didn’t make any trades. They didn’t seem to want to field offers at all, preferring to let the baseball world know that fifth place would be just fine.

You wonder if this is the season the Cubs will finally give Hendry the boot, after years of bloated payrolls, ill-advised moves, and merely sporadic success, not to mention a consistently disappointed fan base. But if that’s the case, could Hendry be trying to keep as many veterans as possible in the hopes of window-dressing his way to a halfway-respectable-looking season? Could something else be going on behind the scenes? (We’re grasping at straws here, folks.)

Whatever the case, these are definitely the same old Cubs, the franchise that blames a billy goat for a century of disappointment, then quickly tumbles into a second century of failure. If any team could use a forward-thinking new GM to rebuild the front office and lead the team out of the wilderness, it’s the no-longer-lovable losers of Wrigleyville.

Jonah Keri’s new book, The Extra 2%: How Wall Street Strategies Took a Major League Baseball Team from Worst to First, is a national best-seller. Follow him on Twitter @JonahKeri.

Previously from Keri:
A Giant Day
Unhappy Meals: Why Tuesday’s Disputed Call Proves Nothing
The Curious Case of Adam Dunn