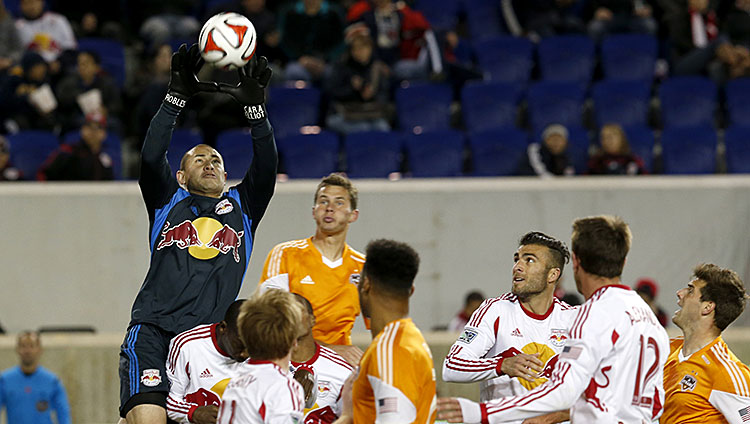 A couple of weeks ago I described New York’s breakout win over Houston Dynamo, with the caveat that the Red Bulls defense appeared to be built on roller skates. Fast forward to last weekend and it’s ROLLER DERBY! EVERYWHERE!

For anyone other than defensive coaches, fans of balanced teams, and bloggers who write about 0-0 draws between Italian powerhouses, this was the weekend when MLS tilted into wildly enjoyable, strategically dubious, rock ’em–sock ’em mayhem.

First Bradley “Brag Fillings” Wright-Phillips got another hat trick, only to scramble from the rubble of New York–Chicago to find that Harry “Shipwrecker” Shipp had got one as well, and that the Chicago Fire (“Chicago Fire” — it’s hard to turn many MLS team names into roller derby parodies when they essentially are roller derby parodies) had broken their winless start to the season by winning 5-4 at Red Bull Arena. Clearly, neither of those teams had their defenses to thank for such a tight scoreline, but a shout-out to Armando “Lil Dignity” Lozano for his particularly stumbling performance in the New York defense.

Back in Houston, the Dynamo put two past RSL, thanks to Mark “Cherodactyl” Sherrod scoring two on his debut for the team. Sadly for Sherrod, and the Dynamo, that was as good as it got. Houston started the game by falling behind after 17 seconds to a chip from Javier “Moral E Bang Ruption” Morales. They let him have another after 17 minutes. The Dynamo weren’t helped by Servando “Crash & Co.” Carrasco being given a straight red for crunching into Morales in the first half. By the end of the game, Morales had another hat trick and RSL got their first ever win in Houston, 5-2.

RSL are unbeaten, but for all their emphatic forward movement, they were creaky at the back all night. It seems strange to describe an RSL team that scored five as “living dangerously,” but this particular brand of invincibles might be advised to put a little more armor on when they go marauding forward.

And so to New England, where the Revs did to Seattle what some team was always going to do to the Sounders. They stuck a target man up front, pinned back the defense, and reaped all the benefits of the subsequent second-guessing confusion as Seattle’s wobbly back four forgot what to do when their attacking teammates weren’t scoring goals.

Clint Dempsey walked off the field looking unhappy with the overall performance. But he has to look at himself first, having had a negligible impact against a New England side who appear to have prioritized a defensive platform over attacking flair. With Diego Fagundez finally scoring this year, the Revs are getting rewards for that safety-first approach.

They’re something of an exception amid the attack-heavy front-runners in MLS — all of whom seem to have been watching the first 75 minutes of Liverpool vs. Crystal Palace on repeat.

It’s no secret that any team with attacking pretensions has to make compromises elsewhere on their roster. Teams that pour resources into their forward line and creative midfielders are essentially banking, crudely put, on scoring more than their opponents.

In solution to that, coaches I’ve spoken to around the league will often point to the wide defensive positions as places they look for “serviceable” options when building the team. It’s one of the reasons why the “Ashley Cole to MLS” rumors make sense when you look at his age and profile, but little sense in the reality of building an MLS team under the cap.

Instead, having a player like Sporting do in Seth Sinovic, who can play many, many minutes a season, do a decent job, and not cost the Earth, is a more practical option — as is grooming presumed future central defenders by playing them initially in wide positions, such as the Revs did with Andrew Farrell last year.

New York and Seattle have spent money looking up the field rather than across their defensive line. And while it’s been enough for the latter to cut a swath going forward this year, they were caught out at the weekend. While for New York, trying to make the shift from the pragmatic two blocks of four that won them the Supporters’ Shield last year to a more dynamic overlapping from their full backs has left them exposed when teams put pressure on them in their own half (as Chicago did in scoring four after halftime last week).

It’s just a reality of the salary cap that however MLS coaches cut their cloth, it’s never going to quite stretch over an 11-man frame.

It presents an interesting challenge to the league executives as they ponder their position for the new collective bargaining agreement next year. Until MLS sides are competing in a more recognizably scaled version of the global football economy (and yes, that’s a scary thought given the global football economy’s grasp of fiscal prudence, but the key word is “scaled”), the league’s bid to become a top-10 competition by 2022, and its own technical development, will be skewed by the restrictions its technical directors face in juggling the competing imperatives of coaches and marketers.

MLS and US Soccer announced a new TV deal with ESPN, Fox, and Univision on Monday. During the press conference in New York, commissioner Don Garber was asked if the players could expect to see a bigger share of the money from the much-improved TV deal. At the time he noted wryly that “my guess is that the players will expect to see that,” before steering the conversation gently away from the topic. But he knows he’ll have to truly face that question very soon. And until the coaches can bring in players who can balance the team as well as the books, there’ll be a lot more roller derbies and fewer Clasicos worthy of the name.