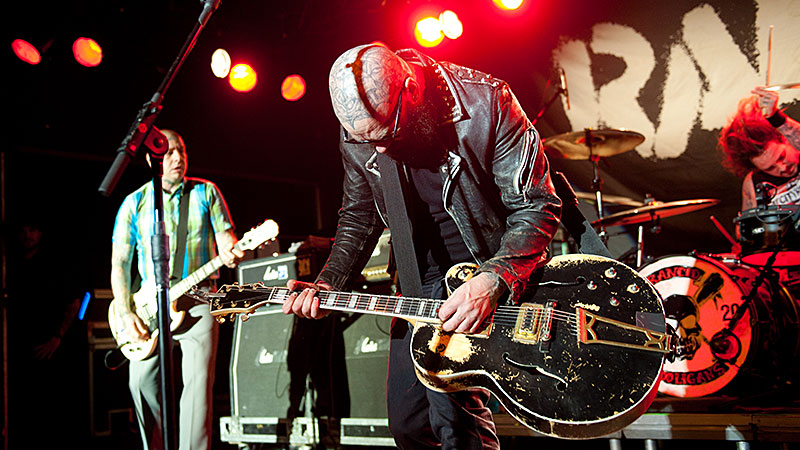 Sometimes when I’m thinking about what this week’s MLS column should be about, something blindingly obvious just presents itself — Thierry Henry will squat Gracie Mansion in the belief he is now New York mayor (“Yes, build, but the middle classes, that’s the legacy, no?”). Michael Bradley will be found roaming Canadian tundra with a pool ball in a sock, screaming, “Ah’m the daddy nah!” John Hackworth will smash up a hotel room naked. David Beckham will blink.

And I will duly report it, with a liberal attitude toward accents, what people said, who was actually there, and whether these events actually occurred in space (the venue for expansion team no. 27, by the way — Don Garber has visited twice, met the mayor, and praised the fans who turned out to demand a team).

Anyway, this week is just such a week. And there’s no way to sugarcoat this, since this is the biggest news in MLS:

Rancid have split up.

Now before my editor, a famously sensitive soul whose credo for life was established by the 1995 album …And Out Come the Wolves, starts weeping, this is purely a symbolic split along soccer lines, and the band’s eighth studio album, Honor Is All We Know, should still be out this year in time for him to soundtrack his YouTube montages of Brendan Rodgers motivational speeches. [Ed. note: STEADY.]

Basically, the San Jose Earthquakes rebranded or something last week — there’s a video somewhere on the web explaining their new crest, which now has symbolic stripes, mentions 1974, and says “QUAKES” on it. There may also have been a postmodern reference to the novels of Armistead Maupin. I don’t know. I wasn’t really paying attention after they led off the video with this George Best goal …

… which frankly sets the bar pretty high for any badge reveal that has to follow — even if you animate it.

But more than that, the Quakes soundtracked the video with a new song, and now club-sanctioned anthem, from a band called Old Firm Casuals. It’s a brisk little Oi! number called “Never Say Die.”

Old Firm Casuals, it turns out, are a cheerfully unreconstructed, Ben Sherman–stretching trio led by none other than Rancid vocalist/guitarist Lars Frederiksen, a San Jose fan who clearly knows his stuff about the Earthquakes. Even the typeface for the band’s logo nods to the one used in the original Goonies movie — the one that inspired first Steven Lenhart and now the Casuals to coin the phrase “Goonies never say die” (about the team’s habit of bundling home injury time goals).

It’s very San Jose, or perhaps more particularly, very 1906 Ultras — one of the supporters groups in Major League Soccer with a little bit of a reputation for not always playing nice with others, but who at their best make for a precarious spectacle of noise and shirtless men bouncing around. (This all sounds very like Oi!) In the Supporters Shield winning season of 2012 in particular, this sweaty mosh pit in scarves celebrating, as their avatars on the field, Alan Gordon and Steven Lenhart, Angry Birded another late goal, was one of the more fun sights of the year.

(In this San Jose-as-Oi!-scene scenario of course, Chris Wondolowski, who also scored most of the goals, is the clean-cut kid who conveniently owns a PA and then also turns out to be an amazing drummer from years of attending marching band).

That “Never Say Die” isn’t the first musician/supporter-penned official anthem in MLS is not that remarkable in these days of rapid expansion. That it’s the second by a member of Rancid is.

You may remember that a couple years back, Rancid drummer Branden Steineckert penned this impossibly catchy anthem for Real Salt Lake, somehow capturing the mix of sweet optimism, endless tattoos, midfield diamonds, and hair mutilation that was the essence of RSL.

It’s since become a staple at RSL games, both as an official piped-in pregame song (a ritual just this side of cheesy) and as a fan chant (actually pretty beautiful). Hearing it roll out of the RSL section, deep into stoppage time, and then during penalties at MLS Cup was one of those moments where you get to witness a mass of people briefly becoming greater than the sum of their parts. And yes, the team lost, but in this case that’s hardly the point. It’s a song that quickly earned its place in the fans’ canon.

Naturally, Mr. Steineckert got rather excited by this development, to the extent that he even did a very melancholy remix of the song when his side got to the 2012 playoffs. It’s a little intense …

…but that’s OK, because so are the dark recesses of Nick Rimando’s head, where this video was shot.

Given the pattern established by Steineckert, Old Firm Casuals no doubt have their own introspective twist on “Never Say Die” already recorded — perhaps with a world-weary deadpan delivery by Lorde that makes you feel all doubtful and anxious about how much time is left, just before Lars Fredriksen yells, “TWOTHREEFOUR” and a big lad in Doc Martens crashes through a goalpost made of glass, as we fade to black.

More pertinently, there are two members of Rancid yet to reveal their MLS allegiance in song, though with my industry hookups I can reveal that guitarist Tim Armstrong is working on a gentle ambient number with Landon Donovan staring at a beach. It’s not technically affiliated with the Galaxy, and most of the lyrics are sighs, though a studio insider says that they move from “disconsolate to content” and “it’s like Brian Eno if he came through the academy system.” So make of that what you will. No release date as yet. It’ll be out “when it feels right,” according to Donovan.

Most intriguingly, given Steineckert’s RSL connection, bassist Matt Freeman is working on a sprawling “Jazz Odyssey” ode to Colorado Rapids, “Gesamtkunstwerk für Mastroeni.” This threatens to redefine the art form, structured in three movements that tell the story of the Rapids from the Gary Smith MLS Cup–winning era to today. It starts with a bruising industrial assault that makes “Never Say Die” sound positively tinny, then segues into a seemingly amorphous middle section that gradually reveals a pattern as it goes along, eventually hitting a high point of Fela Kuti–inspired youthful zest, set to a Krautrock-style backbeat, before leaving for Dallas just when you’ve worked out the melody.

It’s ambitious, but that’s the challenge Rancid have set themselves, as they take their musical differences to the field. It’s a renaissance and we’re living through it.

Just remember, though: Rancid are trained professional musicians. Don’t attempt an anthem at home, or you end up with this.