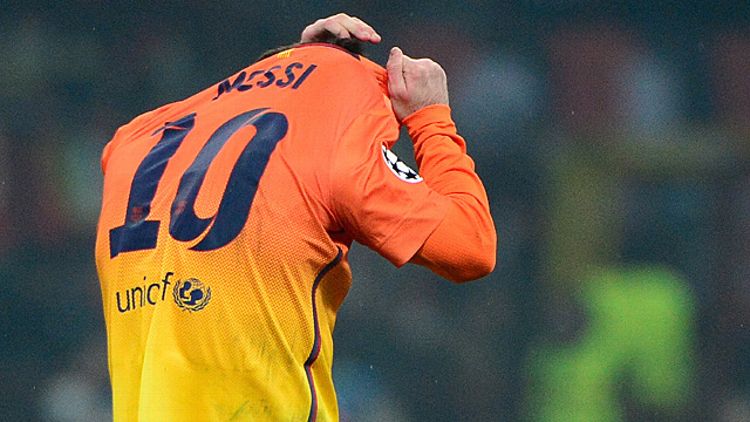 Let’s start at the San Siro, where AC Milan upset Barcelona, 2-0. This was a fascinating match, where Barca was unable to accomplish anything resembling their typical incisive play, and Milan played wonderfully. Their second goal was an absolute stunner, a beautiful piece of teamwork where they strung together four incredibly difficult touches across the perimeter of the box, leading to a wonderful volley from Sulley Muntari. Milan’s defensive effort was remarkable, limiting Barcelona to a handful of half chances. But the first goal …

What’s going on here? Let’s break it down. Riccardo Montolivo takes a shot on goal that appears to be heading just outside of the left post, at which point Cristian Zapata, summoning the spirit of his revolutionary namesake, lifts his hands in the air to signal “V for Viva,” and bounce-passes the ball to Kevin-Prince Boateng, who calmly slots it past Barcelona keeper Victor Valdes. Goal? Goal. Really, we’re going with goal? We’re going with goal.

Bonus blunder points go to Barcelona’s Jordi Alba, who uses his patented “spin around and fall over” man-marking technique to induce the uncalled handball, and Scottish referee Craig Thomson, who just made a number of enemies for life in Catalonia.

This comes at the end of a nice passage of play from Bayern Munich, leading to their opener in a 3-1 away win over Arsenal, which is why this blunder isn’t higher on the list. But on this cutback from Thomas Müller to Toni Kroos for Bayern’s first goal, can someone please explain to me what Aaron Ramsey and Per Mertesacker are doing?

Ramsey has to change directions, as he’s one of three players that Bastian Schweinsteiger drags into the box on his run, which partially excuses the young Welsh midfielder’s lame attempt to get a foot on the cross. Ramsey was in the game as a defensive hedge by Arsene Wenger in lieu of a number of more attacking options. If this is the player you have in as a defensive hedge, yikes. Watch how he attempts to break up the cross. This is the sort of effort that gets you thrown off of an AYSO traveling team.

Mertesacker, though, appears to be the player primarily responsible for the space Kroos is filling. Kroos smartly holds up his run, which means as the cutback is coming, Per has to make a difficult close-out. He chooses to do so by loping like a baby gazelle, turning himself to make his body as small as possible, before finishing his sterling defensive effort by clipping Kroos on the follow-through. Take a bow, Mertesacker. Or just fall all the way over. Either way.

His Les Mis Callback Was a Bit Over the Top

There is simulation, there’s simulation, and then there’s this piece of simulation from the master himself, Barcelona’s Sergio Busquets. Busquets goes in wildly on Giampaolo Pazzini, and then, this:

After this play, the announcer calling the game for Fox Soccer actually said, “It looks like Sergio hurt himself on this tackle.” Really? Really? I promise you, concerned announcer man, Sergio is fine. Credit to Scottish referee Craig Thomson for booking Busquets on this tackle despite the histrionics, and for further angering the people of Catalonia, who have had it too good for too long.

I’m Not Saying, But I’m Saying

Galatasaray was forced to settle for a 1-1 draw in Istanbul against Schalke, thanks to their inability to handle a standard clearance, which directly led to an equalizer scored by USMNT midfielder Jermaine Jones. Let’s have a look:

I want to preface this by saying that being a center back is hard and unforgiving work. A single bad touch can erase a whole day’s good work. But, wooh-boy, that touch from Cameroonian Dany Nounkeu. First of all, it’s somewhat unclear as to why he charges forward to take this ball when midfielder Felipe Melo seemed to have the area held down. But, no matter, all you have to do is bring the ball down, or play it back to your keeper, or boot it forward, or … or … one-touch lay it off to Jones. Whoops.

To be fair to Nounkeu, that ball to Jones is perfect. You couldn’t possibly set up a break better. He hits Jones in full stride, with two other attackers surging forward in support. Also note that by running up to take the ball, he leaves fullback Sabri Sarioglu on an island playing everybody onside. Also note the total breakdown in communication between Melo and Nounkeu. And then, again, note how perfectly Nounkeu sets up the break. Note the hold-up play. Note it. And maybe, just maybe, keep an eye on his bank account.

We close with Bayern Munich’s first goal allowed since the German winter break. The Bavarians have been so dominant that this was in fact the first shot on goal they’d allowed in 450 minutes. So you know with a streak like that on the line, it’s going to take a Herculean effort to get one into the back of Manuel Neuer’s net. And here it is:

Wait, no, that’s how Arsenal … what? Earned a corner kick? Whatever. Note: Theo Walcott knew EXACTLY whose ball it was.

And this is how that corner kick went:

My favorite part of this goal (aside from Jack Wilshere’s baffled shrug as the ball first lands) is the technique Podolski uses to muscle his way past former teammate Bastian Schweinsteiger. Watching this live, I thought Neuer was to blame for the goal, and yes, if a goalkeeper leaves his line, he has to at least try to make contact with the ball. But what on earth is Schweinsteiger doing here? Podolski is hardly summoning the ghost of Dennis Bergkamp to get around him (note: Dennis Bergkamp is still alive, and is still a better attacking option than anyone on the current Arsenal roster). Poldi just walks around one of the best holding midfielders in the world. Also, when is the last time you saw a corner kick where no one jumped? Dante and Mario Mandžukić just bump into each other. If something like this can happen, then why doesn’t it happen all of the time? What is anyone doing here? Nothing about this makes sense. It’s as if Podolski has a watch that can stop time, but he could only use it once, and he chose this time to do it. Why? I demand answers, but know there are none forthcoming. For we have reached the end, the blunder of the week.