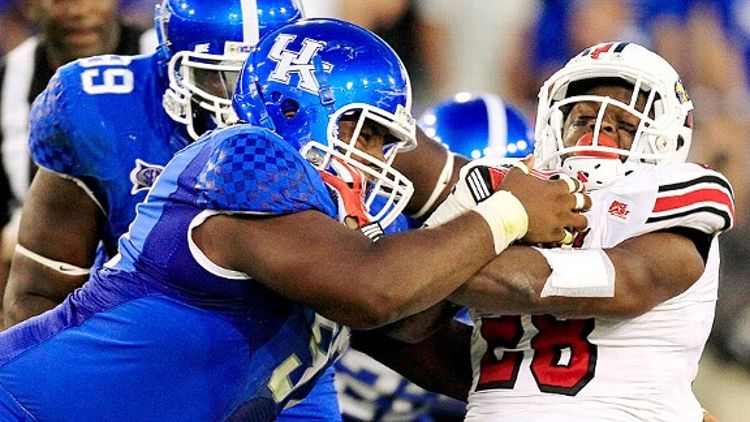 Here at the Triangle, we consider ourselves connoisseurs of a good name. That said, we’ve scoured the list of NCAA football players, and we’re ready to bestow this year’s awards for the best names in college football at every position. It’s like a Gold Glove, except way more legitimate. This installment covers the defense.

Part I: The Offense

Wasn’t Mister Cobble a classic children’s book about an old man who fixed shoes? If not, it should have been. And “Pearlie Graves” is the darkest name in college football, a weird gothic take on “pearly gates.” You don’t go to heaven, man, you just go in the ground.

Lavunce Askew, Arkansas — I heard he lines up crooked.

De’Aires Cotton, Texas — No, man, de air is oxygen. Always has been.

Sean Cwynar, Notre Dame — They let a welshman into South Bend?! Someone phone the bishop!

Will Hill, Virginia — It would be impossible to come up with a lazier first name.

Wade Keliikipi, Oregon — If you don’t look too closely, this is a perfect anagram for “Wikipedia.”

Baker Steinkuhler, Nebraska — Come on man, are you a baker or a stein cooler? Cuz I got some hot steins here, and a party full of thirsty diplomats!

I like that these guys could also be rival circus ringmasters.

JaQwaylin Arps, Kansas — These are the sounds a wounded dog makes.

Cutter Baldock, Arizona State — “Cut her bald, doc,” is a line from a movie I never want to see.

Shubert Bastien, Middle Tennessee — If I was making a “football player or European classical pianist?” online quiz, he’d be near the top.

Thomas Batchelder, Navy — He’d be there too.

Marius Burgsmueller, Idaho — Him too.

Jadeveon Clowney, South Carolina — He almost made the first team, because I thought he’d be a great partner for Barkevious Mingo.

Euclid Cummings, Georgia Tech — Appropriate that he goes to a math school.

Denzel Drone, Michigan State — I think a lot of us were Denzel drones during the Pelican Brief era, am I right?

Gorby Loreus, Middle Tennessee — Can you prove he wasn’t named after Gorbachev? I choose to believe he was.

Dame Ndiaye, Arizona — Original name was “Eric,” but then he was given the Dame Grand Cross of the Order of the British Empire by mistake.

Dadi Nicholas, Virginia Tech — This is probably a name for “Santa Claus” somewhere in the world.

Godspower Offor, Wake Forest — Joke about this name, and ye shall be struck down!

We have one eccentric billionaire, one gritty outlaw, and one dapper professional gambler from 1890. A good linebacking corps.

Blaze Caponegro, Temple — Came so close to making the starting lineup, but we had a “Blake Blaze” on the offensive team. You don’t want to start trouble.

Pompey Festejo, San Jose State — “He could erupt at any moment!”– horrible announcer

Sir Thomas Jackson, Arizona — Or just “Stonewall.” He once got set up on a blind date with Dame Ndiaye by mistake.

Prinz Kande, Kansas — Someday, he will rule as King Candy and bring joy to children everywhere.

Efrem Oliphant, Houston — Unfortunate name for a big dude, and the “Efrem” cracks me up.

Hygens Succes, Florida — Wasn’t this the name of the government project that made us all drink fluoride in school?

An angry dude, a near-Shakespearean, a humorist, and the elephant hunter’s white whale. I don’t see these guys giving up much yardage.

Thurston Armbrister, Miami — Once you’ve had your arm bristed by this guy, you’ll never pass again.

Lyle Beloney, Army — Extra comedy points for the seriousness of his school.

Alex Matlock, Kansas — “And the case of the incomplete pass.”

Lafayette Pitts, Pittsburgh — I’m a sucker for a proper place noun as a first name.

Valtorrey Showers, Central Michigan — But he never takes a bath.

Cannon Smith, Memphis — His father was a blacksmith, but he wanted to specialize.

Lot of potential in this crew, if only they can live up to their names. (Get it?!) To round out the squad, here’s the offense from last time: