State of the Bluegrass: When Will Kentucky Football Finally Turn It Around? 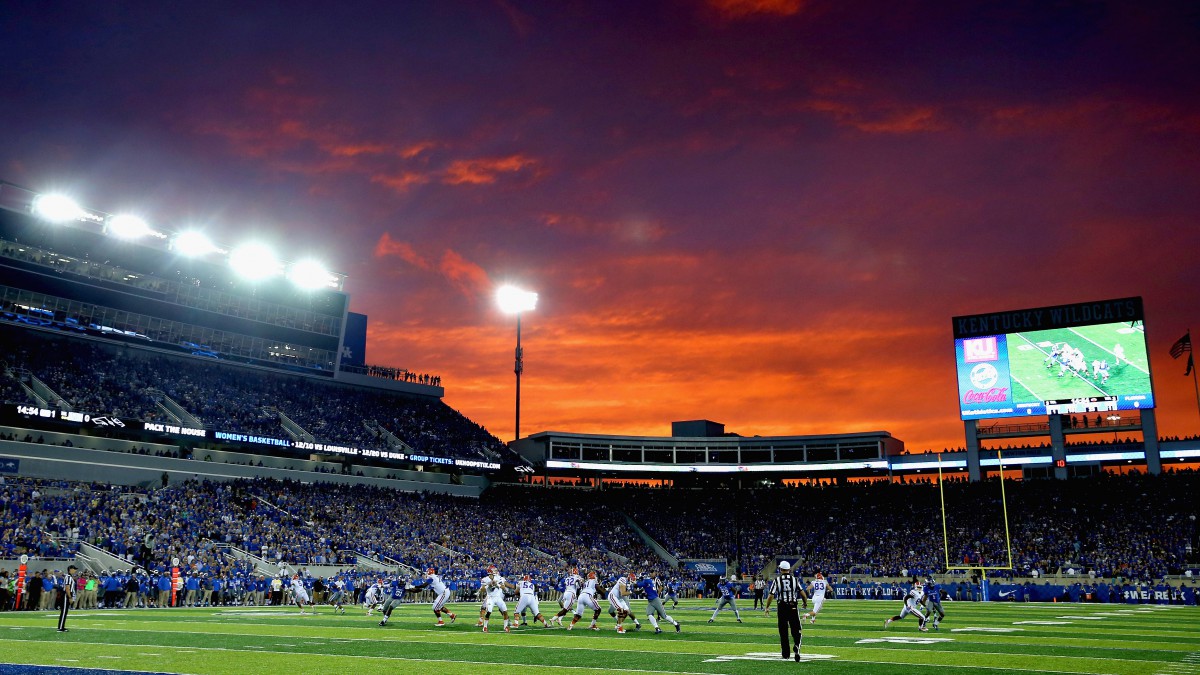 The heat has broken in Lexington; the humidity has not, and there’s just a touch of violence in the air. Toward the end of the season, this kind of day would produce a nasty squall; in mid-September, there is only the sense that the winds and spitting rain could turn furious at any moment, if they could just get blowing in the same direction.

The storm holds off, and the afternoon clouds and the walls of the freshly renovated Commonwealth Stadium take on the exact same pale gray cast. A sellout crowd is rolling in for the Kentucky-Florida game, undeterred by the threat of ill weather. There are more than a few basketball jerseys on display — you’d think Rajon Rondo were a former wide receiver — but most notable are the blue-and-white, game-specific GATOR HATER NATION T-shirts. A few years ago they would have felt like an overreach. Now they stand out.

Since a 1986 10-3 UK win in Lexington, Kentucky has lost 29 consecutive games to Florida, and any data set that large is bound to contain multitudes. There was the 1993 24-20 game, the year the Bill Curry–coached Cats had the temerity to come within a touchdown of Steve Spurrier’s Gators, which the Head Ball Coach followed up, as has often been his wont, by napalming the Wildcats, 73-7, the following year in Gainesville. This was followed by the worst shutout of the series, 65-0, in the Swamp two years later. And there was last year’s contest, a triple-overtime 36-30 affair featuring a very, very close no-call by the officiating crew.

The 2015 meeting will eventually become just another plot point on a long dotted line, almost entirely unremarkable — except for its historical context. This wasn’t the closest loss, but it was a chance to avenge one of the most deeply bitter defeats the Wildcats have suffered courtesy of the Gators. A win this year would’ve been a particularly poetic time to snap that streak.

And give the Wildcats this much: For a team fast approaching its third decade of abuse at the hands of a single opponent, victory never appeared to be all that far out of reach. But a 14-9 contest, won by not the best Gators squad to ever take the field, lost by not the worst Wildcats side, will soon be consigned to the particularly roomy dustbin of history that is the nation’s longest active streak of futility. It’s a bitter disappointment, but by Monday morning, head coach Mark Stoops has moved on enough to get a little philosophical. “I think what encouraged us is we didn’t play our best and we were in a one-possession game against Florida. I take nothing away from them; I think they had a lot to do with that, especially defensively. We’re not there yet. We are not good enough to not play our best. Against anyone. We know we have to scratch and claw, or we won’t win.”

It is flatly impossible to foresee a time in which Kentucky football will ever enjoy natural advantages in the East. The state isn’t densely populated enough to reliably produce rich harvests of homegrown talent — and must elbow for oxygen with division-mates (Florida and Georgia) that can cultivate their own native blue-chip prospects and boast more storied programs with sustained histories of success. Even while weathering a coaching change, the Gators won’t stay down long with all that talent on defense, and Tennessee’s entire roster won’t stay 19 years old forever. There’s not a great big window here in which Kentucky can clamor for relevance — but with Florida, Missouri, Tennessee, and South Carolina all in various states of upheaval, there is some breathing room.

“Big picture, I feel very good about where we’re at,” says Stoops. “Maybe not with wins and losses, but with the environment. Two sellouts in a row. The stadium’s done. We’re building a hundred-thousand-square-foot football complex that we raised the money for. We’ve had two very good recruiting classes. You put all that together and I feel ahead of schedule.”

There’s a new Wildcat identity taking shape in Lexington. Having trouble pulling all the kids you need out of the states to the south? Why not look to the north, into the talent-richer lands across the Ohio River? From a recruiting standpoint, the choice of Stoops has seemed like something of a no-brainer since his hiring in November 2012. You can’t buy or manufacture the kind of taproot ties the Stoops family has to Ohio, and with recruiting coordinator and fellow Youngstown native Vince Marrow, the Kentucky roster now holds 21 players from the Buckeye State, most of them underclassmen.

Breaking down players by home state is no cure-all, but it feels like something worth noting, because for the first time in a really, really, really long time, there’s something recognizable about Kentucky football. There are key players plucked from SEC territory — sophomore running back Boom Williams, sophomore defensive tackle Regie Meant, redshirt freshman defensive end Denzil Ware — who could conceivably form the bedrock of a team capable of competing in the conference. And there’s no such thing as a cakewalk schedule in this league, but UK does get eight home games this season and a draw out of the West (Auburn and Mississippi State) that could be a lot worse. It’s not fair to expect the Wildcats to be all that ready to seize divisional power, but it’s also very fair to say that this year gives them the best possible shot to jump up a couple rungs in the standings.

Because the current state of the SEC East, which might charitably be called “kinda assy,” could work to the Wildcats’ advantage. Since Florida’s last national title season in 2008, the West has taken every SEC championship game, alternating wins between Alabama and Auburn, with LSU helpfully putting in a 2011 appearance to break up the monotony. It is the West, now, that devours itself alive, while the East simmers in the background. 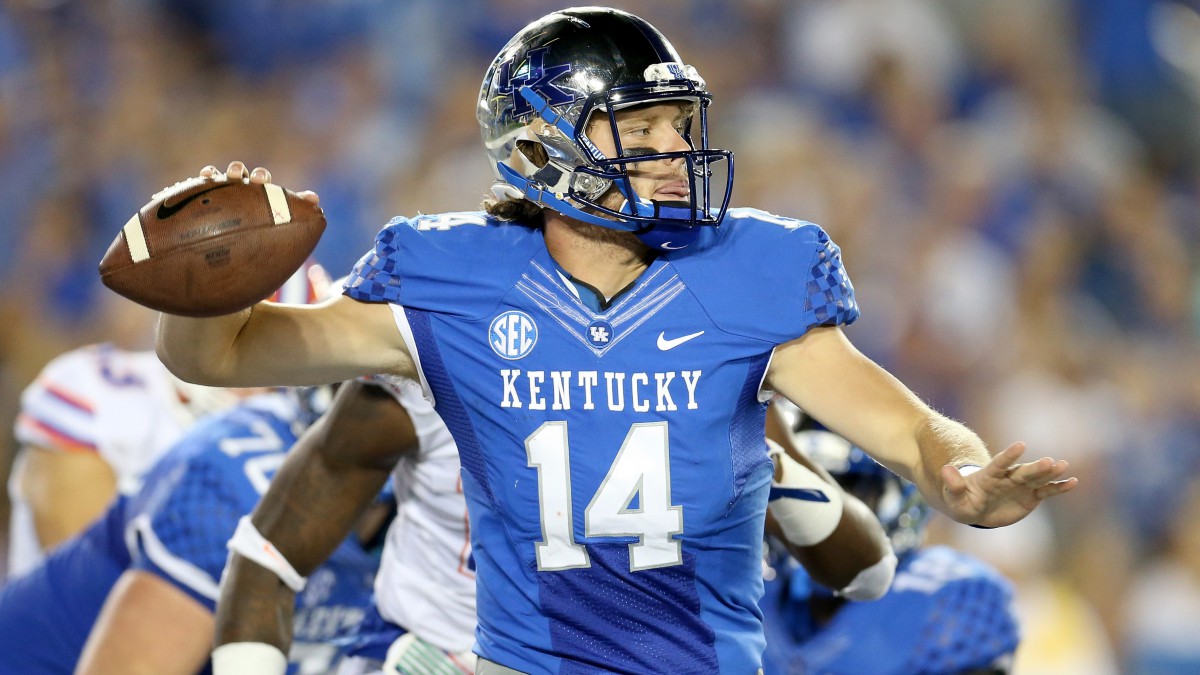 Andy Lyons/Getty Images Patrick Towles of the Wildcats passes the ball against the Florida Gators.

But since the league split in ’92, UK has enjoyed the double disservice of (a) playing a conference schedule that’s usually somewhat front-loaded, with Florida always coming early, and (b) not being very good most of the time. If the question is, “What’s the closest Kentucky has ever come to winning an SEC East title?” the answer is, “Probably 1993 or ’99.” If, however, the question is, “Has Kentucky ever been a factor in the SEC East race into November?” the answer is, “Unless you were seriously entertaining the possibility of some kind of superflu or other targeted bioweapon taking out Athens, Knoxville, Gainesville, and both Columbias simultaneously, while in the process sparing Lexington, no.” That could change with concentration, execution, recruiting, and luck — or that window could slam shut again, for who knows how long this time.

Stoops himself will hear none of this hopeful talk. He doesn’t want to discuss this season’s chances at reaching a bowl game for the first time since 2010, nor does he want to consider next season and watching his first recruiting class of significance hit its junior year. “The challenge comes in when you’ve got to play on such an edge all the time,” he says. “We’ve got to find that balance of being able to go out and play with that hair-on-fire mentality, but also a calmness about us. We won some games in our first two years playing on energy alone, and that’s just not going to get it done consistently.”

Stoops won’t even go so far as to set a “would be nice” benchmark for the 2015 win-loss column. “I’ve really been reluctant to put an number on that,” says Stoops. “Because if I say a realistic goal is six games, then what am I telling my team? That I’m conceding six games? We’re good enough to beat most teams on our schedule, if not all. But we’re not good enough to not play well and beat anybody.”

Just a handful of beaten somebodies would do, for a start. So far this season in the SEC East, only Georgia appears to be fielding a quorum of working parts of a football team. Florida made its own share of misfires against Kentucky. Two-time defending division champ Missouri currently boasts one of the worst offenses in the country. South Carolina is already two conference games in the hole, edged out by the Wildcats in Columbia and outright thrashed in Athens — and September’s not even over yet. Tennessee is studiously trying to recall what winning signature games feels like; and it is best, as customary, not to speak of Vanderbilt.

So. Who all feels like racing the Bulldogs for the next couple years to grab that ring? It’s an open question. And we’ll know whether the answer is “Kentucky” all too soon.

The Patrick Kane Situation Takes a Dark Turn in Buffalo

Nine Lives: Which Winless Team Will End Up in the Playoffs?