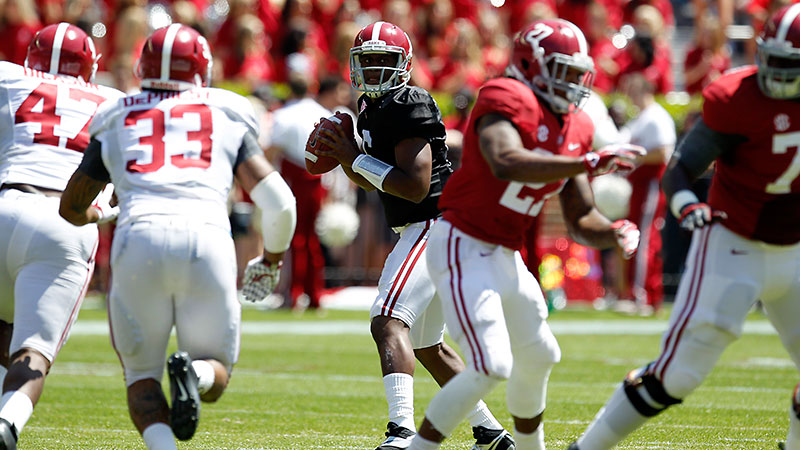 It’s a crazy time to be alive. If you disagree, you clearly haven’t been to a 2014 spring football game.

A TV timeout in a spring football game. I love this country.

In addition to featuring an ungodly number of TV timeouts, Ohio State’s annual Scarlet and Gray game initially carried a $20 price tag for entry. I know this because I attended the glorified practice, in which the Buckeyes’ offense struggled mightily, and after which I passed a middle-aged gentleman who was determined to let the whole world know how “pissed” he was with the play calling. (He was very pissed with the play calling.) He was super faded, but still: We’re talking about practice.

Clearly, college football fans take their ball seriously, no matter the season. So, the least we can do is hand out some awards to commemorate this spring’s achievements. Not for offseason supremacy, mind you, but for being interesting, which is half the battle with four painful months remaining until meaningful football returns. Let’s get to it.

Hottest Seat in the Game

Alabama, losers of two straight, billed its April 19 spring game as a “quarterback showcase,” because as much as the folks in Tuscaloosa despise passing, even they realize it’d probably behoove them to find a replacement for AJ McCarron at some point.

Unfortunately, Alabama’s spring game was not a quarterback showcase. In fact, it was the opposite of a quarterback showcase. Potential starter Blake Sims, who will compete with Florida State transfer Jacob Coker, completed just 13 passes on 30 attempts and threw two interceptions. ESPN.com’s Alex Scarborough astutely noted that backup Alec Morris had the best showing of any quarterback. The only problem? “He stood out most as a punter, booming 15 kicks for an average of 38.4 yards.”

If there’s a silver lining for Bama fans, it’s that Lane Kiffin is the new offensive coordinator, and he’ll be a convenient scapegoat if and when shit hits the fan. That guy’s been on so many hot seats, his ass must look like Jupiter. Tell me again why Vegas isn’t offering odds on another September Kiffin dismissal? HOLGO COMIN’. 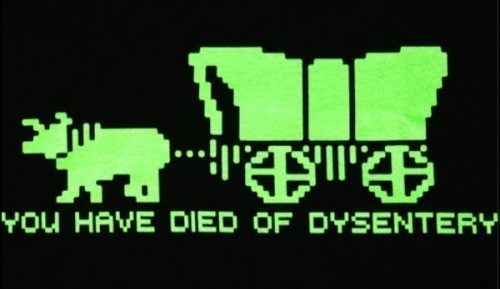 We’re sorry, Mizzou, but you have died of dysentery.

Like the Oregon Trail, the SEC is a merciless beast, and now the Tigers will have to find their way without Dorial Green-Beckham, former no. 1 overall national recruit and nonpareil maker of plays. With L’Damian Washington and Marcus Lucas also gone, Missouri has lost its top three receiving targets from 2013. Here’s what our proprietary graphical projection system is now saying about Maty Mauk’s 2014 Heisman potential:

If Al Golden is trying to turn The U’s 2014 campaign into a Baz Luhrmann–style shit show, he’s off to a fantastic start. Filmed with crystal-clear Schutt Vision Helmet Cam technology, the above video documents Miami’s spring game from linebacker Denzel Perryman’s point of view. It’s the Cloverfield sequel everyone’s been wanting. Meanwhile, we’re still crossing our fingers for two things: Uncle Luke becoming Golden’s official recruiting czar, and Seventh Floor Crew rebooting. Both things need to happen if Miami hopes to compete with the big boys in the ACC. You heard it here first.

What is Syracuse doing? Where’s the primary color? Supposedly there’s an orange-on-orange ensemble in the works, but it sounds like it’ll be worn only sparingly (if at all), and that’s unacceptable for a team named the ORANGE. More pressingly: What the hell is going on with that font? It’s incredibly slimming, and if you’re like me, you’re mostly watching football for the fat guy touchdowns. Phil Knight is a sizeist.

While the Alabamas and Penn States of the world crow about their staggering spring attendance numbers, I’d like to honor the fan base with the best grip on reality; the one that recognizes practice for what it is: not a game. That fan base is inarguably Georgia Tech’s.

Maybe there was an Atlanta Hawks fan convention going on at the same time? (I kid, I kid!) In a way, the real surprise is that 117 people actually did brave “40-degree wind chills and freezing rain” to watch a Paul Johnson–coached team scrimmage against itself.

This award came down to the wire, so we’d be remiss not to applaud our second-place finishers, Georgia fans, who weren’t particularly interested in what their team had to offer, either.

Leaving The Masters up during the G Day game as Bubba eagles. pic.twitter.com/R8Zj1nTdkg

Still, since no one tore an ACL, this was automatically better than every Bulldogs game from 2013.

Florida fans suffered through some pretty unimaginable horrors last season, so it might be tempting to forgive them for making the atrocious parody of Lorde’s “Royals” seen below. Do everything in your power to resist this temptation, because “Seminoles” deserves nothing but unceasing hellfire.

A few choice lines from the video:

“I’ve never been to Tally in the flesh / I know that everybody says it’s trashy.”

Anchorman’s true legacy: convincing an entire generation that calling something “classy” is the height of wittiness. Insidious. And who made you an arbiter of class, girl who prances around in public with an off-brand Gators jersey?

It’s at this point that our intrepid narrator throws caution to the wind and just starts humping a bunch of inanimate objects around Gainesville.

Not by Brent Musburger!

“Oooh, oooh, oooh, so they’ve got an Indian, but we’re crododilians.”

Either this video is a parody of the parody video industrial complex — in which case it remains completely objectionable — or a UF comedy troupe paid Pitbull’s ghostwriter real money to compose a song for it. I’m leaning toward the latter, because Pitbull’s ghostwriter is actually Will Muschamp.

Forget Colton Burpo: This video is all the proof we need that heaven is real. It features Akron AD Tom Wistrcill and head coach Terry Bowden yodeling back and forth to each other, and is way more stirring than anything on Upworthy. Akron VP of strategic engagement Jim Tressel should’ve been invited, though.

Never know what the day will bring: Today, it's a visit from the legendary @BillCosby. #WreckEm @TTUKingsbury pic.twitter.com/C34FlN2N8k

If Kliff doesn’t rock the black-and-red “Hello Friends” hoodie this season, we’ll know he learned nothing from Bill Cosby’s visit to Texas Tech.

Best Bet for a Comeback Season

Remember Gunner Kiel, the Dwight Schrute doppelgänger and comically indecisive quarterback recruit out of Indiana who was destined from birth to follow in Brady Quinn’s and Jimmy Clausen’s hallowed footsteps at Notre Dame? I doubt he’s crossed your mind since 2012, when another freshman, Everett Golson, led the Irish to an undefeated regular season and claimed the title of Program Savior for himself. Kiel transferred to Cincinnati in response, which seemed like an OK decision until Golson cheated on his finals, leaving the Irish with Tommy “Meh” Rees and some human driftwood at quarterback in 2013. Pete Campbell’s expert take on the situation: NOT GREAT, BOB.

But with his mandated year on the pine behind him, Kiel’s back, baby, and reportedly “highly motivated.” After viewing highlights of Cincy’s April 5 spring game, I can confirm this report. Kiel shredded his team’s own defense for 300 yards, and while you may be tempted to dismiss numbers accrued in a scrimmage as meaningless, it’s at least safe to assume he’ll enjoy some pretty epic practices this season. And practice makes perfect, or something. Consider yourselves warned, AAC coaches! (That noise you just heard was a straight-up whimper emanating from George O’Leary’s residence.)

In closing, we need to talk about the cat. Yes, that one. Because if you had asked me to rank FBS coaches by presumed feline friendliness a year ago, my power poll would’ve looked something like this:

Suffice it to say that our collective perception of Pelini’s day-to-day life didn’t include any time spent cuddling with kittens. After all, Tom Osborne didn’t reach the pinnacle of his profession by browsing LOLcats on 4chan all day.

But on the fateful night of January 6, 2014, everything changed.

@FauxPelini ok enough is enough… I want my cat back. You've had her long enough!

Never mind that a PR flack probably wrote that tweet, or that it was mostly a stunt to draw attention to the Nebraska program in the middle of the national championship game. Pelini was finally expressing his love of kitties in public, and that was reason enough to believe 2014 might be a different sort of year for the Cornhuskers. This belief was emphatically confirmed at the start of Nebraska’s April 12 spring game.

Lincoln-based seismologists recorded massive earthquake tremors at the exact moment Pelini raised Anya skyward, and numerous eyewitnesses reported seeing Bastet, goddess of cats, in line for a pretzel at halftime. My theory: When Nebraska used black magic to stun the Northwestern Wildcats last November, Pelini immediately seized control of the world’s cat population, which has been working feverishly (and, in some cases, supernaturally) to save his job ever since. Going forward, I’d think twice before doubting Cat Lord Pelini.