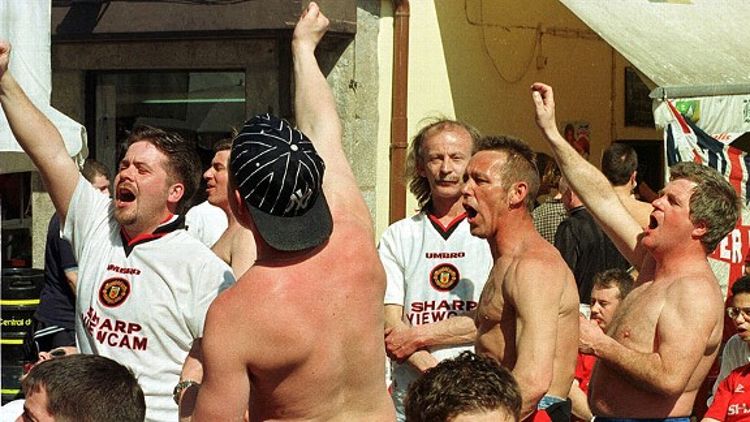 It began in a Welsh train station on a “misty, sleepy winter evening.” There, Bill Buford heard an announcement over the loudspeaker telling everyone to step back from the platform. Unusual, but not as unusual as the scene that followed: an approaching train full of Liverpool supporters, all singing a simple refrain — “Liverpool, la-la-la.”

“The words look silly now,” Buford writes on the first page of Among the Thugs, “but they did not sound silly.”

Frightened, Buford watched as police contained the supporters, barely, and prevented a violent situation. But his curiosity had been engaged, and he would go on to spend most of the 1980s immersed in English hooligan culture. That word, “immersed,” is bandied about with a permissive lightness in works of nonfiction, but this is no exaggeration — Buford was everywhere. He traveled with Manchester United supporters to Turin, Italy, where he watched them wreak havoc on the northern Italian town, destroying property, stealing whatever they could find, ambushing Italians who crossed their paths (including women and children), and glorifying their misguided sense of nationalism. He ran with English thugs through the streets of Sardinia during the 1990 World Cup, enduring a severe beating at the hands of three truncheon-wielding Italian policemen. He witnessed wild parties held by the neo-Fascist, whites-only National Front, weathered street fights between rival clubs in London, and was infected and even thrilled by the experience of a crowd becoming a mob.

This last element is essential. Because while the narrative structure of Among the Thugs is built around Buford’s soccer-thug anecdotes, the book is more concerned with a question and its proposed answer. The question: How can groups of individuals — who may be intelligent, reasonable, and charming on their own — transform into a mob capable of fatal violence? The answer, in Buford’s engaging prose: “It is not panic or fear or revenge. It is exhilaration…I am attracted to the moment when consciousness ceases: the moments of survival, of animal intensity, of violence…I felt that I had literally become weightless…that crowd violence was their drug.”

This is a book designed to horrify. There’s a slight romanticism attached to the image of the hooligan in America: They’re more passionate than us. They sing. They live and die with the club. And maybe, the implication goes, they should be admired and emulated. Buford will quickly disabuse you of that notion. When you read of a drunken Manchester United thug who feigns kindness to a curious Italian youngster, only to draw him near and knee him in the testicles, you will feel a visceral revulsion. When you read about a man named Harry, whom “it was impossible not to like,” and who, in a fit of rage, knocked a policeman unconscious and proceeded to suck his eyeball out of its socket — an act so barbaric that I’ve only ever encountered it in a Cormac McCarthy novel — the sensation will double. And sooner or later, you’ll realize that the violence is distant from the soccer.

But strangely enough, Among the Thugs will also make you laugh. Take the moment when Buford meets Mick, a “repellent specimen” with “a fat, flat bulldog face” and “puffy, doughy arms” who would first bring him into the hooligan fold:

I introduced myself. I was writing about football supporters. Did he mind if I asked him some questions?

He stared at me. Then he said, “All Americans are wankers.” And paused. “All journalists,” he added, showing, perhaps, that his mind did not work along strictly nationalist lines, “are cunts.”

We had established a rapport.

But more than the horror, the philosophy, and the humor, this is an incredible story about people whose motivations, on the surface, are almost impossible to understand. I began re-reading Among the Thugs on a Thursday afternoon and finished six hours later, unable to pause even on a second pass. Thanks to Buford’s courageous reporting and consistently brilliant prose, every scene is experienced vividly. The hooligans (they hate to be called that, by the way; they’re football supporters, even when they’re smashing store windows and grunting like apes to heckle a black player on the pitch) harbored initial suspicions about Buford’s motivation, but they soon embraced him as a “good geezer” due to his steady presence amid the violence. Before Buford became familiar with the adrenaline rush of the mob experience, he managed his fear and secured his place in the group by repeating the words “I will not shit myself” as he went into battle. His memory for all that happened in those euphoric moments is the thrilling backbone of the book.

England does not fare well. In Buford’s telling, there is a dichotomy between the upper classes, who are ignorant about the country’s festering reality, and the working classes, who are left with little more than rage as the substance of their existence — industrial jobs, mostly — disappears. They long for a collective identity, but the most they can manage is to disgrace themselves over and over at soccer matches, leaving the dead and injured in their wake. Despite being embedded, Buford develops little affection for what he calls “a nation of little shits.” As he watches one of them terrorize a peaceful plaza in Sardinia, he asks a question that can’t be answered:

“What social mutation has resulted in these bored ugly boys of the Union Jack believing they are entitled to inflict this pain, this fright?”

But it transformed him, too. Among the Thugs describes what can now be called a different era in English soccer. The caged terraces, breeding grounds of so much violence and ugliness, have been torn down in all the major stadiums. Higher ticket prices have had the effect of keeping out the poor, undesirable elements. But these people haven’t disappeared, as the London riots earlier this year proved. This suggests that the sociological value of the book hasn’t diminished, even if the violence has moved away from the pitch. It’s a chronicle of how any of us — poor English, yes, but also, perhaps, affluent Americans in a quiet Pennsylvania college town — can ditch our humanity and lose ourselves in the seduction of the mob.

Previously in this Series:
Ghosts of Manila
Sports Book Hall of Fame: The Inaugural Class

Kentucky's Kids Grow Up Against Kansas