Kentucky’s Kids Grow Up Against Kansas 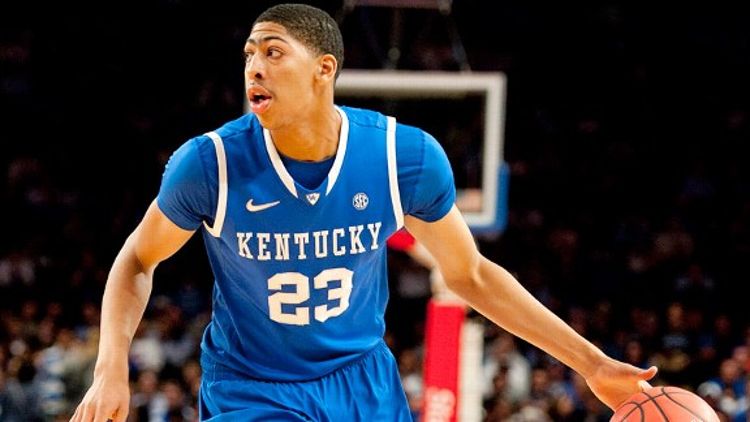 Obsessively combing through information on high school basketball players has never been the coolest of hobbies. Outside the fungal patches of obscurity that grow in the crevices of the blogosphere, it is the pastime of someone with too much time on their hands and not enough imagination to use it constructively. You could be memorizing digits of Pi or playing the air harpsichord. For most sports fans, those talented 17-year-olds are just names with exaggerated dimensions and statistical accomplishments that sound fictionalized. Did you hear how Darvious Smithstein had a quadruple-double in the Altoona Class D semifinal — and all in the second half?

While the availability of YouTube highlight reels gleaned from summer leagues and high school games makes these players more recognizable than Yetis, it’s impossible to really discern the level of competition. As anyone who was once a white kid of moderate height knows, clips of looming big men dominating against white kids of moderate height aren’t that impressive. Of course, this element of uncertainty is what makes highly touted freshmen so exciting.

Most experts consider Kentucky’s 2011 recruiting class the finest in the nation. Marquis Teague is thought of as the best point guard in his class. Michael Kidd-Gilchrist is arguably the top forward. Kyle Wiltjer is regarded as a top-30 recruit, and in all likelihood will barely play.

But the prize of the bunch is Anthony Davis, a 6-foot-10 forward from Chicago who played guard as a high school junior before sprouting eight inches. He grew only vertically, and has a physique resembling one of those inflatable men that wiggles in front of car dealerships. YouTube clips of his schoolboy highlights are exhilarating: He ropes in rebounds, dribbles the length of the court with loping strides, pikes dunks, and catapults opponents’ shot attempts off the backboard. Imagine Marcus Camby with Lamar Odom’s skill set, or what Jonathan Bender was supposed to be. While all five of the Wildcats’ starters are slated as lottery picks, many believe that Davis will be the top selection in next year’s draft.

The game was the nightcap in the State Farm Champions Classic, an event that started with a matchup between Duke and Michigan State. The convergence of fans from four powerhouse programs in Midtown Manhattan was a bit like a scene from The Warriors: longtime rivals clad in gang colors, uneasily amassed on neutral turf.

Some of the crowd leaked out following the Duke game and the congratulatory hugfest for Coach Mike Krzyzewski’s 903rd win, but the remaining fans were drunk enough to create suitable noise. It was odd to see the Garden overrun by out-of-towners instead of grumbling Knicks loyalists. In fact, many of the Kansas fans looked the part of displaced prairie people. There were stern older men with sun-leathered faces and hen-like wives; younger guys wore goatees and bent-brimmed snapback hats that were probably not inspired by Big Sean or Tyga.

The Wildcats faithful, who bathed whole sections of the Garden in matching blue T-shirts, heavily outnumbered these salt-of-the-earth types. Like Mongol hordes, they travel in legion.

Along with Davis, Kentucky started Teague and Kidd-Gilchrist. This would be an unusual dedication to youth for a championship contender ranked second in the country if it wasn’t coming out of Lexington. The inexperience was obvious early on, as Kansas raced out to a 9-3 lead. Whether due to the jitters of playing in Madison Square Garden or the defense of a quality Jayhawks team, the trio of freshmen spent much of the first half bricking shots and turning the ball over with generosity befitting a canned-food drive.

Teague, in particular, was wildly ineffective. He’s blessed with slippery quickness that leaves defenders wrestling with air, but played last night with the savage anarchy of a bag full of chainsaws. On the way to six turnovers, he bungled a behind-the-back move and threw the ball away after darting into the lane with a nifty crossover.

Early on, Kidd-Gilchrist missed a jumper, traveled, and botched a finger-roll in transition. Davis meekly flung up a 3-point attempt and spent much of the first half drifting around the perimeter. After a timeout in which he was clearly instructed to explore the paint, Davis tip-toed around the lane like an accountant on hot coals during a corporate wilderness seminar. It was the Wildcats’ veterans — if one considers sophomores Doron Lamb and Terrence Jones to be crusty old-timers — who kept the game from completely unraveling.

Even when ineffective, Davis is compelling to watch. He has a 7-foot-4 wingspan that seems underestimated. Due to his mobility, he’s less of a stationary intimidator in the paint than a tsunami of arms that roars in from the weak side to fling shot attempts into the bleachers. On offense, he reaches up and dunks anything floating around the rim. But he is extraordinarily thin. For most of the game, Kansas players with grown-man strength outmuscled him. Thomas Robinson, a refrigerator-shaped forward, left him flailing on a predictable spin move 15 feet from the basket. On another play, Jeff Withey, the Jayhawks’ center, flicked Davis aside for an easy putback dunk.

Davis’ lack of traditional physicality was apparent on the offensive end, too. He set screens as if hoping to ensnare defenders into his thicket of limbs and posted up with the fervor of a man waiting in the rain at a bus stop. He has the brittleness of balsa wood, and collapsed to the floor in a pile of timbers thrice while trying to box out opponents during free throws.

Despite the invisibility of Kentucky’s three freshmen, the game was knotted at 28 at the half. Then, as if coach John Calipari installed upgraded software into their brains during intermission, the youngsters emerged in the second half as machines of destruction.

In the opening minutes of the period, Davis had two dunks off lobs and a pair of blocks, the second of which sent the ball sailing eight rows deep into the howling Garden crowd. Teague jetted out on a fast break for a two-handed dunk, and seconds later scored again on a layup in transition. Kidd-Gilchrist collected chunks of a stat-line that included 12 points, nine rebounds, four assists, three blocks and a steal. The game had turned, its ending was inevitable, and the freshmen were now part of the strutting, preening Wildcat phylum.

These kids have so much potential that their talent eventually turns kinetic. They’ll spend parts of games playing with the omnidirectional chaos of young Dobermans pulling on different leashes, but they’ll eventually rip you to shreds.

By the time Kentucky’s lead soared to 17, most of the Kansas fans headed for the exits. The closing minutes were filled with intoxicated booing as remaining parties bellowed in irritation at foul calls that extended the Tuesday-night game past midnight. Following the Wildcats’ 10-point win, their fans wandered eastward down 33rd Street toward a series of junky Midtown bars that had strung up Kentucky flags as beacons for frat-style boozing. They had turned Madison Square Garden into their home court for an evening, but were tourists once again.

Previously by Ben Detrick:
Why Syracuse Will Win the National Championship
Sounds of the City: The Big East’s Musical Legacy

Must Watch: The German National Soccer Team In Reverse