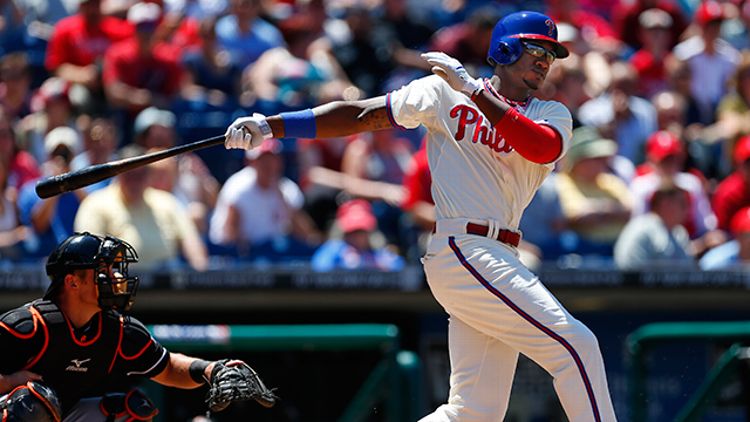 We’re less than a month away from the MLB All-Star Game, which means writers are starting to fill out their ballots, both actual and virtual. Since the Roster Doctor focuses on the roto world, we figured we’d focus on the fantasy all-stars. We’re looking for players who have not only put up huge numbers but also generated huge profits, going from late-round/low-dollar picks on draft day to fantasy superstars — at least through the first 12 weeks of the season. We’ll also take a crack at the more important question: Can they keep this up?

C, Evan Gattis: He ranks fourth among NL catchers according to ESPN.com’s Player Rater, trailing only Yadier Molina, Buster Posey, and Wilin Rosario. Molina and Posey fetched top-dollar/high draft slots at every auction and draft, while Rosario got his share of love after cranking 28 homers in his rookie season last year. Meanwhile Gattis was drafted … nowhere, unless you’re in a Braves-only fantasy league where cool nicknames and unbelievable backstories count as categories. Gattis is ranked second among all catchers in homers (14) and tied for third in RBIs (37).

Of all the players on this all-star team, Gattis is the one least likely to retain his value: He lost his starting job when Brian McCann returned from the disabled list, he’s two for his last 26, and he’s now on the DL himself with a strained right oblique. Of course everyone else in your league knows these things, too. In deep leagues — especially those that start two catchers — you still need to keep Gattis for some pinch-hitting magic, plus whatever work he can get at backup catcher and occasionally in the outfield. The alternatives at second catcher in 12-team NL-only leagues or deep mixed leagues are limited to Jamie Quirk and a bag of wet noodles.

1B, Paul Goldschmidt: Hitting more than .300 with 17 homers, 62 RBIs, and on pace for double-digit steals for the second year in a row, Goldschmidt would be the starting first baseman on the fantasy all-star team even if he weren’t a relative bargain at the draft table this year (in my 18-team mixed, non-keeper league, Goldschmidt went for $25 … and Joey Votto went for $43). Goldschmidt might even have a case for real-life starting All-Star first baseman: Votto and Goldschmidt are running a close 1-2 in Wins Above Replacement, Weighted On Base Average, and pretty much every other stat. Given the progress Goldschmidt has shown each year, there’s no reason to expect this isn’t real, or to sell high.

2B, Daniel Murphy: This one’s a bit trickier. Going back to our friend the Player Rater, Murphy ranks third in fantasy production among NL second basemen, trailing Brandon Phillips and Matt Carpenter. Phillips was (rightfully) considered an elite commodity in most drafts, and we have plans for Carpenter elsewhere. That leaves Murphy, who’s putting up a kind of poor man’s retro Placido Polanco season: solid batting average (.275), double-digit paces for homers and steals, decent chance to threaten 100 runs scored. The skills have been there for a while, with Murphy hitting .291/.332/.403 last year, swiping 10 bags and roping 40 doubles. He’s batting second in the Mets lineup, good news for that runs scored total and lousy news for his RBI potential. The Mets’ new leadoff hitter is discarded Rockie Eric Young Jr., which means Murphy will be batting behind two straight pitchers, more or less.

3B, Matt Carpenter: A stealthy sleeper on draft day because of his versatility (he qualifies at 1B, 2B, 3B, and OF) and on-base ability, Carpenter has walloped expectations, hitting .314/.396/.454 while playing every day for the first time in his relatively short big league career. His .352 batting average on balls in play ranks in the top 20 among all NL hitters. That stat’s supported by Carpenter’s batted-ball profile — only Freddie Freeman has cranked line drives at a more prolific rate among NL hitters. Carpenter’s a great player to own, and not a superstar, but savvy owners will have likely become too attached to give him up at this point.

SS, Jean Segura: Along with starting pitcher, this was the most hotly contested position. Though Everth Cabrera just hit the DL, you can’t complain much about a .305 hitter who’s tied for the major league lead in steals and went undrafted in many standard mixed leagues. Still, we’re going with Segura by a nose. In addition to being even less respected on draft day (Cabrera fetched $10 in our 18-team auction, Segura just $4), Segura has also flashed all-around skills that Cabrera can’t match. The Brewers shortstop ranks fifth in the majors with 20 steals … but he’s also hitting .329 (trailing only Troy Tulowitzki among NL shortstops), with 10 homers (again second only to Tulo), 40 runs scored (second to Tulo), and 30 RBI (third behind Ian Desmond and … you can probably guess). Segura’s been one of the least patient hitters in baseball, posting a walk rate of just 4.1 percent. But he also ranks among the league leaders in contact rate (more than 85 percent), uses his speed to leg out lots of infield hits, and his power, while surprising, looks like it might be real, given the shots he’s hit over the wall in the gaps and even to straightaway center. If someone offers an elite package in return, listen. But if the rest of the league’s expecting Segura to collapse over the next 93 games, you’re better off just keeping him right where he is.

OF, Carlos Gomez: He’s no. 9 overall on the ESPN Player Rater and tied for second among all position players in Wins Above Replacement, yet Gomez doesn’t have anywhere near the cachet of the Mike Trouts and Miguel Cabreras of the league. We’re nearing the point where we have to grant him that status, or at least something close. Long considered a Gary Pettis type with Gold Glove–caliber defense, lousy OBP, and middling power, Gomez took a moderate step up last year, hitting .260/.305/.463 for a career-high .329 wOBA. This season’s numbers have been something else altogether: a .317/.356/.583 line, with Gomez on base to shatter all of his previous power thresholds. It’s tough to say if that element of his game is real or not; Gomez has long been regarded as an ultra-toolsy player whose tools also included power. That he’s on pace to top 80 extra-base hits might be a stretch, though. Again, what you do with Gomez depends on his market value: If your leaguemates truly consider him a top-10 player, see if a Clayton Kershaw might be available in return. If not, ask yourself how the Brewers could be 12 games under .500 with Segura and Gomez on the same roster.

OF, Domonic Brown: A classic post-hype sleeper, Brown never got a clean shot at a starting job until this year — and he’s now running with the opportunity. Some of it’s a self-fulfilling prophecy, since any player who belts 19 homers in his first 72 games of the season is going to keep his job. I’d be a little skeptical of Brown for the rest of the year, though: He strikes out more than three times as often as he walks, which could invite a situation where pitchers simply refuse to challenge him anymore.

OF, Starling Marte: The #MartePartay is in full swing, with the Pirates leadoff man on pace to threaten 50 stolen bases, with a home-run total somewhere in the low teens and about 100 runs scored. An oblique injury knocked him out of the lineup for three days, but Marte’s now back, albeit with seven strikeouts in his past four games. A good chunk of Marte’s success, oddly, has come for his tendency to get plunked: Only Shin-Soo Choo can top Marte’s 14 times getting hit by a pitch this year. But if Brown’s plate discipline is a little shaky, you have to wonder what’ll become of a leadoff hitter with a 4.4 percent walk rate and 22.5 percent strikeout rate. After a blistering start, Marte’s also been smacked by regression, hitting just .234/.298/.321 since May 9. Marte is far from a finished product at age 24, and he’s a volatile commodity while he learns the strike zone.

SP, Patrick Corbin: It’s agonizing not to pick Matt Harvey or Shelby Miller, but prospect hounds were on Miller this year, and especially on Harvey. Not so for Corbin, perceived as the next soft-tossing lefty to come out of the Arizona system, only likely to lack Wade Miley’s near–Rookie of the Year results from 2012. Instead Corbin has managed to top Miley’s big ’12 season, going an amazing 9-0 with a 2.28 ERA through his first 14 starts. Corbin’s 80.9 strand rate is well above the league average in the low-70s, and Corbin’s five homers allowed in 94⅔ innings makes you wonder if he’s just on a big string of good luck, given his relatively pedestrian peripheral stats. Though Corbin narrowly wins the fantasy all-star slot here, you should be far more interested in owning Harvey or Miller and their superior under-the-surface stats for the rest of 2013.

RP, Jason Grilli: Lousy timing, as Grilli blew his first save of the season on Wednesday. Still, read that again. A 36-year-old right-hander with five saves heading into this season, re-signed dirt cheap when few if any teams wanted him, saved 25 games before his first blown chance. Grilli’s numbers are obscene: 1.10 ERA, 0.88 FIP, a strikeout-to-walk rate of nearly eight-to-one, and a fastball that’s improbably ticked up over the past few years to an average velocity of 93.5 mph this season. In standard mixed leagues, you can always trade Grilli and look to capitalize on the next Edward Mujica–type situation that comes down the pike. But in deeper leagues, there’s no reason to panic and think you must sell high on Grilli. Though his track record as an elite closer is far shorter than that of Mariano Rivera or Jonathan Papelbon, nothing in Grilli’s statistical profile over the past couple years should make you think that a reckoning is coming.