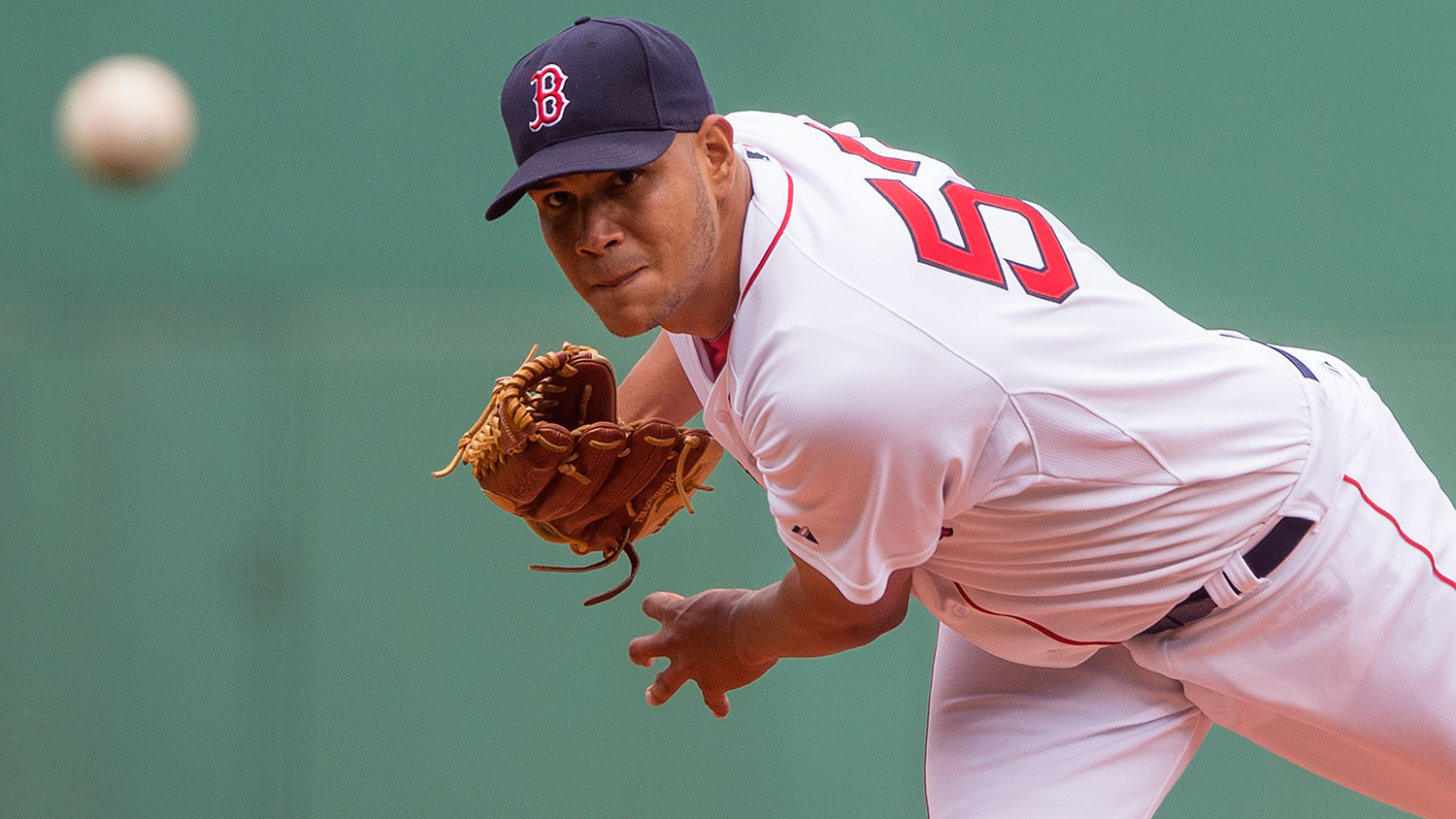 Should you buy the American League’s two hottest call-ups? Can you still find cheap steals? Is it possible to own too many players on the same team?

The Roster Doctor is in, and he’s ready to answer all of these questions and more! Let’s go to the mailbag.

I play in a deep mixed league (18 teams, no keepers) and am on the playoff bubble. I’ve been offered Joey Gallo and Eduardo Rodriguez for Jake Arrieta.

Knowing Gallo and Rodriguez could both be back in the minors by the All-Star break, is the short-term benefit of the two hot-shot rookies worth moving a reliable-but-unspectacular pitcher?

I love this question for two reasons: (1) Trading a veteran for two rookies creates an inherently interesting dilemma, and (2) I completely disagree with your assessment of all three players!

Let’s start with Gallo. The biggest factor that seemed to be working against him when he was called up Tuesday was time. Starting third baseman Adrian Beltre had hit the disabled list, and Gallo figured to be up for only those 15 days. Except, his first two games in the big leagues have been incredible. He’s already homered twice, making him the first rookie since 2011 to go deep in each of his first two games. He’s also singled, doubled, walked, scored four runs, and knocked in five. As Ben Lindbergh detailed in his feature on Gallo last year, this is a kid who will strike out a ton — while he’s reached base five times in his first nine times up, those other four plate appearances were all strikeouts — but you can count the number of sluggers who are a threat to go upper-tank every time up on one hand, and Gallo’s one of them. The 21-year-old phenom’s hot start, combined with Wednesday’s news that Josh Hamilton will miss a month with a hamstring injury, has opened the door for a longer stay than initially anticipated. Whether Beltre’s injury lingers, Gallo takes over for Hamilton in left field, or the kid works his way in at first base or DH, the suddenly contending Rangers would be foolish to send him back down. He certainly could be back in the minors by the All-Star break — or sooner —  but it’s already looking less likely than it did at the beginning of the week.

Rodriguez has an easier path to sustained playing time, for one simple reason: He’s the only current Red Sox starter with a hope in hell of becoming a star. On a last-place team that’s performed poorly in every facet of the game, Rodriguez has been a beacon of hope, striking out 14 batters in his first two starts while allowing just one run on five hits. With electric stuff, an impressive minor league track record, and a complete lack of competition for his job, it’s tough to see the 22-year-old going anywhere unless he gets hurt.

As for the notion that Arrieta is “unspectacular,” he ranks fifth in strikeout rate, eighth in ERA, and third in FIP among all National League starters since Opening Day 2014. If we can treat Corey Kluber as an elite starter after one year plus two months of standout performance, we have to do the same with Arrieta, who’s been just a half-notch less impressive during that same span.

So, should you make the trade? It’s risky. Arrieta is obviously the most stable commodity of the three. Both Gallo and Rodriguez offer just two games of major league track record, and the risk of demotion is there, even if it might be waning by the day. In a keeper league, you make this trade in a heartbeat. In a one-year league, I’d ask for a third player to sweeten the deal. If the other guy refuses, though? Screw it, take the plunge. If you’re a bubble team, it makes sense to make a high-risk, high-reward move. And if Gallo and Rodriguez can keep producing anywhere close to this level, the rewards could be enormous.

In his first season, Semien’s putting up big numbers at a woefully thin position. He’s currently fourth, behind the tightly bunched pair of Jhonny Peralta and Hanley Ramirez, among fantasy shortstops on ESPN’s Player Rater. However, the shortstop who’s separated himself from the pack at no. 1 is none other than Crawford, a godsend for both fantasy teams and the Giants offense.

Weighing the two Bay Area shortstops against each other, Crawford’s hitting for more power and walking more, but the difference in their fantasy value comes entirely down to RBIs, which in turn comes down to situational numbers. Crawford’s batting a ludicrous .389 with runners on base and .357 with runners in scoring position, while Semien’s at .221 and .214 in those spots. That’s likely a fluke in each player’s case, and you should expect those numbers to regress toward each other as the season goes on.

So if you’re trying to target one of the two to upgrade your weak shortstop spot, Semien will steal more bases, his team- and context-dependent counting stats should start to catch up to Crawford’s, and he might cost a fair bit less in a trade.

I’ve become far too Cubs-heavy. I’ve got Starlin Castro, Kris Bryant, and Addison Russell in a 15-team, 5×5 keeper league. I expected Bryant to come this year, but thought I might have a year or so before Russell came. Obviously my only choice is to move Castro, especially since I’ve got Jhonny Peralta. What can I realistically expect for him? Third outfielder? No. 3 rotation guy? A half-eaten Sweet Onion Teriyaki sub because everyone can clearly see my predicament?

As someone whose first job was working at Subway as a 13-year-old, I’m mystified whenever someone doesn’t choose the meatball sub. Also, I was both hired and fired by my own uncle, because I was a totally incompetent employee. Do you how know hard it was for a shiftless teenager to cut those boat-shaped holes out of the top of a roll?!

Oh wait, this was a baseball question. OK, so I don’t get the aversion to owning multiple players on one team. Would you pass on owning, say, Clayton Kershaw, Zack Greinke, and Adrian Gonzalez? Good players are good players, and having many of them on the same ballclub isn’t a problem.

With that said, I’ve never been a huge Castro fan, and I can’t even get excited about him in a keeper league, where a 25-year-old shortstop theoretically offers a ton of value. Castro doesn’t walk much, so you get a lukewarm .306 OBP, which in turn hurts his runs-scored numbers. We’ve been talking about his power potential for years, but he’s still sitting on a career-high of 14 home runs.1 And after swiping a combined 47 bases in 2011 and 2012, he’s failed to crack double digits in any season since. Castro does rank in the top 10 among shortstops on our trusty ESPN Player Rater, but far less famous players like Jace Peterson and Wilmer Flores aren’t far behind him. If you can find an owner desperate at shortstop who’s still drinking the Castro Kool-Aid, go ahead and do it — a strong, relatively young no. 3 starter for a pitching-weak team could be a viable return.

I’m looking to pick up the pace on stolen bases in a roto league for the rest of the season. Who are some players I should be targeting in trades and who should I pick up off the waiver wire?

Obviously, a lot of this depends on how deep your league is, because in deeper ones, it’s always a huge challenge to find big steals guys languishing on the waiver wire. In shallower leagues, check to see if Delino DeShields Jr. or Billy Burns can be had. In deeper leagues, Cameron Maybin or Ender Inciarte could goose your steals total without crushing your other categories. And if you’re really desperate, Jose Ramirez and Chris Owings will swipe a few and provide some value at the black hole that is shortstop, but they’ll also pollute your batting average and power categories.

With Joc Pederson and Jacob deGrom off to hot starts, are they guys you would keep or sell high?

Having written love poems in his honor both for Grantland and on Twitter, I’m an unabashed Joc fan. But he is surface-of-the-sun hot right now, becoming the fifth Dodger ever to homer in five straight games last night. Given that four of those games came in the preposterous, pitcher-smushing stadium that is Coors Field, you have to take that streak with a grain of salt.2

When we talk about selling high, we’re not saying that a player’s going to turn into a bum. We’re just saying that trading him during an unsustainable upswing could bring back more value than he’ll ultimately be worth come season’s end. I remain bullish on Pederson, just as I am on deGrom. But I think you could get a king’s ransom for the Bashing Boychik right now, and in the end, what’s fantasy baseball all about? It’s all about arbitrage.

'The Ropes' Podcast: Cotto-Geale Preview and an Interview With Timothy Bradley Jr.