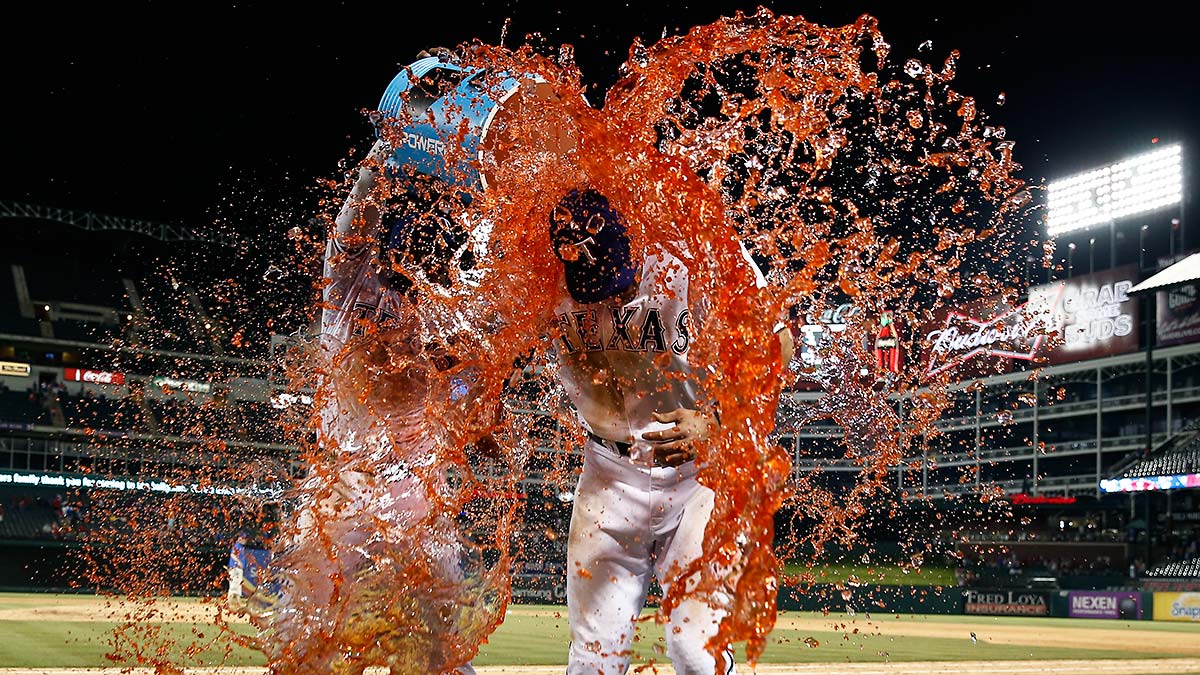 There are some left-handed power hitters whose swings make me think about music. The young Ryan Howard and Ken Griffey Jr., for instance, had long, graceful strokes that started up high, then arced down through the strike zone before exploding back up and around with a dramatic flourish, like something Mozart would write for the clarinet.

Joey Gallo, a top-10 national prospect who went 3-for-4 with a homer and four RBIs in his highly anticipated MLB debut for the Rangers on Tuesday night, doesn’t have a swing like that. Gallo’s swing makes me think of physics, of how the force applied near the fulcrum of a lever is multiplied. Considering Gallo’s strength and the length of his arms and the bat he wields, there must be an apocalyptic quantity of energy transferred from muscle to bat head to ball.

Truthfully, it’s hard to get too worked up about the beauty of Gallo’s swing, because it’s kind of hard to see at regular speed. The ball floats over the plate, and then there’s this blur, and all of a sudden, the camera’s looking at the second deck of the right field seats.

Gallo was already something of a folk hero before his debut, thanks to the now-notorious Truck Homer that he hit during batting practice at last year’s Futures Game, and collecting hits in his first three major league at-bats was almost pornographic for prospect fanatics and beleaguered Rangers fans alike. Imagine that: Adrian Beltre, a Hall of Fame–quality third baseman and one of the most exciting players in the game, gets hurt and has to go on the DL, but it’s OK, because the temp might be even more entertaining.

“That easy? For real, it’s that easy?” Rangers catcher Carlos Corporan said to assembled media after the game. “We lost one of the best players and we bring that guy from Double-A, and to perform the way he did was freaking awesome.”

Gallo’s home run off White Sox starter Jeff Samardzija made a wholesome, clear crack off the bat, like the sound you’d get if you swatted a housefly with a shoe — a big, all-American crack. But even that noise feels insufficient: Contact the likes of which Gallo creates should come with some sort of mechanical whine, and then a two-stage concussive bang, like a jet engine exploding.

And Gallo’s still just 21 years old. At his age, a normal human would have another year of bulking up on meal plan chicken fried steak before entering the professional world — Gallo’s already performing upper atmospheric research with Samardzija’s fastball. I don’t know what’ll happen if Gallo gets stronger. We could be looking at years of broken bats on checked swings, or balls hit so hard they disintegrate in flight.

Gallo gets mentioned alongside Cubs wunderkind Kris Bryant a lot, because they’re both very large third basemen, and because they were probably the top two power-hitting prospects in the game entering the season. Gallo’s not quite at Bryant’s level thanks to Bryant’s superior all-around athleticism and Gallo’s preposterous strikeout rate. But that doesn’t really matter a lot right now.

What matters right now is that watching Gallo is fun. I’ve got a long-standing fear that’s been concern-trolled into me over the course of years by people who say that baseball’s enlightenment might one day take the fun out of the sport. This is a preposterous line of thinking, as information is power, and as we advance in knowledge, we grow as a society. Plus, it mirrors a line of thinking that sprang up as a backlash against the actual Enlightenment several hundred years ago, but fortunately, all of the people who thought it back then aren’t around to bother us anymore.

Even so, the default position for the modern baseball analyst, one who knows numbers and mechanics and prospect rankings, is that nothing is as good as it seems — and this is a smart position to take, because it’s usually true.

So, no, Gallo won’t be as good as Bryant, let alone Bryce Harper or Mike Trout. Even if Gallo hits 45 home runs a year, he’ll probably strike out once every three plate appearances. But every once in a while, it’s healthy to turn off the skeptical part of your brain and allow yourself to be awed by the spectacle.