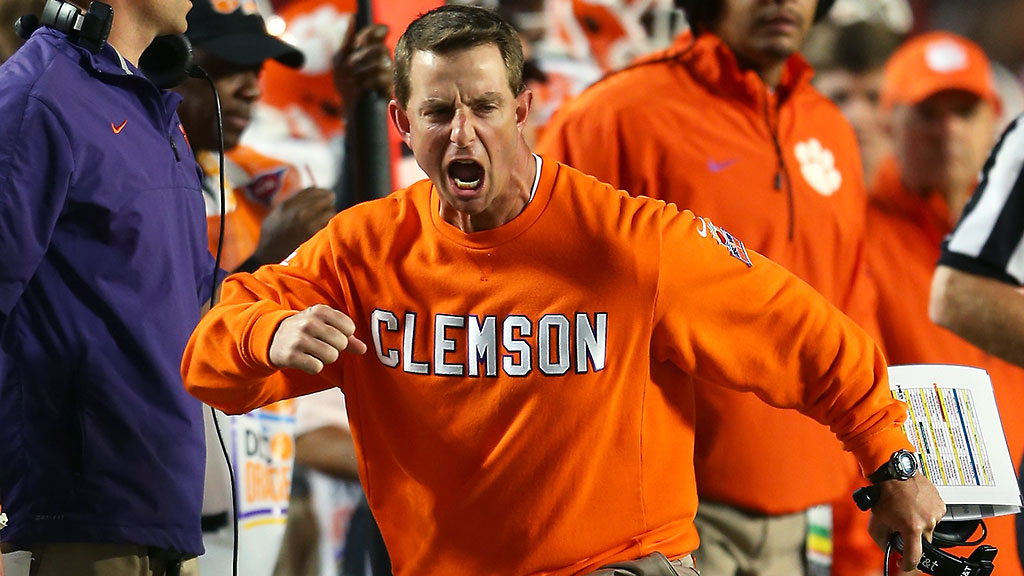 Rich Rodriguez is fixing to get himself a fat ’n’ fluffy contract extension at Arizona, which is nice for the Wildcats, who will get to keep him as the coach of their fine football team. It is also nice for you, Joe Football Fan (so your mother’s maiden name was Football?), because regardless of your particular allegiance, you have to agree that the more videos like this Arizona dispenses into the world, the better. And it’s very nice for Rodriguez, who stands to make a lot of money in some very interesting ways.

One particular detail of Rodriguez’s deal has caught some attention, as his buyout will reportedly double if he leaves Arizona to return to West Virginia. Ultra-specific clauses like this are far from unusual in big-money coaching contracts, though. (Did you know, for example, that Todd Graham’s buyout triples if he leaves Arizona State for Arizona State?) Through public records searches and the powers of imagination, we’ve collected our favorites below:

Cincinnati’s Tommy Tuberville: Had a clause inserted that permits him to sell Hamway, the pork-based peer-to-peer selling system changing the way we consume hog.

Clemson’s Dabo Swinney: Buyout is waived if he can sit quietly for 10 minutes. It is ironclad.

LSU’s Les Miles: Can be bought out for no cash if presented with an exact replica of the Scrooge McDuck vault, only filled with gumballs.

Texas A&M’s Kevin Sumlin: Per Aggies tradition, has an annual bonus determined by the number of miles he can ride overnight on a mule between College Station and Dallas, at a rate of 10 grand per mile. (Mike Sherman got nothing, because he is terrified of mules.)

Florida’s Will Muschamp: Has to pay $4 million if he tries to go back to that ramshackle Russian circus where Florida found him, even though his fellow circus bears miss him something fierce.

Ohio State’s Urban Meyer: Buyout requires an annual seven-day reboot of his system and a long trip to the Genius Bar, where the guy chastises the patron for installing the new OS without thinking about whether this particular Urban Meyer model needed it.

Penn State’s James Franklin: All pertinent language in what would have been the buyout section has been crossed out and replaced with what looks like a binding vow from the athletic director to suit up at defensive tackle in 2014.

SMU’s June Jones: Is allowed to sell shrimp by the pound from his truck during the Mustangs’ bye weeks.

Western Michigan’s P.J. Fleck: Can take a sabbatical of up to six weeks every two years to tour with Janet Jackson, but only if she’s doing “Rhythm Nation.” Is allowed a one-time sabbatical of up to eight weeks during the length of his contract to perform the motion-capture choreography for Paramount’s forthcoming MC Skat Kat reboot.

FAU’s Charlie Partridge: In the event of firing, must be replaced by another coach named after a bird. (Dan McCarney would qualify here.) (No, Paul Wulff, that’s not even the right taxonomical class. Come on.)

Florida State’s Jimbo Fisher: Not actually an official FSU employee, as it turns out; is actually on loan from Bass Pro Shops.

Texas’s Charlie Strong: Any buyout of Strong’s contract must be approved by the University of Texas Ambassador for Coaches Who Definitely Didn’t Get Fired Can’t Believe You’d Report That That’s Very Disappointing, Mack Brown. (Brown recruited Strong’s buyout as a codicil.)

Baylor’s Art Briles: In a unique Texan custom, has a buyout measured in ranches, portioned out by year and delineated with terms like “over yonder” and “a piece that way.”

Nebraska’s Bo Pelini: ON A MOUNTAIN OF SKULLS
IN A CASTLE OF PAIN
BO PELINI SITS ON A THRONE OF BLOOD
AND DARES YOU TO PICK UP HIS EXTENSION OPTION

Syracuse’s Scott Shafer: Has no buyout, because Scott Shafer has no contract. Scott Shafer was just asked to bring snacks one week. Scott Shafer, thank you for your enthusiasm, but we really just needed Capri Sun.

Georgia Tech’s Paul Johnson: Actually costs Georgia Tech nothing because of his refusal to cash checks, or as he calls them, “rich-man promise tickets.”

Washington State’s Mike Leach: Balance of contract can be purchased for low, low price of the bones of George Armstrong Custer. (All of them. Leach is going to dress them up and make them lecture his pirate skeleton about how Gatling guns are for lazy shots.)

Virginia Tech’s Frank Beamer: Has a no-questions-asked clause that will allow him to leave Virginia Tech at any time to operate the train at Dollywood, a position he first enjoyed in the 1980s while ghostwriting some of Dolly Parton’s most poignant love songs. (“Hard Candy Christmas” is actually about the ’94 Gator Bowl.)

South Carolina’s Steve Spurrier: Can be bought out of his contract for a $3 million donation to his charity, the I Don’t Care for Georgia Foundation.