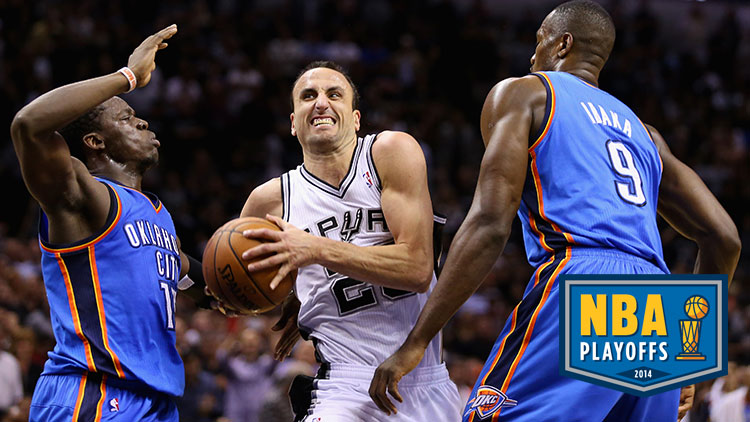 netw3rk: Gregg Popovich goes with the Bonner-Diaw countergambit first seen in Paris, 1927. Result: Chess takes a 3-2 series lead over PlayStation. When the Spurs’ starting lineup was announced, I was struck with an incredible desire to write something like, “And the answer was Matt Bonner.” Mostly because that is a sentence I am fairly certain had never before been written.

But, really, most of the answer was Boris Diaw. The playoffs are about adjustments. That is a sentence that has been written before because it’s just unavoidably true. What’s interesting about the adjustments in the Spurs-Thunder series is how obviously effective they’ve been. The most important change for the Thunder, Ibaka’s “I CAN WALK”–style recovery from what was supposed to be a postseason-ending injury, is less an adjustment than a return to the status quo. But pulling Thabo Sefolosha, starting Reggie Jackson, and increasing the role of Steven Adams were all important to the Thunder running the Spurs out of Oklahoma City on a high-speed rail. Ibaka covers an incredible amount of space on the defensive end while providing midrange scoring punch. Jackson can handle and shoot and has to be guarded. Adams once shook off a Z-Bo throat punch. And suddenly the Spurs’ intricate motion was overpowered by the Thunder’s galloping athleticism.

But during the fading minutes of Popovich’s Dunkirk-like retreat from the flaming wreck of Game 4, he found something, as it turns out, in Boris Diaw and Matt Bonner. Simple idea, really: Break up the Tim Duncan–Tiago Splitter combo, and relieve the pressure on the paint by adding a stretch big to drag Ibaka away from his inner-court fortress.

So, Bonner starts, Diaw takes over soon thereafter and plays the bulk of the minutes. That tweak plus extra wing shooters to grease the pick-and-roll gave the Spurs what they need more than anything else: space. The machine hums to life, the Parker-Manu-Kawhi-Timmy-Diaw lineup posts a 133.9 offensive rating in 12 minutes, and it’s Scott Brooks’s turn to survey the board.

We Believe This to Be an Isolated Incident

Boris Diaw talking to the press about the salmonella outbreak at the restaurant he manages pic.twitter.com/516EKRfWS3

This Is a Joke About Things Being Upside Down in Oceania 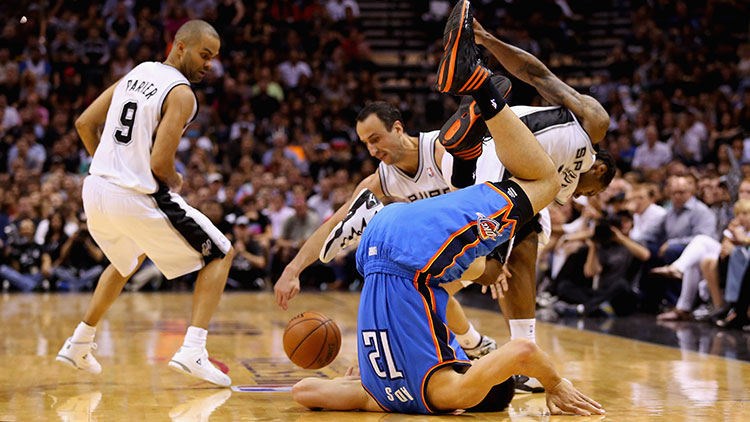 Danny Chau: Steven Adams with the assist. Thanks!

Chau: We saw just how quickly a virus could spread last night.

The first quarter was the kind of exultant brand of basketball that dreams are made of. It was a high-scoring affair with both teams shooting better than 55 percent from the field, netting 32 points apiece after the first 12 minutes. With less than three minutes left in the quarter, Russell Westbrook burned Kawhi Leonard on a drive and exploded, cocking his arm so far back on a tomahawk dunk it looked like his back might snap in two trying to keep up with the rest of his body. Tiago Splitter frantically rotated over, but a Pavlovian response kicked in, and he tucked his arms into his chest, averting a supernatural phenomenon he was conditioned to fear.

The game was tied by the end of the quarter, but it felt like the Thunder had set the parameters of the course. Little did we know at the time that the Thunder were being ravaged from the inside out. The initial effects of the Spurs’ infection didn’t show until midway through the second quarter. Matt Bonner’s surprise start was the innocuous-looking gift horse that appeared to be something of a panic play from the Spurs, an overadjustment meant to lure Serge Ibaka away from his post. But Bonner was just a vessel that set off a number of chain reactions.

The Spurs cut off the Thunder’s familiar pathways to success. In Games 3 and 4, the Thunder combined for 18 blocks; last night, they had four. The Thunder had four fast-break points in the first quarter; those were the only fast-break points they’d score the entire game. It appeared as though the team had legitimate help on the offensive end with wunderkind Reggie Jackson, who was perfect in the first quarter, scoring 11 points in about as many minutes; he wouldn’t score another point in the final three quarters. With precision, the Spurs sapped all the life out of the Thunder, neutralizing their speed and length with those trademark extra passes.

It was a night that begged for Kevin Durant to summon the Hand of God and rally his team back, but the moment never came. It’s hard to complain too much about Durant’s last two games, which have been incredibly efficient, but it’s going to take a rarer excellence from him if the Thunder hope to extend the series. We’ve seen Westbrook at his best in this series. Here’s to hoping it’s not too late for Durant to follow suit.