The Cobbs vs. the Lajoies 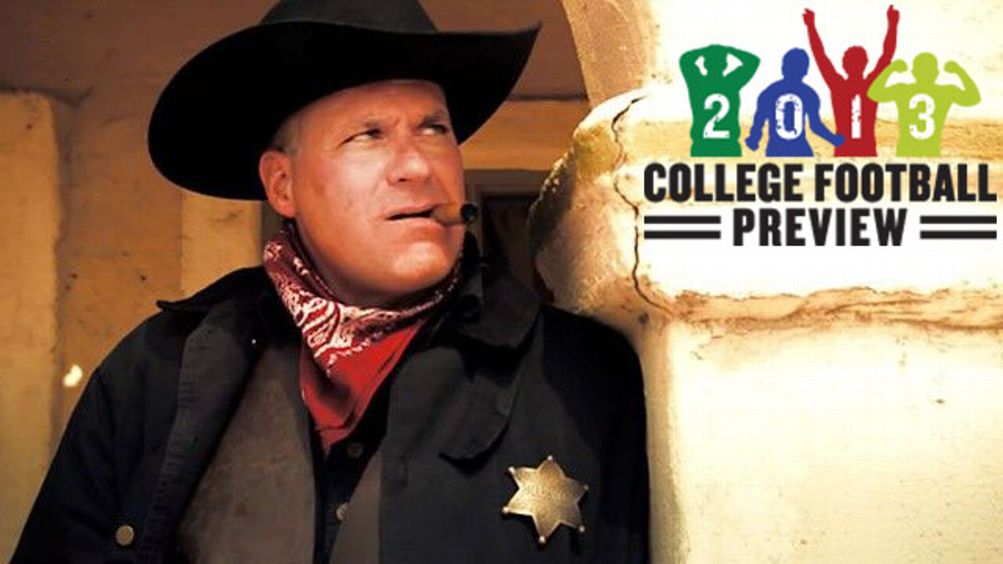 It’s been five and a half years since the guy up there with the cigar bade farewell to West Virginia, his alma mater and the first program to hand him a big head coaching gig. It’s been two and a half years since his ousting at Michigan, following three seasons of unmet W-L expectations, the program’s first run-in with the NCAA, and general all-around un–Michigan Man–ness. The Mountaineers have since found themselves another offensive madman to run the show in the form of Dana Holgorsen. The unassailably Michigan Mannish Brady Hoke holds sway in Ann Arbor. Meanwhile, their shared predecessor has resurfaced in a desert metropolis across the country, where the Arizona Wildcats haven’t had a salient identity in over 20 years on either side of the ball.

You, the casual sports consumer, are likely to be unfamiliar with Arizona football. So was Rich Rodriguez when he hopped a plane to Tucson in November 2011 with AD Greg Byrne. The program is the least readily identifiable of the Copper State’s football teams, and is currently best known for (a) producing Lance Briggs, Tedy Bruschi, and Rob Gronkowski, and (b) being the only remaining member of the old Pac-10 not to make the Rose Bowl. And after an 8-5 debut season that concluded with a rollicking win in the New Mexico Bowl,1 Rodriguez is still savoring his desert honeymoon and a rapport with the university’s power structure that’s a bit more cordial than he perhaps enjoyed at his last stop.

“But here, it’s been like that from day one. And everybody’s rooting for you. Everybody that works for you, everybody that’s around your program wants you to have success.”

Rodriguez was set up for some measure of immediate success prior to his arrival, with quarterback Matt Scott and tailback Ka’Deem Carey already on the roster. He reunited with Jeff Casteel, his DC for most of his tenure at West Virginia, and imported several other assistants from his previous staffs. Reassembled in the Pac-12 South, the Rodriguez posse rode the arm of Scott, hands of receiver Austin Hill, and feet of Carey to a postseason berth in their first year. The Wildcats beat Oklahoma State, took Stanford to overtime, got themselves obliterated by Oregon and UCLA and, again, turned the New Mexico Bowl into appointment television. Win or lose, it was never uninteresting: Arizona averaged close to 40 points a game — and gave up an average of almost 500 yards every week.

“We knew we were going to have challenges defensively,” said Rodriguez. “There were times we were just literally holding our breath; we were starting four or five walk-ons and a lot of young guys were playing before they were truly ready.”

That experience in breath-holding will serve Arizona’s coaches well in 2013. They’ve lost Scott to the NFL and Hill until at least the latter part of this season with an ACL tear. The Wildcats have been so besieged by injuries that they had difficulty conducting a proper spring game. Asked where his biggest roster concerns lie heading into fall camp, Rodriguez speaks in italics: “Everywhere.”

Stay with us here: This is still a team you’ll want to watch. Rodriguez squads, operating correctly, play a strain of football that’s easily transmittable to the casual fan. It is fast. It is cagey. It can be dizzyingly beautiful. And its teams, while good for at least two 40-point shellackings per season, can also be counted upon to upset at least two other teams they have no business competing with, and to scare the shit out of a third. Don’t touch that dial.

Beginning in 2013, Tucson-based intrigue can only ratchet up, as slot after slot on the roster is filled with unfamiliar presences. “Counting walk-ons, we’ve got 42 new players joining the team, and typically as freshmen you think they’ll have a couple years to develop. Well, we’re projecting maybe 14 or 15 of them or more are gonna have to play, or at least be in the two-deep.”

Rodriguez can’t buy time for his freshly hatched players, but the Wildcats have a September schedule that consists of a visit from Northern Arizona, a trip to UNLV, a home game with UTSA, and an open date before they see their first conference opponent. That’s an enviable early-season lab in which to incubate new talents.

“We got a lot of questions, but who doesn’t? Know what I mean? Everybody’s got questions.”

Everybody does. All of Arizona’s, though, begin with “Who” and often end with “the hell is that?”

You will watch this Arizona football promotional video. We will wait.

We will now power-rank Arizona football staff members based on how much it appears they wanted to be a part of this.

1. Charlie Ragle (Tight Ends/Special Teams) DID A SOMERSAULT DOWN A SET OF STAIRS. The loose cannon of RichRod’s imaginary desert football posse, obviously, with a rakish charm that lands him in the kind of trouble he can always smile or shoot his way out of.

2. Rod Smith (Co-OC/Quarterbacks) This is mostly an award for his costume, but what Rod Smith is wearing is better than anything else in this video except for Charlie Ragle doing a dive roll out of a saloon.2

3. Rich Rodriguez Is called upon to do most of the acting, and has to act around an unlit cigar in his mouth. As a lawman, he seems like a bit of a brooder, truly understood by no one but his woman, executive producer Rita Rodriguez.3

4. Matt Caponi (Safeties) More than anyone else in this company, seems to be actively trying to Act, and isn’t higher only because he doesn’t get the screen time afforded to RichRod.

5. Tony Dews (Receivers) Cared enough to stand in dramatic lighting for his close-up; is making what is maybe just a Coach Face but it works here.

6. Jeff Casteel (DC/Linebackers) There’s a real sense of melancholy, a deep pathos here. This is the face of a man charged with fielding a defense that has to take rapid turns with Ka’Deem Carey.

7. Jahmile Addae (Operations Coordinator) The quiet one of the Desert Rose gang, maybe with a young family back home. Plays the violin at night when everybody’s bedding down around the campfire, probably.

8. Matt Dudek (Recruiting/Player Personnel) Going for tough but hitting on “perturbed.” Gets worlds of extra credit for being the guy who came up with this entire plan in the first place, and for sliding face-first down the bar.

9. David Lockwood (Cornerbacks) Posing with intent and malice, fine qualities in any defensive back.

10. Jim Michalczik (Offensive Line) Is going along with this and is trying to gaze soulfully into the distance, but is not as good at it as Caponi.

11. Bill Kirelawich (Defensive Line) Seems to be not entirely sure of where he is. Would maybe be the town doctor. Laudanum!

3. Get in the Rodriguezone: Miscellany

• It’s not called the Rodriguezone, for reasons surpassing our understanding, but please refamiliarize yourselves with the accident that begat the RichRod offense.

• On the spread of the spread. “You know, I’m a little surprised it took this long. Course, it was 20 years ago when we were doing it at Division II Glenville State. No games were on TV and nobody knew about it. Then all of a sudden you start doing it at a Division I school and it spreads.”

• RichRodisms, cont’d. “Well, I hear a lot of times people say ‘Oh, we gotta have a guy that’s a game manager,’ and I don’t know what that is.”

•  Because we cannot write about football without writing about Alabama, here’s what the guy they almost hired instead of Nick Saban has to say about their quarterback. “Talk about Alabama and they’ve had great defense, but AJ McCarron has been terrific, I mean absolutely terrific. No question. He’s one of the best in the country, and he has been. And I think the pieces around him are so good that sometimes you overlook him a little bit.”

•  RichRodisms, cont’d. Every coach has his favorite chestnut. Rodriguez has been using this metaphor to describe his ideal quarterback since at least 2007: “Well, the one thing we want, and it’s coachspeak, but we want a guy who’s a point guard that can shoot the 3. In other words, sometimes he’s gotta distribute and sometimes he’s gotta take it himself depending on how they play us, and some guys have been better shooters and some have been better passers, so to speak.”

•  This isn’t the first time we’ve goggled at Arizona’s staff videos this offseason.

• Is the up-tempo offense ruining football? “I think that’s ridiculous. I mean, they never talked about injuries when Buffalo and the K-Gun offense were going to all those Super Bowls. You just play more players. We go fast, so it can sound self-serving, but I don’t think anybody goes to a game to watch a huddle … Have less breaks, less TV timeouts, I know we gotta pay the bills, but I’d like for us to play faster.”

Arizona and Arizona State first competed for this relic in 1899. The Cup is “moved from one school to the other only under escort and the supervision of gloved archivists.” It also just sort of looks haunted, but not in a menacing way. More in a “if Nicolas Cage knew about it, he would purchase the movie rights to it” kind of way.

• Required viewing: Arizona vs. USC, Thursday, October 10. Last year the Wildcats edged out the Trojans by three in a jaw-dropping aerial duel between Scott, Hill, Matt Barkley, and Marqise Lee.4 It’s unfair to expect the same level of showmanship with three of those pieces gone pro or sidelined, but it’s a weeknight prime-time game, and a little summer reverie never hurt anybody.