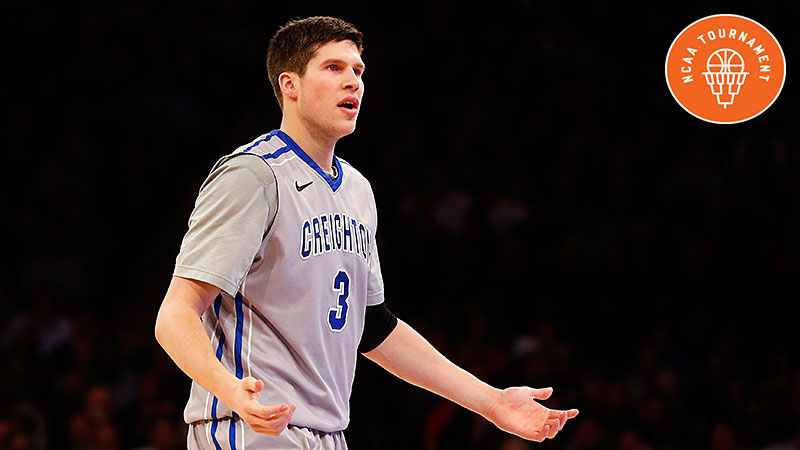 Before we get to today’s predictions, let’s take a look back on how some of yesterday’s turned out, just so you all are reminded of the Nostradamus you’re dealing with here.

“The most annoying commercial of the tournament will reveal itself before halftime of the first game — and it won’t be a NAPA commercial.” Only once did I see the Dish Network commercial that was shoved down my throat during the play-in games.

“Syracuse vs. Western Michigan will be the best game of the day.” There were four overtime games, and Dayton–Ohio State and Texas–Arizona State came down to the final shot. Meanwhile, Syracuse beat Western Michigan 77-53.

OK, on to today’s predictions.

Everybody knows about Doug McBuckets, the nation’s leading scorer at 26.9 points per game, who currently sits at fifth all time in Division I career scoring. But unless you follow the sport closely, you probably don’t know that Louisiana-Lafayette has its own great scorers in Elfrid Payton and Shawn Long, who average 19.1 and 18.7 points, respectively. Given how great McDermott has been in his last four games (34.8 ppg) and the Ragin’ Cajuns 300th-ranked scoring defense (of 351 Division I teams), it’s all but guaranteed McDermott will score at least 30 Friday. But that alone wouldn’t be much of a prediction — like guessing that a relationship from The Bachelor won’t last longer than a year.

Well, I’m taking it one step further. I’m predicting that one of Lafayette’s studs will go toe-to-toe with McDermott. Payton has scored more than 30 points four times, and Long has eclipsed 25 four times this year. Plus, for reasons I can’t explain, Payton and Long almost never have big games on the same night. In fact, only twice since January 1 have both guys scored 20-plus in the same game, and one of those games went to double overtime. If this pattern continues and McDermott brings his A-game — as he always does — then we’re looking at a shootout between two gunners who end up combining for 60.

If my first prediction comes true, that would pretty much guarantee this one, too. That feels cheap to me, so let’s say America will learn someone’s name other than Elfrid Payton’s or Shawn Long’s. Some player from a school that hasn’t been on national TV much will have a huge game and/or hit a buzzer-beater, and he’ll be talked about so much that your grandma will know who he is. Last year, the out-of-nowhere star was unfortunately — and tragically — Kevin Ware, for reasons that had nothing to do with a breakout performance. But there were still guys like Brett Comer (FGCU), Cleanthony Early (Wichita State), and Damyean Dotson (Oregon) who introduced themselves to the world via the NCAA tournament. This year, and today specifically, I have a feeling your grandma will learn one of the following names: Chaz Williams (UMass), Jeremy Ingram (North Carolina Central), Terran Petteway (Nebraska), Cameron Bairstow (New Mexico), or James Woodard (Tulsa).

Providence vs. North Carolina will be the game of the day

In the last month, Providence has won six of seven, claimed the first Big East 2.0 tourney championship, and suffered its only loss against Creighton on Doug McDermott’s senior night, which was a game the college basketball gods would never let anyone but the Bluejays win. Meanwhile, since giving Wake Forest the business on February 22, North Carolina barely escaped North Carolina State in Raleigh and then put forth four straight dud efforts leading into the tournament. Marcus Paige vs. Bryce Cotton, who is a starter for the Hero Ball All-Stars, is enough on its own to make this a must-see game. When you throw in a hot Providence team going up against a North Carolina team that I’ve written would be much better if it lost a couple heading into the tournament (as it has), this smells like a classic.

Carolina fans, you needn’t panic over your team’s recent slump. Here are two reasons to be optimistic even if the Heels lose: (1) Based on my “Carolina needs to lose to get its edge back” theory, a three-game losing streak would inspire the Heels to tear through the losers’ bracket and make a run at the national title. And (2) P.J. Hairston should be reinstated any day now.

Stanford, Gonzaga, or Kansas State will spoil one of the highly anticipated matchups

When the bracket was announced last Sunday, three potential second-round matchups caught my eye. (Reminder: No matter what the NCAA says, the first weekend will always be the first and second round, and the “First Four” games are the play-in games.) The first of these matchups was New Mexico vs. Kansas. The Lobos have the best big-man tandem in college basketball with Cameron Bairstow and Alex Kirk. They play great defense, and Kansas figures to be without superstar center Joel Embiid. Plus, the Jayhawks have struggled with turnovers this season. All signs point to an upset, or at least a great game.

The second matchup was Arizona vs. Oklahoma State. The Cowboys went through a brutal February, wherein a brutal Big 12 schedule, Marcus Smart’s suspension, and Travis Ford’s being their coach caused their stock to plummet. Since Smart returned, the Cowboys have gone 5-2, with both losses coming in overtime to great teams. But because of that seven-game losing streak last month, OSU was given a 9-seed, even though its roster has the talent of a 2- or 3-seed.

Finally, with Kentucky showing glimpses in the SEC tournament of the Wildcat powerhouse we thought we’d see all season, a potential Kentucky–Wichita State game figures to be a bloodbath. I’m beside myself in anticipation for these potential Sunday games … which is why they’ll probably all get spoiled by Stanford, Gonzaga, and Kansas State.

Brandon Ashley will be established as this year’s Kevin Ware

Let’s make one thing clear: There will never be another Kevin Ware, just like there will never be another Sonya Curry or another Peyton Siva’s dad. The odds of a guy suffered a horrifying compound fracture during an NCAA tournament game with all of America watching, and then his team rallying around him to win a national championship, are slim to none. The odds of it happening twice are “Cubs, Browns, and Clippers win titles in the same year” impossible. So when I say Ashley will be this year’s Kevin Ware, I mean he’ll be the guy who gets a ton of screen time despite not playing.

Ashley was the second-leading scorer for Arizona before he tore a ligament in his right foot on February 1, forcing him to sit out the rest of the season. Now that the Wildcats are a top seed in the NCAA tournament, I expect CBS to be all over Ashley’s injury, as if it happened two days ago. I’m not going to get crazy and say CBS will devote a camera to Ashley at all times, as the network did with Ware, but starting today we’re going to see a ton of Brandon Ashley in street clothes.