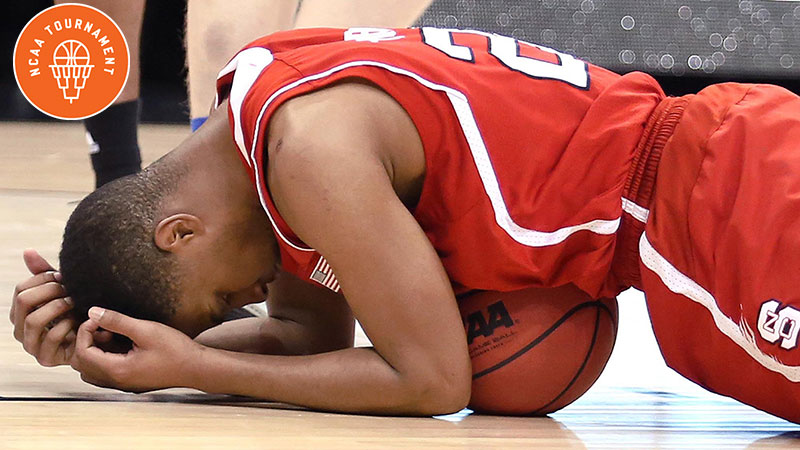 NC State Shit (n.) — “An inevitable chain of events in a sports where a blatant bad call or bizarre unlucky play causes in a total collapse of confidence, resulting in multiple, unforced, and devastating errors.”

The cliché police should lock me up and throw away the key for starting this post with a dictionary definition, but honestly, it’s too perfect. I’m not a State fan, so I don’t quite understand the pain the Wolfpack Nation is feeling this morning, but I live in North Carolina and have been around long enough to pick up a few pertinent facts about the dynamics of the Raleigh-Durham–Chapel Hill triangle. Here, briefly, are the basics:

• Duke: The Pricks. The school represents the arrogant outsider, the Northern aggressor with poor manners and a brashness unsuited to the culture.

• UNC: The Hypocrites. The Tar Heel expertly plays the Southern gentility card to contrast itself with Duke (“the Carolina way”), but can switch gears on a dime to look down its nose at State.

• N.C. State: The Plagued. This is the agriculture school, salt of the earth, with fans who dislike losing to Duke but can’t stomach losing to UNC. They routinely, devastatingly, lose to both.

Duke and UNC constantly war for the highest status (in North Carolina, status comes first and foremost by way of basketball), and each has seen success on the national stage within the last decade. State isn’t bereft of victory, but over the past 25 years, the phenomenon of “N.C. State Shit” has been the recurring theme for one of the longest-suffering fan bases in college sports. It’s not just the struggle that hurts; it’s the struggle in the face of the school’s juggernaut neighbors. It’s the heartbreak in contrast to the surrounding triumph.

So, last night. Eight minutes, 13 seconds remain. State, a 12-seed, leads by 16 points, 55-39, over the 5-seed Saint Louis. It was probably the best defensive game Mark Gottfried’s Wolfpack played all season, which was remarkable because Mark Gottfried is not known as a defensive coach. In fact, his teams usually stink on that side of the ball. His offense is potent, though, and a 16-point lead seemed very safe. It was time for State fans to start dreaming about a potential upset of Louisville.

What happened over the final eight minutes is still difficult to believe. To start with, the foul shooting: 9-21 over the rest of regulation. The Wolfpack shot 65.7 percent on the season and had been 7-10 to that point in the game. Even one more make might have been enough to win the game.

Then there was Tyler Lewis’s jumper at the buzzer:

It could have rattled home instead of popping in and back out. Or maybe Gottfried could have kept ACC Player of the Year T.J. Warren momentarily on the bench when State needed to hack in overtime, thus saving him from committing his fifth and final foul. Or the defense could have avoided a total meltdown, allowing Saint Louis to go 12-19 at the end of regulation, and 4-6 in overtime (compared with 15-39 the rest of the game).

Or war could be a myth, and fire could be healing, and we could all have been born holding the silver spoon. It’s discouraging to believe that fate is real. But today in Raleigh, there are true believers walking the streets. You can almost hear their thoughts: “In this town, no lead is safe.”