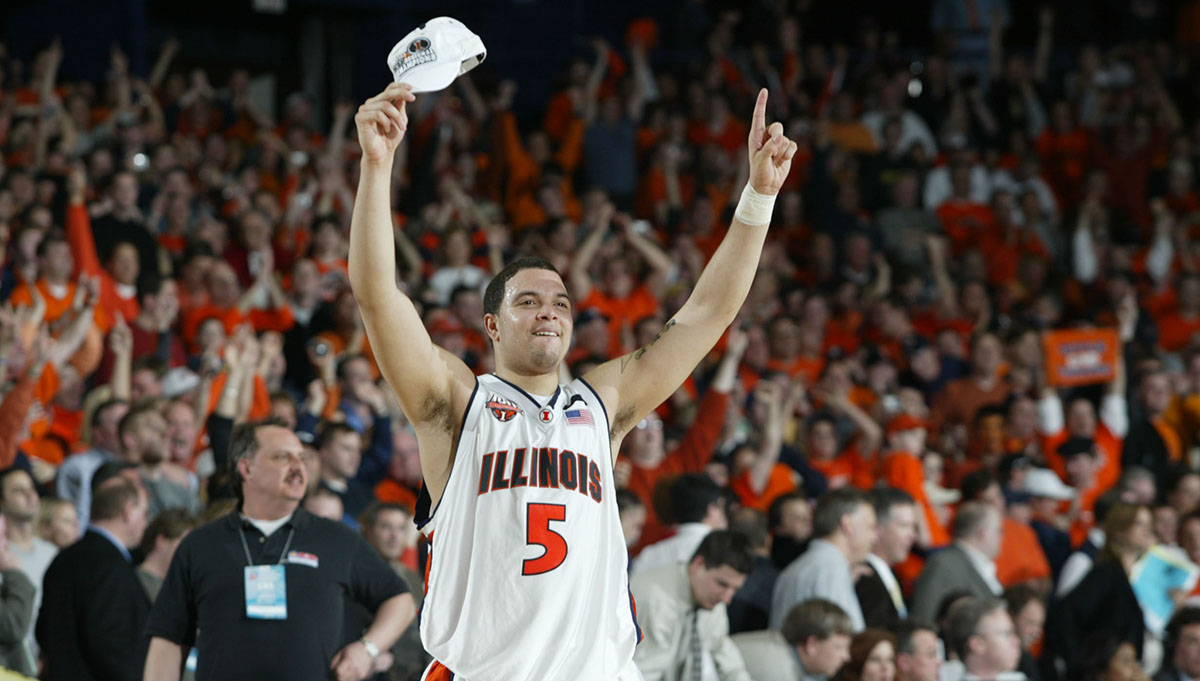 When the lead hit 14, Josh Pastner snuck a peek down the sideline. Two hours earlier, before Arizona’s 2005 Elite Eight game with Illinois had even tipped off, Allstate Arena was shaking. The venue is 150 miles from the Illini’s campus in Champaign, and the crowd had traveled well. “It was a 22,000-seat arena,1 and I’m telling you, 21,900 in orange were screaming their heads off for the Fighting Illini,” says Pastner, the Memphis head coach who was a Wildcats assistant then.

All the Grantland coverage of the 2015 NCAA tournament, right here.
As the game wore down and Illinois’s dream season seemed over, the entire building went dead silent. “You could have heard a pin drop, because I think the fans were shocked, stunned,” Pastner says. “You look down the sideline — you could see Coach [Bruce] Weber, who I love dearly — but it looked like they’d just seen a ghost. You’re down 14 with under four minutes to go. It was gonna be hard to beat us or any team. And obviously, the unexpected happened.”

It’s no wonder Illinois was stunned. When Mustafa Shakur drilled a 3-pointer with just over seven minutes left to push the Arizona lead to 67-58, it matched the largest deficit the Illini had faced the entire season. “We had no answers,” Weber says. “All year we had been able to flick a switch and just control games.” Illinois’s margin of victory that year was nearly 16 points per game. In its 30 regular-season games — in which it went 29-1 — only five were decided by single digits. Weber knew early on that this group was different. In December, deep in the second half of a game against Chris Paul and then–no. 1 Wake Forest in Champaign, longtime referee Steve Welmer started barking at the coach on the sideline. “He’s yelling, ‘Weber! Weber!’ I turn around, and he says, ‘Look at the scoreboard,’” Weber says. “We were up 37. And he goes, ‘Would you please just sit down and enjoy this?’”

Even in their daze, Illinois didn’t panic. “I can still remember Deron [Williams] saying in one of the huddles, ‘We’re fine, the game’s still in reach. Let’s just keep making plays,’” Weber says.

When Weber arrived at Illinois before the 2003-04 season, Williams was the first player to fall in line. “Deron was the easiest,” Weber says. “Literally one day.” It came more slowly for others. The Illini had finished the previous season 25-7; they’d been a top-15 team nearly the entire year. It was enough to earn head coach Bill Self the gig at Kansas. “Coach Self had recruited them, they felt really good about their team, and all of a sudden, he’s gone,” Weber says. “We had to go through some of that, the hurt feelings.”

The defining moment of Weber’s tenure came in its first few days. Williams, Dee Brown, and Luther Head came into his office with a plea: The three guards wanted to start, together. Coming from the Missouri Valley, three-guard lineups were the norm for Weber. He didn’t see why this couldn’t work. Illinois’s offense quickly revolved around its trio of guards’ ability to shoot and move without the ball. Weber says it was in late January 2004 when his new group finally settled in. It was embarrassed at Kohl Center in Madison, losing by 20 to Wisconsin. Devin Harris and the rest of the Badgers chirped the entire game. It would be Illinois’s last loss before 25 straight Big 10 wins; nearly a year to the day after losing to Wisconsin, Illinois returned to Kohl and snapped the Badgers’ 38-game home winning streak.

Head paced Illinois with 18 points in that win over Wisconsin. When Weber got to Champaign, Williams and Brown were already stars, having spent the summer playing with USA Basketball. He remembers Head’s resentment about being left behind. “I told him, ‘This is your chance to take advantage of being here, to catch up to them skillwise,’” Weber recalls. “They all had their shining moments, but there were times that he was better than both of those guys. He was kind of that X factor.”

With 3:18 left in the second half in their showdown with the Wildcats, it was Head who drilled a 3 from the left wing to cut Arizona’s lead to 11. 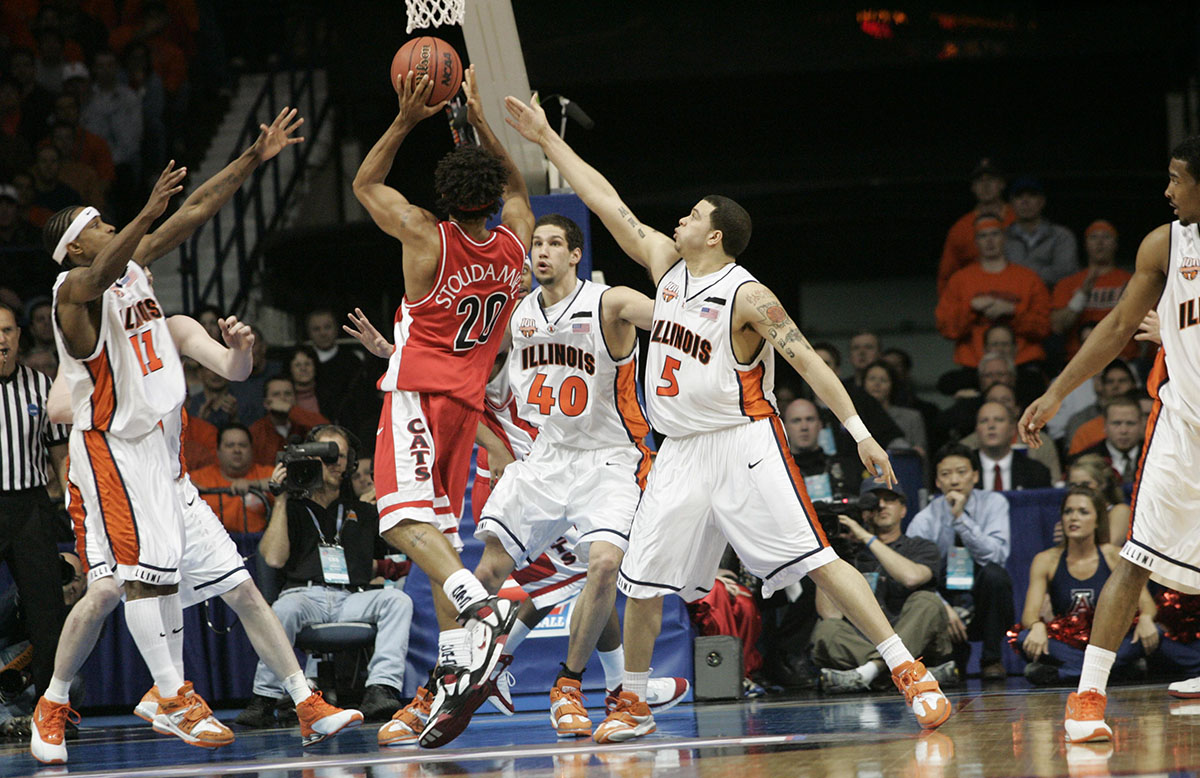 As time has passed, the story of that game — a mind-boggling 15-point comeback — has been distorted. Arizona didn’t jump on a dominant Illinois team having an off night. Illinois was its usual dominant self for most of the first half. When Brown banked in a 3 from the left wing to extend an Illinois lead to 31-25, the Illini were 7-of-13 from behind the arc. The problem wasn’t putting the ball in the basket; it was stopping Arizona from doing the same.

“We had been such a good offensive team all year, and that’s all people talked about,” Weber says. “But when you really study us, we were a great defensive team,2 but we never got the credit because we scored so many points. And all of a sudden, we just couldn’t stop them. They just picked us apart.”

Most of the season, the senior duo of Salim Stoudamire and Channing Frye were the focal point of Arizona’s success. Stoudamire shot 50.4 percent from behind the arc, while averaging more than 18 points per game. “Everyone on the East Coast, everyone in the country, they remember J.J. Redick,” Frye says. “J.J. Redick is the better NBA player, but I will say, overall, the better shooter at that time and maybe of that era was Salim. It’s not even close.” Frye, who has played in the NBA for 10 years, made his career as a 7-footer who shoots nearly 39 percent from 3. “Salim, to this day,” he says, “is arguably one of the top-five best shooters I’ve ever seen.”

In the Sweet 16 against Oklahoma State, it was Stoudamire who buried a jumper with 2.8 seconds left to give Arizona the win. But against Illinois, that player was nowhere to be found. The task of guarding Stoudamire fell to Williams, who stalked him around the court the entire night. Stoudamire finished 2-of-13, going without a field goal in the first half. So Frye took charge. “He did everything in that game,” Weber says. 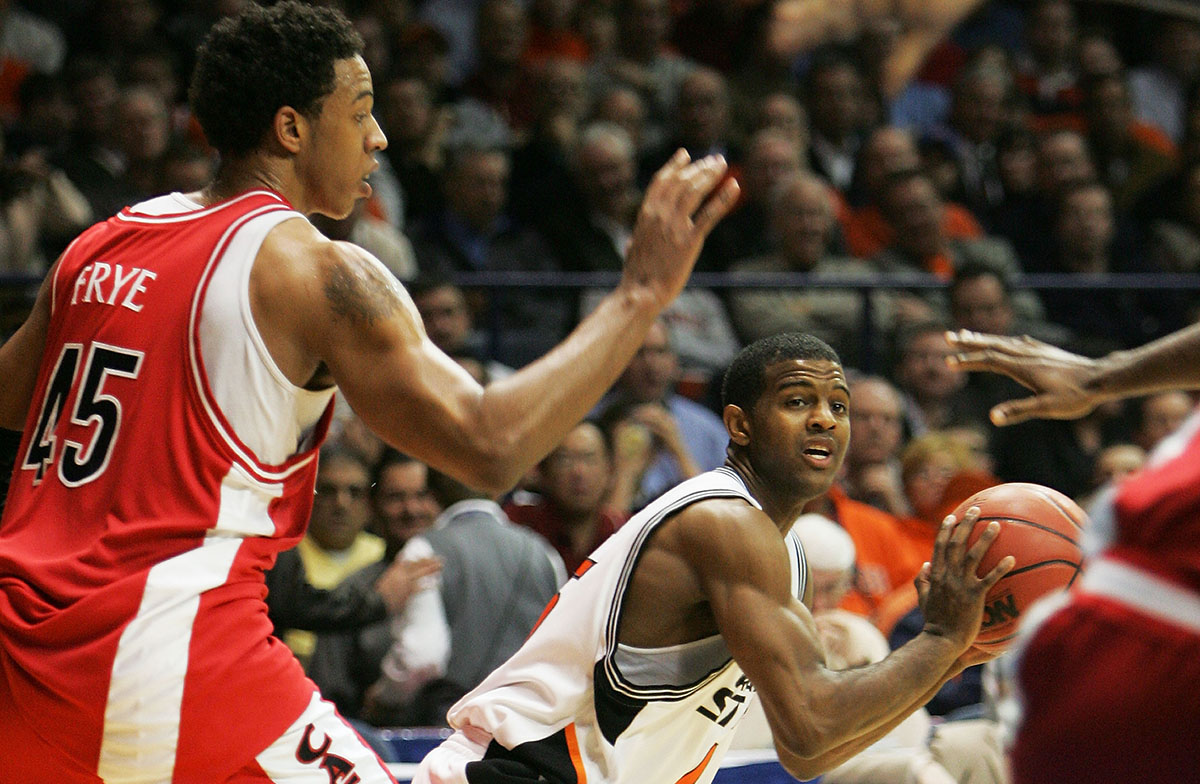 Frye scored from all over in the second half: midrange jumpers, shots in the post, putbacks. He finished with 24 points and 12 rebounds on just 14 shots. “For me, I always say, ‘That’s the game that made me a lottery pick,’” Frye says. “I’ve told Deron Williams, ‘Thank you.’ We still joke around about it.” Frye carried most of the load for Arizona, but when the Wildcats’ run in the second half came, Hassan Adams played Robin to Frye’s Batman. Illinois struggled to keep Adams, with his combination of quickness and power, from getting into the lane. The result was a series of passes to cutting teammates, layups at the rim, or trips to the line. In the five-minute stretch when Arizona raised its lead from three to 14, nearly every basket involved Adams.

“It was surreal,” Pastner says. “I remember turning to our assistant with about 3:30 to go and saying, ‘We’re going back to the Final Four.’

Nearly everyone involved has their own small moment from those four minutes that tilted the game. For Pastner, it was Brown picking Shakur’s pocket at half court, racing down the floor, and laying the ball in to cut Arizona’s lead to three with 45 seconds left. For Frye, it was the next possession, when Jack Ingram tipped away his inbounds pass and Williams knocked down a 3 over Frye’s outstretched arm to tie the game. Even today, Frye seems to be bargaining with himself as he remembers it all.

“They got really hot, and we made some mistakes, things that could have been done differently,” he says. “I think at the end of the day, each person has to think, What could I have done differently? And other than having longer arms, maybe, to catch that inbounds pass, there’s really nothing.”

Weber can still remember the exhaustion on his players’ faces. Williams was cramping, a product of chasing Stoudamire around. Head was nursing a hamstring injury from earlier in the tournament. “I don’t know if there ever was a [turning] point,” Weber says. “Overtime, you feel like, Man, we have the momentum.”

“We were just so exhausted down the stretch,” Weber says. “I don’t think we could get where we could put them away. Until that last shot bounced off the backboard, I don’t think I ever felt like we had it for sure.”

It’s a blur for Augustine, his memory distorted by the thunder inside the arena. “It’s really hard to explain the feeling during that stretch,” he says. “When you’re in Assembly Hall,3 the place explodes and everything’s shaking. It’s so loud and you can’t think. This whole emotion was completely different. We were coming back, people were screaming. There was so much emotion that it was almost like an out-of-body experience.”

Those emotions came later for Arizona, Pastner says — not on the plane ride home, but in the next week or two. “We were just in zombie mode,” he says. “You have a black cloud over you. I believe we would have won it all.”

By now, we know that Illinois didn’t. Nine days later, it would fall to North Carolina in the national championship game the entire country had wanted all season. But the memory of that comeback endures. Weber had driven his own car from Champaign that day. There were some early media obligations, and he didn’t want the team waiting around. As he left the arena after the win, Weber was starving. But before he could eat, calls started coming in from people — players, trainers, coaches — on the team bus. “They were saying, ‘Coach, you’ve gotta catch up. We’re on [Route] 57, and there’s people lined up at every interchange on the overpasses,’” Weber says. “I joked with them, ‘Tell the police I’m coming, because I’m going to be going fast.’”

He caught up to them just north of Champaign. When they got to the practice facility, a crowd of thousands was waiting. “The bus couldn’t even get through,” Weber says. “We eventually just had to let everyone off.” The throng stayed deep into the night, until two or three in the morning.

“It’s one of those special moments you live with for the rest of your life,” Weber says. “Now it’s 10 years, which is hard to believe.” A decade later, Weber can’t even remember if he ever got to eat.