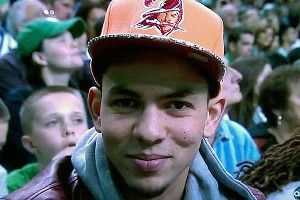 1. Austin Rivers, Snapbacks Back
David Cho, arguably the second-best-dressed man in the Grantland office, chimes in with this fashion trend watch: “In case you haven’t been keeping tabs on the sartorial decisions of Jay-Z, LeBron James, and a handful of other rich friends of Kanye West, there’s been a headwear trend that’s slowly spent the last year going from being ‘sort of a thing’ to ‘definitely a thing’: snapback hats with customized snakeskin bills. Yep, that’s right; this is a thing! In fact, it’s a $400 thing (each hat retails for $400)! The most recent example of its “definitely a thing”-ness came during this past Sunday’s ABC telecast of the Heat and Celtics when Austin Rivers was being interviewed in the stands while wearing a throwback Tampa Bay Buccaneers version of the snapback. These hats are handmade by Don C, Kanye West’s manager and best friend, for his ‘luxury boutique’ (their words, not mine) RSVP Gallery in Chicago. Swing by if you’ve always wanted to own a piece of clothing that really shows people that you definitely know how to waste money.”

2. Roger Johnson, Fear and Loathing in Wolverhampton
Bill Barnwell would never embarrass his keeper like this: “It’s been a fun year for Wolverhampton Wanderers center back Roger Johnson. Signed away from relegated Birmingham City over the summer for a reported fee of about $11 million, Wolves instantly installed him as their captain and set off on another season in the Premiership. Since then, Johnson’s been benched twice and Wolves are in last place in the EPL, and that’s the least of Johnson’s problems. After new manager Terry Connor left Johnson on the bench for his first two matches at the helm, Johnson showed up for a Monday-morning practice drunk. Right. Not hungover. Still drunk. He sat out the next two matches, only for his wife to go on Twitter and complain about her husband sitting on the bench.

That got Johnson inserted back into the lineup for a 2-1 loss that went without incident, but in his second game back in the lineup, Johnson got into an onfield argument with his own goalkeeper, going nose-to-nose with the popular Wayne Hennessey before another teammate and the referee stepped in to break up the argument. Wolves fans, as you might suspect, responded by chanting ‘Hennessey, Hennessey’ at the arguing players. Unless Havoc suddenly started warming up on the sidelines, we can safely say that they were exhibiting their dislike for the team captain.”

3. Raymond Felton, Chalupa Withholder
Let’s just run down Raymond Felton’s last eight or nine months. Gets traded to the Portland Trail Blazers, promptly enters his Fat Betty Draper phase, finishes Sally’s sundae, possibly organizes a mutiny against Nate McMillan, watches as McMillan gets canned, probably searches McMillan’s office for Fritos, has a chance for personal redemption when making two free throws at the end of a throwaway game against the Hornets that would have won all the Blazers fans in attendance free Chalupas. Blows said chance, then is the subject of a Twitter rant by long-time Blazers beat writer Jason Quick on Twitter. Awesome. Eat, Pray, Love, Miss Shots, Make Fans Hungry.

4. Cipha Sounds, Whistleblower
If you’ve ever lived in New York City (or the tri-state area) and spent any time listening to Hot97 then you probably know who Funkmaster Flex is. And if you know who Funkmaster Flex is, you will find this imitation, performed by his one-time intern (and current radio personality, in his own right) Cipha Sounds completely hysterical. Trust me, this is a very, very accurate imitation. This comes to Rankonia via Andy Greenwald. Let me be so clear!

5. Frank Isola vs. MSG, A New York Story
Katie Bakes loves a good old-fashioned New York newspaper donnybrook: “I nominate the feud between Frank Isola of the Daily News and Madison Square Garden. The particulars of the fight don’t really matter because they’re silly (the Linjury is involved) but the fact that it all boils down to accusations of ‘a “campaign of intimidation and extortion” by publisher Mort Zuckerman to bring about a merger between the operations of two local newspapers’ is so wonderfully and exasperatingly New York.”

6. Joe Flacco, Great Quarterback or Greatest Quarterback?
From Sarah Larimer, who misses the Bad Quarterback League: “Here is an actual thing Joe Flacco said. In real life. ‘I assume everybody thinks they’re a top-five quarterback,’ Flacco said when he was asked where he thinks he ranks among NFL quarterbacks. ‘I mean, I think I’m the best. I don’t think I’m top five, I think I’m the best. I don’t think I’d be very successful at my job if I didn’t feel that way. I mean, c’mon? That’s not really too tough of a question.’ My favorite part is how he says all that, then insults the question. C’mon!”

7. Baylor University, Home to Brittney Griner. And Robert Griffin III. And various talented players on the men’s basketball team, who no one remembers right now because of Brittney Griner.
Everyone at that school is a winner. Except Ken Starr, I guess.

8. Darius Miller, Kentucky’s Favorite Son
It is impossible to not like Darius Miller. He could run for governor of Kentucky now and no one could touch him. Except maybe John Calipari, and he might be doomed after people saw this video:

9. The Case of the $3 Taco and the ex-Florida Gator, American Crime Story
From Michael Weinreb: “A man, a tortilla, a heist gone bad.” Let’s just grab some of the best lines from this incredible story about former Florida basketball player Erving Walker, who allegedly took the taco and ran from a Gainesville food vendor: “He ordered a $3 sausage taco and then he was like, ‘Do y’all take cards?’” Perez said … “I don’t follow sports,” Perez said. “He was just some dude that stole who was very fast.” … “However, when Walker realized he was being followed he tripped and fell, dropping the taco …”. What a country.

10. Emilio Estefan, Harbinger of Doom
Emilio Estefan is planning the musical performances at the Miami Marlins’ home opener. He apparently wants to drive the majority of the people in attendance completely out of their minds because he is planning on “a lot of percussion” and crowd participation: “Every fan will be given a box of Tic Tac mints to use as instruments.” A stadium of people PLAYING Tic Tac boxes?