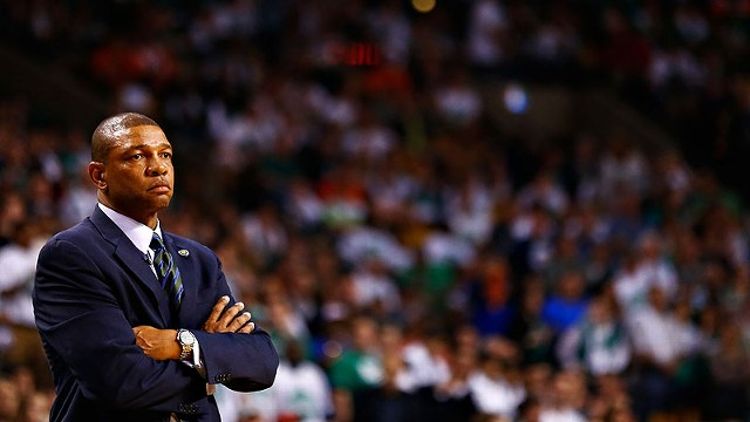 Let the record show that we always made fun of Ubuntu. The gradual disintegration of the Celtics’ Big Three era — which hit another milestone this weekend with Doc Rivers bouncing on Boston to try to make sure the denizens of Lob City play nice — might lead you to believe it’s only in hindsight that the rallying cry of the 2008 champions seems dopey as hell. Trust me: It always seemed dopey as hell.

Let’s travel back in time. The year is 2007, the city is Rome, and Ubuntu has just been born. From ESPN The Magazine’s cover story on the newly minted power trio: “‘Ubuntu!’ the Celtics shout as they break their huddle after practice. Coach Doc Rivers says he chose the chant over the typical ‘1, 2, 3, Celtics!’ after reading about Bishop Desmond Tutu over the summer. ‘Ubuntu,’ from the African Bantu language, stresses collective success over individual achievement. And maybe it’s already having an effect. Boston’s starting five all sported shaved heads in Rome, and Garnett bought each rookie three custom-made suits. The players hung out together nearly every night, cracking on one another for hours one evening on the Spanish Steps.”

Then, on opening night, when the new Big Three romped all over the Wizards, the heretofore unproven ameliorative effects of the work of Archbishop Tutu on basketball psychology appeared to have been confirmed, with much élan. As the team rattled off wins (8-0, 20-2, 29-3), these were, for Celts fans — grounded, after years of Vin Bakerisms, into sunken-eyed indifference — heady times. A manufactured all-star patchwork wasn’t expected to jell this quickly; this was almost an embarrassment of goodwill. But two things helped them avoid the post-Decision vibes that hurt the Heat. One was that KG, Paul, and Ray were just past their primes, which meant their team-up felt noble and selfless rather than craven and calculating. The other was that the big-grinning Doc, the ultimate players’ coach, had been handed his appropriate mound of clay and appeared to be molding it into elite, defense-first, team-basketball perfection. So yeah, sure, why not: Ubuntu, motherfuckers.

And then they won the title in their first year together, and in heart-bursting fashion — going to seven with the Hawks and the Cavs, vanquishing old foes the Pistons in the conference finals, vanquishing older foes the Lakers in a giddy, wide-open, title-clinching Game 6. So things didn’t really get interesting, in both the positive and negative connotations of the word, until 2009.

That year, minutes, it seemed, before tipping off against the Bulls in their Round 1 series, the Celts were still promising that Garnett would return from his right-knee sprain. Instead, he spent seven games at the lip of the bench in a black suit nearly busting a neck vein. Still, Boston and Chicago played the best playoff series I’ve ever seen. As overtimes and buzzer-beaters rained from the sky, it was Ray Allen playing like a fiery hero whose coming was foretold in the washed-away annals of some forgotten civilization.

In 2010, they went seven with the Lakers. In 2012, seven with the Heat. Losing both felt sickeningly identical. I walked away from the TV and have avoided all highlights to this day. But I’d never say I didn’t get my money’s worth. So it wasn’t the title-stringing insta-dynasty we hoped for. It was something woolier.

By the time Kendrick Perkins got traded at the 2011 deadline, the word “ubuntu” already had a way of getting stuck in your throat. Then that steady fount of debilitating Rajon Rondo rumors — Rondo cracked a TV screen with a bottle! Rondo’s only friend is Keyon Dooling! — began. So when it crested with Jesus crumbling hearts and departing for Miami, in large part because he couldn’t stand Rondo, it wasn’t like we still thought everything was all chummy and ubuntu-y. It just kind of smarted to see it all laid out like that. I guess it’s only right that Doc’s exit comes with another ugly Rondo rumor: that things in the locker room at one point got so bad that Rivers and Rajon might have actually, um, thrown hands.

During the 2013 preseason, I profiled Jason Terry and heard all about how this team, minus malcontent Ray Allen, was jelling beautifully. Rondo was happier. The dudes were all broing out. They even went abroad again, playing preseason games in Turkey and Italy. In Europe, Terry recalled, the team would come together “every night. And every night it was everybody — no man left behind.” After dinner, they’d hang out, talking in the lobby for hours and hours … Terry says KG had the best tales, “from battles against old veterans like Charles Oakley to gang shootouts when he was younger.” So — ubuntu lives! Cue just about every Jason Terry possession of the 2013 season, and me cringing through it. The thing is, I’m sure they really did have a great time taking in the sight of Istanbul’s famed Blue Mosque. But when you start losing because you’re old and hurt and your free-agent signees underperform, that’s not worth much.

Doc’s exit is now softening us up for the other, more dire inevitabilities. If the league hadn’t stepped in, KG might have been out the door with him; meanwhile, Paul Pierce can still be bought out, for a sensible $5 million, by June 30. Word is Danny Ainge is trying to get a first-round draft pick for him, which gives fodder to anyone who wants to argue that last postseason was the time to clean house and rack up serious value. But I’ll remind you about it was the young guy who got hurt this year, and that things might have yet been different if he hadn’t.

As for the inventor of Ubuntu (no, not Archbishop Desmond Tutu): no hard feelings. Let’s remember he didn’t just prance in for the title and the good years. This is the guy who paid dues, treading water in the dark days before KG and Ray; this is the guy who had to try to coach Ricky Davis. Rationally, Celts fans know clearing Doc’s salary, and actually getting a draft pick out of it, is the sensible move here. In the wake of Ray’s title-saving Game 6 3-pointer, it’s hard to stomach this all falling apart. But the Big Three era was, for the most part, rocky sailing. Since 2009, it was destined to fracture, not segue peacefully. Ubuntu never really fit all that well here.

But either way, let’s give it a proper farewell: Ubuntu passed away this weekend, at the age of 6, of obsolescence. It was found resting peacefully at its last known address, the back of the extra storage closet at the Celts’ practice facility. It is survived by Doc Rivers, the 2008 NBA title, that time Paul Pierce pretended to be a Roman gladiator, the Casual Male XL in Natick where Brian Scalabrine used to buy his suits, and Archbishop Desmond Tutu.

Rafael Nadal Falls at Wimbledon to a Guy Named Steve