Rafael Nadal Falls at Wimbledon to a Guy Named Steve 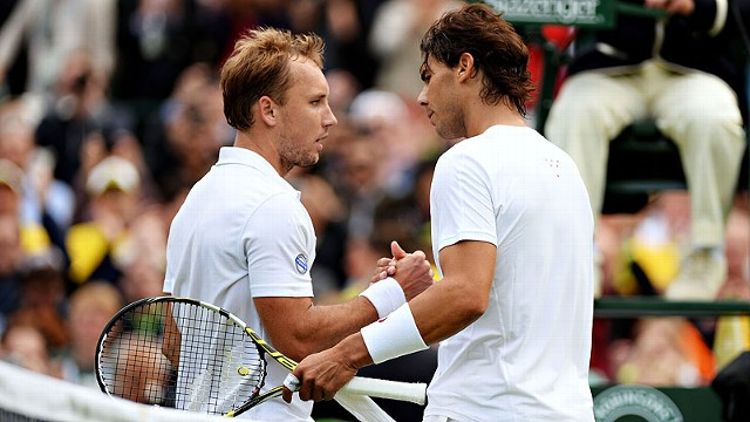 Then along came a guy named Steve. Yeah, Steve. Steve Darcis is 5-foot-10 and 161 pounds. He is 29 years old and badly balding. Entering today’s match, Darcis had played 151 matches in his career. Nadal had won 164 matches at majors. Darcis’s record this year was 2-6. Nadal’s record this year was 43-2. Darcis was ranked 135th in the world. Nadal was on a 22-match winning streak. Darcis had a one-handed backhand. Nadal ate one-handed backhands for snack.

The story of Nadal’s dominance against one-handed backhands is an old one. (Inevitably, it’s also overstated. He actually lost to a one-hander, Horacio Zeballos, on clay, and he’s dropped sets to several one-handers he’s faced this year. But he was just coming back from a seven-month layoff when he lost to Zeballos, and — 43-2!!!) His high-bounding heavy-topspin forehand bounces straight up around the shoulders, making it hard for a one-hander to swing through comfortably. Since he’s a natural righty, his two-handed backhand is almost a natural forehand. So, he wins.

Today, though, Nadal’s backhand was a disaster. His forehand wasn’t what it usually is, either. Presumably because of his bad knee (he refused to talk about it after the match), he wasn’t able to propel himself through his shots, and he appeared to avoid hitting his two-handed backhand, which puts a load equivalent to half a ton on his knee. Instead, many of his shots were short, and he floated an unusual number of backhand slices. Instead of having to corral deep, high-bouncing balls that spun a million times per millisecond, Darcis was able to swing through his backhand and keep Nadal, miserable, running. Unlike Nadal, Darcis was also able to do damage with his slice — a wicked shot that bit the lines, varied the points, and kept Nadal from finding a rhythm.

Last weekend, Christopher Clarey wrote a terrific piece about the vanishing one-handed backhand. Many top veterans still use it, but juniors are practically more likely to use a wooden racket. At the end, though, Clarey made an interesting point: There’s more than one kind of one-handed backhand. The slice is its own weapon. Just ask Steve.

If you can find him. The 135th-ranked Darcis spent most of the year on the Challenger circuit, where the purses are peanuts and the grind is hard. Nadal’s future, though, might look even grimmer. If his knee really was bothering him as much as it seemed, he may need to reevaluate how much he can play on grass and hardcourts at all. “After ending the career, it would be nice to be able to play football with friends, or tennis. But with this surface, I don’t think it’s going to be possible,” he said at a press conference earlier this year. If that’s sooner rather than later, then we’re all losers today.