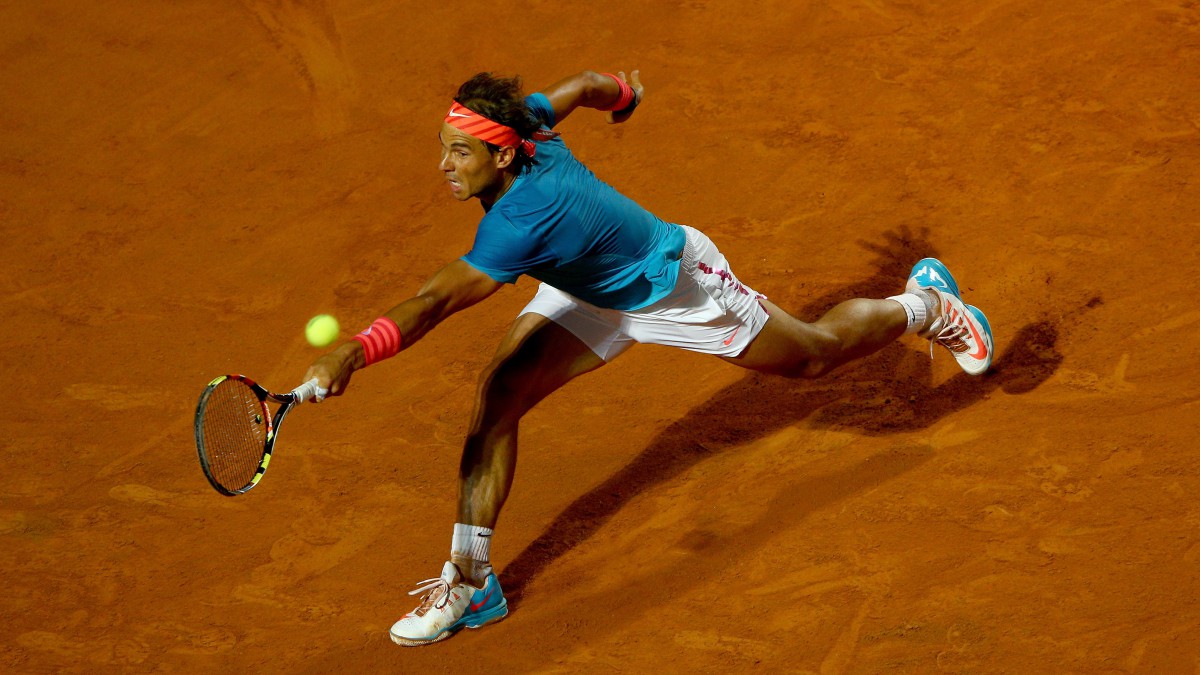 Where were you when I was king in this part of town?
—Belle & Sebastian

The atmosphere changes when you arrive in this place. It galvanizes; some sort of latent potential in the air and the crowd and the crushed red brick that the tournament calls clay wakes up, startles into focus. Whatever electrons do, they do it faster in your presence, and you sense this, you see it on the faces of everyone you meet: It is one of the things you know about yourself. If you thought about this knowledge at all, it might strike you as strange, analogous in some way to the problem of the afterlife: No one can know what lies on the other side of death, and no one can know what a room is like in the moment before they enter it. Yet you do. Consciousness is a light that illuminates only itself, perhaps, but yours shines so brightly here that you have never had a need to think beyond it. When you are here, you know.

And besides, there are those faces. Imploring, earnest, eager, the jostling children begging for your signature on headbands and yellow balls and programmes officiel; they know how to find you, somehow, from the moment your car arrives, and they line your path hoping to capture any talisman, any proof of having once been in your presence. There are the faces of the security men who accompany you, scowling over their black square suits. When they see you, their eyes harden, they set their shoulders as if to say now for the real thing. Once, while you were playing here, a bare-chested man leaped onto the court and rushed toward you, wearing a white mask and brandishing a burning flare. The guards tackled him before he could reach you, and you shook one of their hands; the pictures ran in 500 newspapers.

You and your rivals move around this place like heads of state, accompanied and anticipated, but it is not the same for them as for you. Not for Novak, not even for Roger, who won here once. You have won here nine times, nine in 10 years, and except for Roger, no other man on the tour has won here at all; the last retired years ago. Your dominion here has been so complete that since the first time you entered the tournament — you were 18; you won it — you have lost only one match. This place has really and deeply been yours, and so the spectators who see your entourage whisk by are more wonderstruck, and the umpires who shake your hand before a match are more grave, and the players on the other side of the net are in many cases more terrified, than they would be for anyone else. You have long since passed the point where you found anything strange in this. It is simply a circumstance, a milieu. It is a legible feature of the reality of your existence.

It makes you arrogant, perhaps, in the way that anyone becomes arrogant when doors are always opened for them and needs always met in advance; you are aware that your world orbits around you. In another sense, though, you have never been arrogant, because you have never had to depend on the admiration of the crowd to tell you who you are. The quality that makes you a great tennis player also insulates you from a certain kind of corruption. You have a wild current of inner strength that means you are always at your best when you are losing, when you are fighting, when you are in danger. In 2006, when Roger had never been beaten in the final of a major, you lost the first set to him 1-6 and came back to win the match. In 2013, Novak crushed you in a tiebreak to force a fifth set in your semifinal; you won it 9-7. This is another thing you know about yourself: In moments of apparent weakness, you find the thread that leads in your mind to a place where you will not be beaten. And so unlike with Novak, who wants the fans to lift him up and blames them when they decline, the quickening effect that you have on this place is somehow one-sided. The crowd is feeding on something in you, not you on something in them.

And if you thought about it at all (though why would you?), you might see a paradox in this, that here, in your place of greatest safety, your success has depended on a strength that grows in proximity to failure. Which is not to say that you have flirted with failure here often. But where Roger, say, plays from the top, finds inspiration in the distance between his own glad grace and the heavy lunging of his opponent, you play from the bottom, raking your way up from desolation and mire. Your ideal shot is not un coup droit inspiré, not some exquisite display of creativity and skill; it is a cry of refusal, a forehand thrashed from 2 feet behind the baseline into the far corner, directed half at your opponent and half at the impudence of the idea that you could lose. You would never frame it that way, of course, but you have some inkling of this; hence your constant, wry attempts to paint yourself as an underdog, your unwillingness to accept, after five, six, seven titles here, that you could ever be considered a favorite. You are always alert to the possibility of a collapse that — here, at least — has always been entirely imaginary. And that tiny thrill of tension, more than anything, is a sign of the hold this place has on you.

So here is where you are: back on the red brick that everyone calls clay. Back at the place where you have enjoyed triumph after actual triumph while fleeing theoretical despair. Now, though, after two years during which you have seen your bad dreams come true almost everywhere else, this place looks more like an island than ever. Your skills have eroded, your results worsened — only not here, not yet.

Last year, you arrived facing the gravest doubts of your career, then won anyway, going through David, Andy, and Novak in your last three matches, clawing your way back into two of those after dropping the first set. This year, the doubts are louder, the predictions worse. You have not won a tournament during this clay-court season. You have been passive, slow. You lost to Novak in the semifinals at Monaco. Andy, who had never beaten you on clay, destroyed you in Madrid. Then Stan, whom you’d beaten 12 times in 13 matches, did to you what you’ve so often done to others, brawling back from four set points to win 7-6 (9-7) 6-2 in the quarterfinals at Rome.

There was a turning point in your match against Andy. You had been sloppy in the first set, distracted; you let him run out to a 4-1 lead. At 4-2, with Andy serving, you hit a colossal down-the-line forehand to set up two break points: your chance to get back on serve. And here is where you would normally have pushed your game someplace overblown and overwrought, where you would have overwhelmed Andy by making it all mean too much, more than any other player could let it mean. Instead, at 40-15, you crushed a forehand into Andy’s deuce corner and missed the line. And then you went away. Andy won the game, and never looked back from 5-2. You looked bewildered — you’d reached for your passion and found something vague, a blank.

The idea that you could win here seems impossible. The idea that you could lose here seems impossible. Can you believe in either outcome yourself? You are a 28-year-old with a destroyed left knee and a battered back, and Novak, who wants this title more than anything, is playing unassailable tennis. Your confidence is staggered. But you are here, where you have always been invincible. And you are always at your strongest when you believe you are about to lose.

Do you sense something different this year in the way people look at you? As though they wonder whether you’ve heard the news? The king, but for how much longer; the walking embodiment of the benefit of the doubt. You are the sixth seed — sixth! — in a tournament where the only man to beat you last played in 2011. Perhaps, for you, growing old will mean reenacting the same drama on a slower and slower timescale, so that the furious comeback you once would have completed in a match will now take place over the course of a month, a season. So here you are, late in the fourth set, trailing. What will you do?

Your career has always seemed heroic because you faced a larger quotient of doom than any other player, and your career has always seemed neurotic because so much of the doom seemed to originate within yourself. Now it seems real. Not for the first time, but for the first time here. And if you thought about this moment, as you must, it might strike you as analogous to the problem of … but oh, who knows. You see it coming. You have always seen it coming. No one can know what a room is like in the moment before they enter it. Here you are, with your bag and your knee and your records. It’s time. Someone is opening the door.