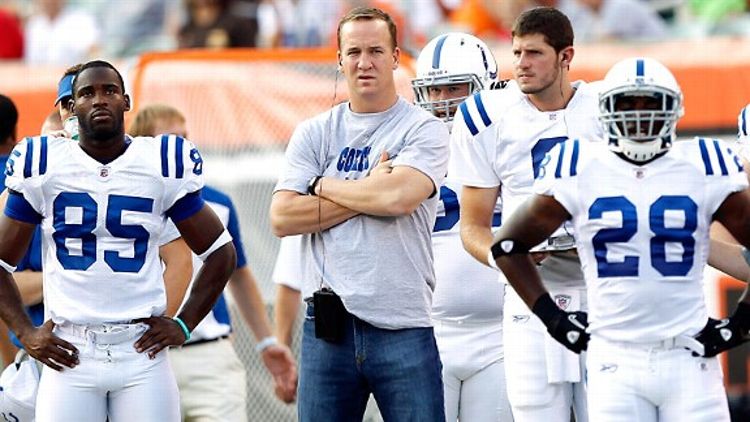 The further away it gets, the harder it is to remember the way Peyton Manning conducted an offense; the way he would adjust protection packages, re-route wide receivers, and confuse opposing defenses, orchestrating drives at a relentless tempo. It didn’t matter if the drive resulted in six points or not. Manning would storm off the field, heading to the sideline to look at plays and analyze mistakes in search of an almost impossible, inhuman perfection.

When you think of those drives, it makes it all the more stunning to see what a sad, human position Manning is in now.

On Wednesday, Manning underwent an X-ray and checkup on his surgically repaired neck. According to ESPN’s Adam Schefter, Manning is hoping that the X-rays will show nerve regeneration, allowing him, crazy as it might sound, to play in this Hieronymus Bosch painting of a Colts season. While Manning waits, retirement rumors swirl, suggesting that the Colts might be preparing for a new phase of the franchise’s history, perhaps one with a little more Luck. It is not an overstatement to say that the next 10 to 15 years of the Indianapolis Colts franchise depends on the results of those X-rays.

I hate to see anyone in a position where they’re waiting to find out if their livelihood is going to be robbed of them or if their quality of life is about to be severely impacted, but something about this entire process has made me feel something I never thought I’d experience: I have sympathy for Peyton Manning.

I never hated Manning, and always respected his ability and enjoyed his “subversive” comic appearances in commercials and Saturday Night Live, but I also never connected with him as an athlete. There was something joyless about the way he played, like football was this drill he was performing over and over again. Regardless of a drive’s result, Manning would stalk off the field with a gait that said, “That wasn’t good enough.” And honestly, that was pretty tiresome.

With this surgery, Manning has been reduced to mere mortal, and for as much as the NFL has lost a player, it’s been interesting to watch it gain a personality.

Seeing him on the sidelines, dorkishly walking around with a Colts polo shirt tucked into chinos, wearing an earphone as a procession of ham-fisted, tone-deaf conductors like Curtis Painter and Kerry Collins try to play his symphony, and fans who once wore his jersey now wear that of a kid who still lives in Palo Alto, Manning has generally appeared humble, good-humored, and most of all, like a really decent teammate.

In sports, most injuries come with a definitive timeline: surgery-recovery-rehab-return. Manning’s neck surgery is only mysterious in a world where high ankle sprains require “x” amount of time off and tendinitis requires “y.” For most people on most other walks of life, maladies don’t come with a timeline to follow.

Manning’s problem has been different than most other athletic injuries. Full of false starts, false hope, rumor, innuendo, doomsday scenarios, and wishful thinking, what he has gone through is what most people go through when they have a serious injury or illness; they deal with not only a medical problem, but the loss of control over their present and the mystery surrounding their future.

Wisconsin-North Carolina: A Victory in Retreat