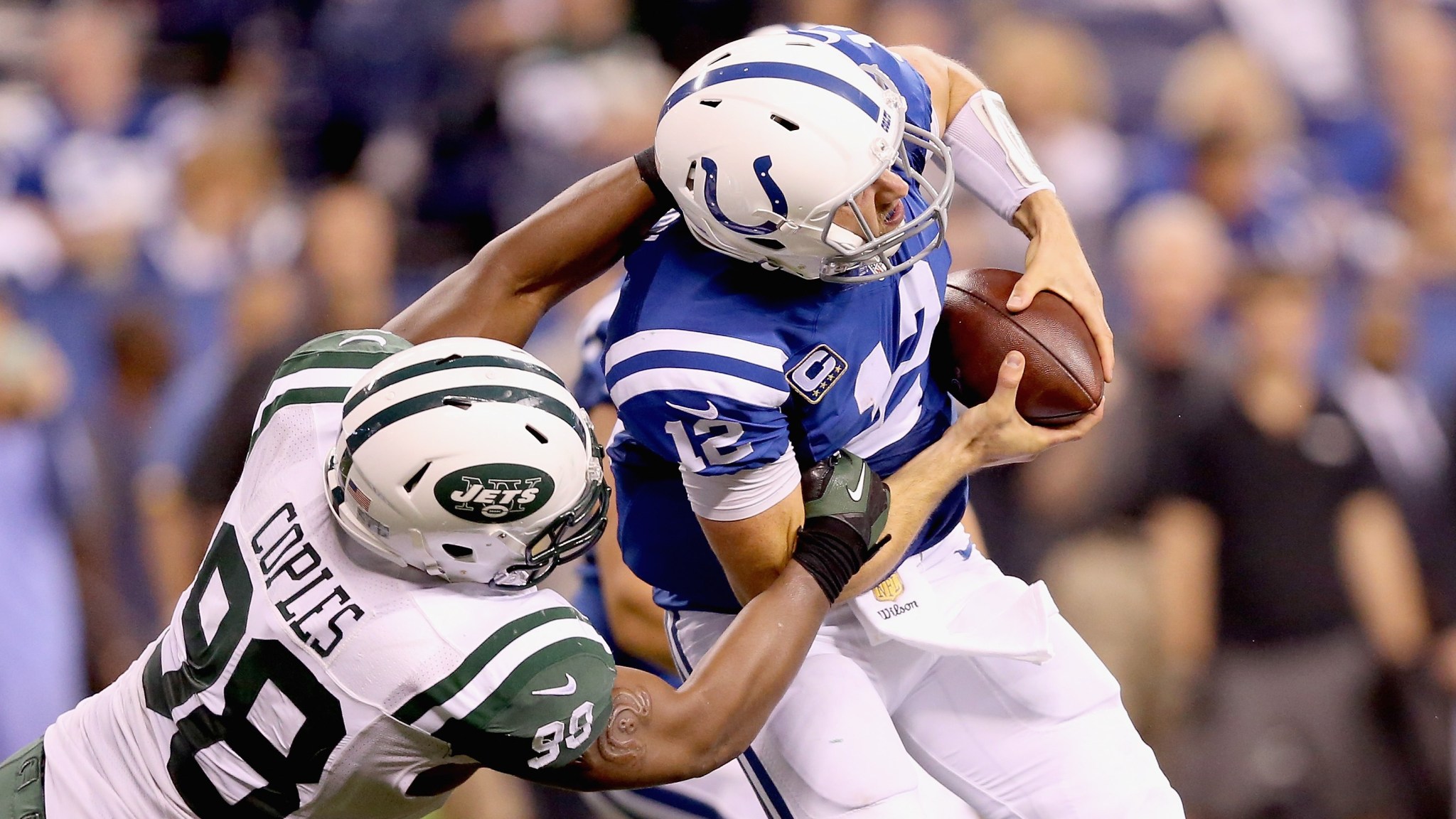 It’s an old Bill James truism that bad teams seem to blame their problems on their best players, so it’s no surprise that we woke up Tuesday to the argument that Andrew Luck was the one to blame for Indianapolis’s 0-2 start. Indy has started what looked like an all-in 2015 season with consecutive 13-point losses to teams quarterbacked by Tyrod Taylor and Ryan Fitzpatrick. Last night, they threw a pass to Joe Reitz and needed unknowns like Sheldon Price and Jalil Brown to play meaningful snaps at cornerback. And afterward, this happened:

Pagano on Luck and #colts leaky O-line: ‘Been the case for 3 years now, has it not? Should be more than comfortable dealing with (it).’

It doesn’t take much to see where Chuck Pagano’s argument really stands. I’m sure he’s criticizing Luck some for how he’s played through this 0-2 start, of course, but the shot between the lines is aimed squarely at general manager Ryan Grigson, with whom Pagano is reportedly feuding. I suspect that the Colts will get better, that they can (and will) be the first team in league history to make it to the playoffs in consecutive seasons after starting each of those years 0-2. But Pagano is not wrong about Grigson. And honestly, he isn’t really wrong about Luck.

Every quarterback plays worse under pass pressure. Much worse, actually. And Luck is no exception. One again, Pagano is right: Luck has been pressured a lot, but it shouldn’t be anything new. He is being pressured at about exactly the same rate as in years past, but the difference is that he’s playing worse just about across the board, regardless of whether he’s under attack:

The Colts have allowed Luck to be hit at an astronomically high rate for years. Per Football Outsiders, Luck was knocked down 328 times by opposing defenders between his 2012 debut and the end of 2014. The second-most-hit quarterback, Matt Ryan, was knocked to the deck 260 times during that span. The difference between the number of times Luck has been hit and the average hit frequency of every other NFL quarterback amounts to 68 hits, roughly a full regular season and a few playoff games’ worth of knockdowns for your typical NFL quarterback.

Luck’s style is going to lend itself to more hits, but nobody should be that much of an outlier. Indianapolis’s offensive line simply isn’t very good, and it hasn’t been since he arrived. Much of that has to fall on Grigson, who has made decisions in free agency that seemed ill-advised the moment they were made. He inherited the team’s best offensive lineman, left tackle Anthony Castonzo, who was the last first-round pick made by Chris Polian before he left the franchise, along with utility lineman Joe Reitz. Given a three-year, $8 million extension this offseason, Reitz played six snaps Monday night when the Colts went with an unbalanced line during the first half. He was targeted on an 11-yard out which fell incomplete.

Grigson, blessed with one of the league’s biggest bargains while Luck made a fraction of his actual value between 2012 and 2015, hit the offensive line market and came away with little. In moves that were panned at the time, he gave Lions tackle Gosder Cherilus and Patriots backup guard Donald Thomas hefty deals that seemed to outpace their likely markets. Neither worked out; Cherilus was a middling right tackle and Thomas played just two games amid a series of injuries before each was released this offseason. Journeyman Lance Louis has taken the reins, starting nine games over the past two seasons on the interior, while former Eagles standout Todd Herremans — on an admittedly palatable one-year deal — hasn’t panned out yet.

And it’s not as if Grigson did much to help Luck’s protection in the draft, either. He has spent lavishly on receivers for his star quarterback, re-signing Reggie Wayne and then replacing him with Andre Johnson in free agency, while using first- (Phillip Dorsett), second- (Coby Fleener), and three third-round picks (Dwayne Allen, T.Y. Hilton, and Donte Moncrief) to provide him with weapons. On the offensive line? Not so much. Using Chase Stuart’s draft value chart, the Colts have spent the sixth-smallest amount of draft capital on offensive linemen since 2012:

And even those precious few picks have been a mixed bag. Hugh Thornton, a 2013 third-rounder, can’t beat out Louis as a starting guard. Fourth-rounder Khaled Holmes is starting at center, but he hasn’t been very effective. And although 2014 second-rounder Jack Mewhort had a promising debut season at guard, the Cherilus decision coincided with a move to right tackle, where he struggled mightily against the Jets last night. Luck should be used to the protection woes, but it doesn’t change the fact that Indy has struggled to protect its star quarterback.

Both the Bills and Jets adopted the mantra of big-blitzing Luck and daring his receivers to get open behind the pressure. As I wrote about last week, Luck has had success against blitzes in the past, but that hasn’t been the case this season. He has been blitzed on a league-high 45 dropbacks, and the results have been ugly: Luck has taken only two sacks, but he’s 19-of-43 for 274 yards with three touchdowns, four picks, and a lowly QBR of 15.4. Only Sam Bradford, Alex Smith, and Russell Wilson have been less effective against the blitz, and they haven’t been blitzed anywhere near as frequently.

If I’m being honest about those problems, I’m not especially concerned that they’ll continue to shut down the Indianapolis offense, and it’s for the same reason Pagano mentioned: Luck is used to this. There is little reason to think he has suddenly lost all of his effectiveness and ability to handle blitzes. It’s far more likely that we’re dealing with a two-game sample of poor play. Luck posted a 28.5 QBR to start the season, which is the worst two-game stretch of his career but not a serious outlier. He posted a 28.6 QBR during a two-week stretch of 2013 that notably included a game against the Arizona Cardinals, whose defense was coordinated at the time by Todd Bowles.

Bowles, of course, is now the head coach of the Jets. And like Rex Ryan, who pressured Luck into the ground in Week 1, Bowles has been one of the most blitz-happy defensive coaches in football over the past few seasons. While I’m sure he appreciated how much success Ryan’s Bills had against Luck with blitzes up the A-gaps, I also think he hardly needed the encouragement. Bowles has had great success using heavy blitz packages with five- and six-defensive-back sets in Arizona, and after loading up on defensive backs this offseason, he’s off to a strong start in New York.

As good as the Jets have been on defense, it’s also fair to note they’ve been extraordinarily lucky. Eight fumbles have hit the ground in the first two weeks, and the Jets have managed to recover all of them. As tempting as it is to say that there’s something about Bowles motivating the team or the Jets having something to prove, there’s nothing more than total randomness behind that; I included the GIF of Ryan Fitzpatrick recovering a bad snap in my Week 2 picks column, and history tells us there isn’t a single team that recovered a disproportionately high percentage of fumbles year after year, let alone 100 percent of the fumbles in its games.

What’s even more remarkable is how valuable the Jets’ fumble recoveries have been. Some fumble recoveries are the sort of shifts in midfield that result in a change of possession and little more. The Jets have a few of those, but others have been far more valuable. That Fitzpatrick fumble is the prototypical example: If one of the many chasing Browns picks up the football, he either walks in for a touchdown or gets the offense the ball in the red zone with a possession that’s worth four to five expected points.

The Jets have derived significant value from many of those fumble recoveries. Three of the eight have come inside their own 5-yard line, including the Fitzpatrick fumble and a pair of stops almost literally on the goal line. Josh McCown and Frank Gore have fumbled inside the 1-yard line in consecutive weeks, with the Jets not only recovering both times but managing to earn a touchback that throws in 20 yards of field position. Those are about eight-point swings that the Jets have twice managed to come up with.

Teams have taken four trips into the red zone against the Jets this season and come away with three points. Three. That’s 0.8 points per trip. The rest of the NFL is averaging 4.9 points per red zone possession. They also picked up two Cleveland fumbles in Week 1 that gave the Jets possession inside Cleveland’s 26-yard line, creating short fields that produced a pair of touchdowns for Fitzpatrick’s offense.

Even if the fumble and red zone stuff isn’t likely to recur, there’s a good chance the Jets are going to have a stout defense this season. The same is true of the Bills, who gave Luck and the Colts fits in Week 1. Do you know who isn’t likely to be quite as good on defense the rest of the season? The rest of the AFC South, and that’s who the Colts play over the next three weeks. If you’re looking for a reason to be positive about the Colts, that’s a good place to start.

The Colts perennially face one of the easiest schedules in the league, and that isn’t changing. Even after their run around the South, their games against the Patriots and Broncos will be interspersed with the Saints and Panthers. They get the Falcons, Buccaneers, Steelers, Jaguars, Texans, Dolphins, and Titans after the bye. Given how teams have performed over the previous two weeks and the 2014 campaign, it’s fair to suggest that the Colts have already played two of the three toughest defenses they’ll face all season by the middle of September.

And while there are definite issues with the way this team’s roster is constructed, they’re not likely to be as vulnerable in the weeks to come as they were Monday night, when they were down two regular cornerbacks in Greg Toler and Darius Butler before losing no. 1 corner Vontae Davis to a concussion. The Colts will probably not be stuck starting replacement-level players at corner the rest of the way, if only because Grigson will probably trade a draft pick for a veteran corner if things don’t get better anytime soon. His aging free-agent additions from this spring have been a disaster, but it’s hard to imagine that Herremans, Frank Gore, Andre Johnson, and Trent Cole all hit the wall at the exact same time. Adam Vinatieri, who missed one field goal in 31 tries last season, has missed his first two kicks. Even if these guys don’t live up to prior expectations, they should at least retreat toward competency in the months to come.

What it comes down to in the long run with Indianapolis, as always, is Luck. The Colts are blessed with one of the best quarterbacks in football, and he’s going to face a much easier slate of pass defenses the rest of the way. Even if Pagano’s defense struggles or Grigson’s signings and draft picks miss badly, Luck should be able to carry the Colts forward. As long as he stays healthy and the rest of the division doesn’t get drastically better, Indianapolis should be a competitive football team. It’s been the case for three years now, and we should be comfortable dealing with it, even after another 0-2 start.