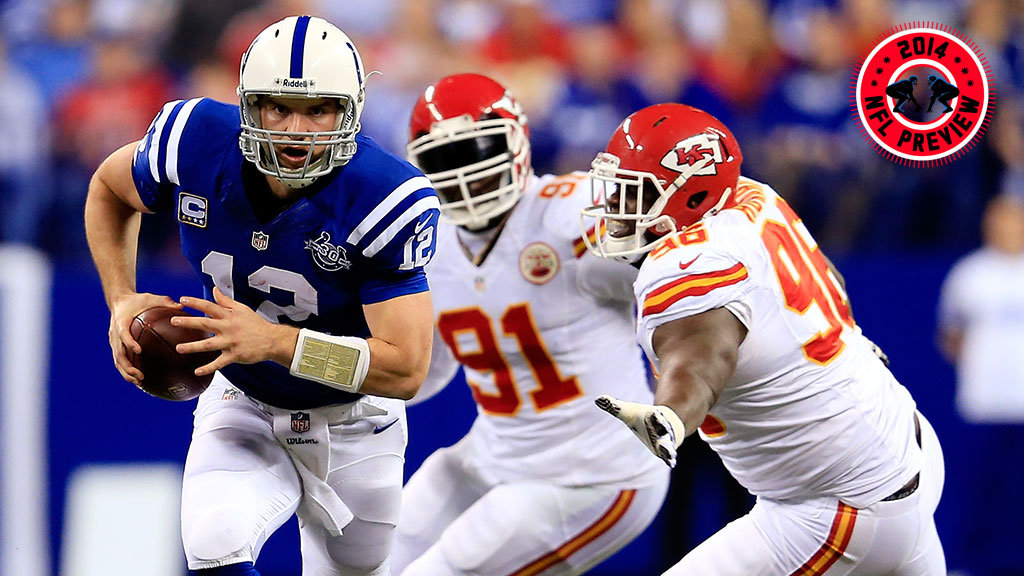 At 8:06 p.m. on Thursday, April 26, 2012, the Indianapolis Colts selected Andrew Luck with the first pick of the NFL draft. At 8:07 p.m., the Indianapolis Colts started worrying about how to protect Andrew Luck. Handed the best quarterback prospect of his generation courtesy of great timing and a 2-14 season, new general manager Ryan Grigson, head coach Chuck Pagano, and then–offensive coordinator Bruce Arians were left with the job of keeping their star passer upright in the years to come.

To their credit, both Grigson and Arians have made an effort to keep pressure off their franchise quarterback. Grigson threw a large chunk of Indianapolis’s ample cap space at offensive linemen like Donald Thomas and Gosder Cherilus in 2013 in the hopes of providing a stable front five in front of Luck, and then spent second-, third-, and fourth-round picks on offensive linemen during the 2013 and 2014 drafts. When Arians left for Arizona, Pagano hired Luck’s former offensive coordinator at Stanford, Pep Hamilton, to install a run-first offensive scheme. The team even traded its 2014 first-round pick to acquire a would-be franchise back in Trent Richardson. You can understand why Grigson & Co. made the moves they did, even if the prices were out of whack. You also need to see only one table to know the moves haven’t worked. Here, per the Football Outsiders Almanac 2014, is a table listing the 10 quarterbacks who were knocked down most frequently over the past two seasons:

Gulp. That’s terrifying to see if you’re a Colts fan, yet Andrew Luck really hasn’t shown even the slightest hint of an injury at any point. He’s never been listed on the injury report as anything worse than “probable,” and Luck’s last notable injury was a fractured finger he suffered during his freshman season at Stanford in 2009.1 I can’t think of a single play after which Luck has even gotten up slowly. He just looks and seems unbreakable, a fact that many chalk up to his 235-pound2 frame.

Today, that bizarre juxtaposition goes underneath the microscope. How can Andrew Luck get hit far more frequently than anybody else in football and never get injured? Is it a fluke? A product of his build? His playing style? There are too many variables to ever get a perfect answer, but let’s run through some of those questions to see if the Colts are blessed with the quarterback who cannot be harmed.

Health is a funny thing to write about. My old friend Will Carroll is fond of noting that health is a skill, and he’s right; it’s no accident that a passer like Peyton Manning managed to make it through 16 games year after year without being bothered by nagging injuries, while a quarterback like Ben Roethlisberger seems to miss a couple of games every season. That could be because of some physical component (which I’ll get to in a minute), but there’s also unquestionably some level of ability involved. Roethlisberger is famous for waiting until the last possible second to get the ball out, leading to an almost comic tradition of being surrounded by blitzers in the pocket while he patiently waits for somebody to get open. Manning gets the ball out far more quickly and has a better sense of where to move within the pocket to avoid pressure, which gives opposing rushers less of a chance to hit him. Yet health can also be totally random; Manning eventually suffered from the debilitating neck issue that cost him his entire 2011 campaign, while Roethlisberger suffered a broken jaw and various other injuries in a 2006 motorcycle crash. Skill helps, but randomness still happens.

So, what are the chances your starting quarterback will stay healthy? Depends on the quarterback, but history can tell us what the chances are in the aggregate. During my time at Football Outsiders, I did plenty of research into injuries and found what an average team could “expect” to have happen during an average year of health. Using data from 2002 to 2009, I found that teams make it through the season without their desired starting quarterback missing a game due to injury a little more than 55 percent of the time. The average team, over that time frame, saw its intended starter at quarterback miss 2.2 games per season.

The problem in using that data to analyze passers like Luck is that we know all quarterbacks aren’t created equal. If the likelihood of a passer missing time from season to season were truly independent, we would expect only about 55 percent of the passers who stayed healthy in any given season over that time frame to make it through 16 starts the following year. Instead, quarterbacks who started 16 games in a given season over that stretch stayed healthy for the following season closer to 70 percent of the time. With each year a quarterback stays healthy (and productive enough to remain in the lineup), the chances are greater that he’ll continue to show up for 16 games of work the following season. There just aren’t many quarterbacks like Luck, who is one of five first-round selections at quarterback since 1990 to start all 16 games in each of his first two seasons. That 55 percent figure is likely low for him, even with all the hits. And that’s without considering …

Luck certainly looks as big as many of the players who are trying to hit him. Does that make him more likely to absorb hits and stay healthy? Or does it slow him down and create more sacks by virtue of an inability to get away from tacklers?

One of the issues with answering this question is that quarterback knockdown data basically doesn’t exist. While the NFL has sack data going back through the early ’80s, the league started tracking quarterback knockdowns on plays that didn’t result in a sack only a few seasons ago, and there are still disparities from stadium to stadium on how likely given scorers are to track hits. ESPN Stats & Information has hit data going back through 2010. The Football Outsiders numbers make it very clear that Luck gets hit more than anyone else in football, but he doesn’t get sacked on a notably frequent basis; his 5.7 percent sack rate over the past two seasons is slightly above average. Many other passers who are hit on a regular basis in the table above, though — Tannehill, Flacco & Co. — get sacked at a higher rate than the league average. Given the data shortage, we have to use sacks as a proxy for hits.

Now we need to put Luck’s size in context. He’s big, but how big exactly? And to compare him to players from other years, we need to adjust weights for the era in which they played. To do that, I used the average height and weight of the defenders on the first-team All-Pro squad (again as listed by Pro-Football-Reference.com) as a proxy to figure out the height and weight of the typical defender a quarterback might face.3 Then, I compared the quarterback’s listed weight to that of the average defender before putting the resulting figure into percentiles. And then I did the same thing for height.4

In context, Luck is big, but he’s not extraordinarily big. His adjusted height is in the 50th percentile for starting quarterbacks since 1970, while his adjusted weight is in the 90th percentile. That doesn’t even leave him among the five largest quarterbacks by weight percentile in football from last season. Cam Newton (99th percentile), Nick Foles (98th), Ben Roethlisberger (96th), Josh Freeman (96th), EJ Manuel (93rd), and Sam Bradford (91st) are all larger than Luck. Those guys weren’t the picture of health! Newton threw every pass for the Panthers last year, but he has the only unimpeachable résumé of health in that group. Roethlisberger played in all 16 games for just the second time in his 10-year career. Foles missed a game with a concussion after breaking his hand the previous year. Manuel missed six games with a variety of knee ailments. Bradford tore his ACL. I guess Freeman technically stayed physically healthy, although he might have been better off faking an injury.

Even in the broader sense, I don’t know that extreme size at the quarterback position is necessarily a reliable hedge against injury. The quarterbacks who showed up as ranking in the 95th percentile or higher in terms of weight didn’t seem to enjoy injury-free careers. There were passers who suffered from nagging injuries that cost them games throughout their career (Roethlisberger, Vinny Testaverde, Byron Leftwich, and Kerry Collins), quarterbacks who primarily suffered traumatic events (Scott Mitchell, Daunte Culpepper, and Donovan McNabb), and passers who sadly lost their way off the field first (Freeman, Ryan Leaf, and JaMarcus Russell). Of the heftiest passers in league history, really only Newton and Roman Gabriel managed to stay in the lineup year after year without getting injured, and we’re still only three seasons into Newton’s career.

Expanding the group out a bit, we can look at those passers who were in the 75th percentile or higher for both era-adjusted weight and era-adjusted sack rate.5 There’s no relationship between the two figures; the correlation coefficient between adjusted sack rate and adjusted weight is -0.04. Many of the same players from the group mentioned above fit in here, and the new names who profile as similar to Luck don’t provide a sunny outlook of health. Jim Plunkett was healthy early in his career before injuries wore him down and pushed him into a reserve role, after which he had a late-career resurgence that was eventually interrupted by injuries. Rodney Peete was never healthy. Neil O’Donnell had one complete 16-game season as a starter, as did Tony Banks. Gus Frerotte had injury and ability problems. Dave Brown was healthy, but so bad at quarterback that he nearly made me stop watching football growing up as a Giants fan. The only other positive comparison I can find who might fit in this box is Flacco, who hadn’t missed a game or even been listed as “questionable” on an injury report until Week 16 of 2013, his sixth season, when he was questionable for a must-win game against the Patriots and clearly struggled with a knee injury.

Do those comparables mean Luck is due to get injured or unlikely to stay healthy going forward? Not at all. What it tells us in the face of imperfect data, though, is that being big isn’t enough reason to assume you’ll stay healthy. If Luck is going to continue to be a guy who suits up for 16 games a year like clockwork, it’s not simply going to be because he’s too big to injure. It’s going to be because he’s talented, has incredible instincts, and has a faint touch of, well, luck.

If the Colts can do something to help keep their quarterback unmolested and healthy, it would be avoiding obvious passing situations. That’s where teams tee off on Luck. On first and second down last season, ESPN Stats & Information’s numbers note that Luck was pressured on 24.5 percent of his drop-backs. On third down, that figure rose to 32.9 percent. And then, more notably, Luck gets attacked on third-and-long. On third down with 7 yards or fewer to go in 2013, Luck was pressured just 23.0 percent of the time. With 8 yards or more required for a new set of downs, that figure more than doubled, as Luck was pressured on 47.8 percent of his drop-backs. More on those schematic problems when Andrew Luck Week concludes on Friday.