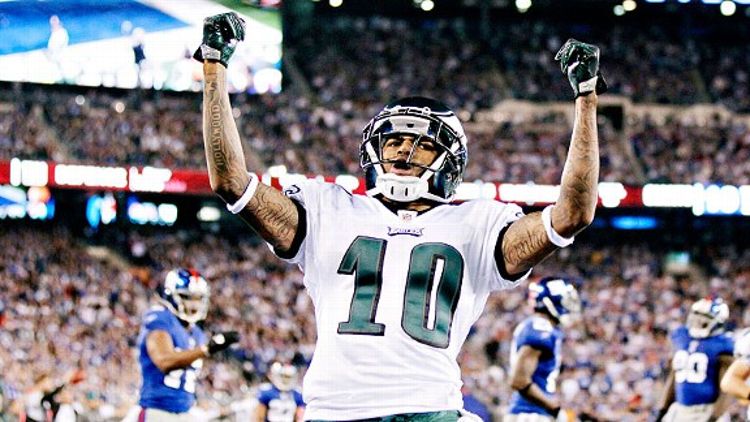 Finally, a winning week! If you followed my Thanksgiving propositions, you probably ended the day stuffing your turkey with 100 dollar bills or uh … 100 jermajesty bills. (Obligatory weekly explanation: a “jermajesty” represents the fake name given for a dollar amount. It is also the unfortunate name of one of Jermaine Jackson’s sons.)

Last week I cut into the deficit by 12,250 jermajesties taking my total to -110,250 jermajesties overall. There’s hope — I MIGHT be able to splurge and get the old lady a scented candle for Christmas after all.

DeSean Jackson over four receptions vs. the Seattle Seahawks (-145)
Between taunting penalties nullifying big catches and dropped balls in the end zone this mothereffer is about to single-handedly kill my fantasy season. I can’t imagine how infuriated I’d be if I wasn’t in six other leagues. Just a hunch — soon-to-be-unemployed Eagles coach Andy Reid lights one last fire under the Pro Bowl wide receiver’s ass. And if not — go ahead and light a fire to the remainder of this lazy troublemaker’s contract. 20,000 jermajesties

New England Patriots over 34 points scored vs. the Indianapolis Colts (-130)
This proposition might as well read, “On a scale of 1 to 10, how big an a-hole does Bill Belichick feel like being?” I’m not sure if the NFL has anti-bullying regulations, but it might put some in place after this game Sunday. 30,000 jermajesties

Most yards passing this week in the NFL: Aaron Rodgers (5/1) and Eli Manning (8/1)
I really like these. I’d like them even more if I knew the Patriots planned on yanking Tom Brady in the third quarter. I’ve seen enough of the Giants secondary and Eli Manning’s ability to accumulate garbage-time passing yards to know that a combined 1,000 yards in the air is not out of the question in this Sunday shootout. 5,000 jermajesties each

Chris Johnson to lead the league in rushing yards this Sunday (20/1)
Two weeks ago, I begged you to take this proposition. It wasn’t even close to winning. Last week I skipped it, and it was one Beanie burst away from cashing in. Probably a sucker bet to load up on a guy who rushed for 190 yards last week, but 20/1 is 20/1. And the Bills are milliseconds away from completely quitting on their coach. I’d like to make sure I’m there when it happens. 1,000 jermajesties

San Diego Chargers wide receivers Vincent Brown (12/1) and Vincent Jackson (7/1) to score the first touchdown this Monday night
While you’re at it, take a flyer on Vincent Diesel (I can call him Vincent — we’re very close) at (1500/1). With the wacky week the Jags are having, I wouldn’t be surprised to hear about a fast and furious last-minute signing. 1,000 jermajesties each

Don’t even bother looking for these online …

Over/under .5 people in the United States who will comment on what a great game Tim Tebow is having 57 ½ minutes into this week’s game vs. the Vikings
I’m going WAY under. As far as the last 2 ½ minutes go, well, let’s just hope God is busy doing his lawn this week. We could all use a break from the hocus pocus. Amen.

3/2 odds the Chargers will agree to do away with yellow Gatorade after the Nick Novak sideline incident
Not worth taking any chances. He could turn out to be one of the all-time great NFL pranksters. Actually, I don’t understand why Novak is taking so much heat for this. Would fans prefer it if he made number two on the playing field like the rest of his teammates do week after week?

New emerging Herman Cain mistresses vs. Kansas City Chiefs first downs against the Chicago Bears this week
I put both numbers at about 4.5 — giving a slight edge to the Republican presidential candidate. Like my Uncle Frank used to tell me, always bet pizza over Palko.

Under 2.5 season before ABC includes Stevie Johnson on their Dancing With The Stars roster
This fancy jig cost Johnson a cool 10 grand. How ironic is it that a touchdown dance that simulates getting shot in the foot actually comes back to shoot the player in the foot? The truth is, if anyone needed to be shot in the foot last week, it was Ndamukong Suh. Would’ve saved him a good amount of loot and perhaps Detroit’s season.

I’m nothing if not committed to my interrogations. Oddly enough, I HAVE been offered a job as the starting tailback for the Detroit Lions.