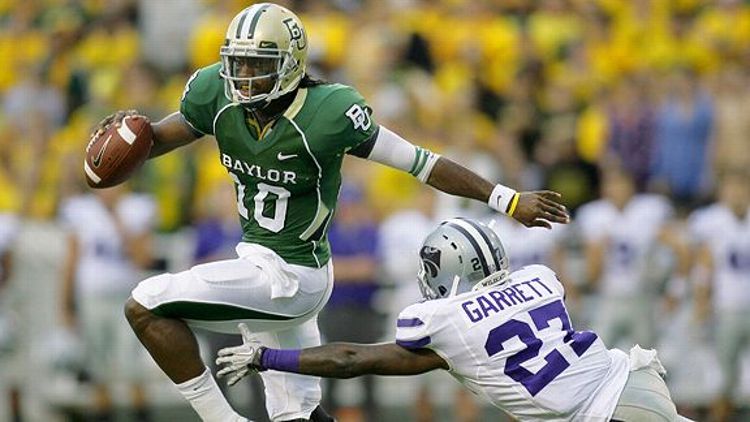 I stood across from one of the stunt men on the set of 2 Fast 2 Furious as he strapped himself into a Yenko Camaro and prepared to defy gravity. He was wearing a Miami Hurricanes hat and saying something about Willis McGahee being a man amongst boys. He asked me where I went to college.

“Baylor? They Division I?”

“Wacko.” The joke that never grows fresh. “That where that Koresh thing happened?”

I muttered something about being in grad school at that time, but his engine revved and I walked away, looking down at my feet.

It has been rough going for Baylor fans over the last 15 years. Every time we looked at a scoreboard or a newspaper, there was some shameful number, some fresh humiliation, some inconceivable scandal, or brazen mocking of the school. When you turned on ESPN or cracked Sports Illustrated, you would flinch like a battered spouse. Locked in the basement of the Big 12 South, Baylor became the school other teams clamored to schedule for our homecoming. Teams would hang half-a-hundred on us and it would hurt their rankings. We were Boo Radley, except none of the neighborhood kids were scared to run on to our porch.

Occasionally, there would be a glimmer of hope, a flash of brilliance. The 2005 baseball team went to the College World Series. Hell, the women’s basketball team won the national championship that year. I found myself with a sudden trigger-happy sense of moral superiority. One of my golfing buddies would say, “Yeah, but it’s women’s basketball,” and I’d say, “That’s right, you sexist Neanderthal. And mark that putt, no gimmies.”

Despite those occasional triumphs, a Willie Loman mindset pervaded the fans. I remember reading about an experiment where they wired the floor of a dog’s cage and would occasionally shock it. They ended up shocking the dog so many times that eventually, it would lie down in the corner and just take it. We became that shocked dog, expecting to pull defeat from the jaws of victory. Something good would happen — a strong drive, a nice run — and we would say to ourselves, “Just wait.”

And then something happened on the Brazos. A trio of coaches, in one case against the wishes of his family, took jobs in Waco: Kim Mulkey, Scott Drew, and Art Briles. No one told them they had to remain the Big 12’s doormat. No one told them recruits wouldn’t come to Waco, Texas. No one told them Baylor was the perennial punch line to a stale joke.

Or maybe they did. These three just refused to laugh.

Players showed up: Brittney Griner, Robert Griffin III, Perry Jones III. Wins showed up too. Mulkey has twice led the women’s team to the Final Four. Drew took the men’s team, a program that was left reeling in the wake of the Dennehy murder, to the Elite Eight. And Briles put the Bears in a bowl for the first time since 1994.

There is a foreign feeling sweeping Waco: pride. I find myself clicking on ESPN’s website more and more. On the active, unaffiliated fan site baylorfans.com, users are making bold predictions instead of fretting over inevitable collapses. Baylor gear is starting to show up in stores outside of Waco. I’m even thinking of adding a III to my son’s name … something magic must be in those numerals.

When the Big 12 was about to implode this summer, and Baylor’s administration went into a frenzied scramble to hold the conference together, Jim Rome went on a rant about Baylor. “You’re Baylor …” he spit over and over with his trademark snark. Know your place, was the implied message. Get out of the way of the realignment. “You’re Baylor.”

I live in Los Angeles, and I had a friend, a USC graduate, improbably call this week to see if he could come over and watch my team play Texas this Saturday. He had watched Griffin dismantle OU two weeks ago and wanted to see the Heisman candidate compete in his last regular-season game of the year.

“You want to come over and watch with me?” I said.

Derek Haas wrote the best-selling novel, The Silver Bear, and its follow up, Columbus. His new novel, Dark Men, will be in stores on Dec. 15th. He also co-wrote the films Wanted, 3:10 to Yuma, and 2 Fast 2 Furious.