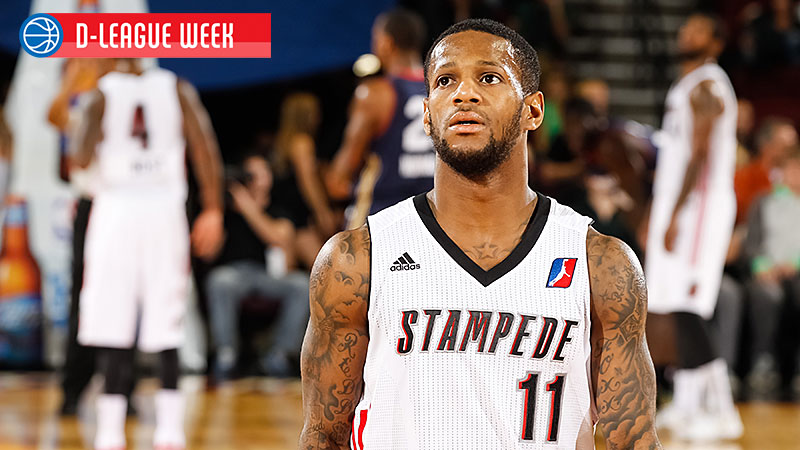 One of the biggest stories in the NBA D-League this season has concerned a player who seemed like he had no business playing there at all. Pierre Jackson, the 5-foot-10 point guard out of Baylor, spent the last few months performing Earl Boykins imitations from Delaware to Tulsa to Santa Cruz.

His numbers almost defy mathematics: 49 points on 20 shots against Fort Wayne; 40 points against Rio Grande Valley one week; 44 against the same team three weeks later. On back-to-back nights this month, against an L.A. D-Fenders team determined to keep him from scoring, Jackson averaged 15 assists. And then, lest anyone think he was in danger of becoming a pass-first point guard, he followed those performances with his masterpiece: 24-of-33 shooting against the Texas Legends, good enough for 58 points, the most in D-League history.

All of this raised the question: What the hell was Jackson doing in the D-League?

“I really don’t know what he needed to prove,” said Michael Peck, Jackson’s coach with the Idaho Stampede. “I spent all year thinking he was going to get called up to the NBA. He’s earned it. He’s earned at least a 10-day contract. This isn’t a flash in the pan. I don’t know of anyone in this league who has done what he’s done from a scoring standpoint.”

Jackson’s situation was peculiar. The Pelicans acquired him in a 2013 draft-night trade with the 76ers and soon announced their intentions to stash him overseas. After signing with a club in France, Jackson returned to the States before ever playing a game.

Because he never signed a contract with New Orleans, the 22-year-old Jackson entered the D-League in the same capacity as its hundreds of undrafted NBA hopefuls. Rather than going to the Pelicans’ affiliate, the Iowa Energy, Jackson was available in the D-League draft to be taken by any team. The Stampede, who are partnered with the Portland Trail Blazers, chose him fourth overall. And so it came to be that Jackson starred for a D-League team affiliated with a franchise that could not, at least while the Pelicans held his draft rights, ever call him up to the NBA.

Yet as Jackson continued to star, the Pelicans continued to indicate they had no use for a turnover-prone, undersize volume shooter. Jackson’s agent requested a trade. If the Pelicans wouldn’t offer him a contract, then surely someone else would. Yet by the time last week’s trade deadline arrived, no deal had materialized. So Jackson boarded a plane for Turkey. He signed with Fenerbahce, leaving behind his $28,000 D-League salary — and with it, his only chance of seeing an NBA floor this season.

“I can’t blame him,” Peck said. “That’s something that’s on a lot of players’ minds in this league. They give it a shot for a while, trying to make the NBA, but at some point, they take the money. They do what’s best for them and their families.” (Jackson couldn’t be reached for comment.)

Jackson’s departure leaves Idaho, the league’s seventh-place team, scrambling to replace the production of the man who seemed a lock for D-League MVP. But it also illustrates a tension that pervades the league. Individual goals and team goals are often at odds. And in a league where world-class athletes are playing to escape the tax bracket they share with waiters and construction workers, the individual goals must always come first.

It’s hard to assign blame for precisely who or what has prevented Jackson from getting a shot in the NBA this season. To start with, he’s an unconventional player. How many NBA teams are lining up to sign a 5-foot-10 scorer who has never been considered much of a pure point guard? What’s Jackson’s ceiling as a player? Boykins? Nate Robinson? And should New Orleans, the team that gave up assets to acquire Jackson’s draft rights, be expected to trade those rights if it hasn’t found a deal it likes or if it’s considering signing Jackson next season? While just about every player dreams of hearing his name called during the NBA draft, it has long been the case that undrafted players can have a better chance to catch on with a team that needs them by shopping their skills around, whereas players selected late in the second round are stuck with one team, for better or worse. You could argue that Jackson is stuck in a peculiar kind of NBA limbo right now, but he wouldn’t be the first player who’s ever found himself in that territory, and if he’s really good enough to make an impact in the league, chances are he’ll get there.

From half a world away, Nick Fazekas, star center for the University of Nevada in the mid-2000s and now a hired gun with the Toshiba Brave Thunders of the Japan Basketball League, watched Jackson’s situation with interest. “Good for him,” Fazekas said by phone a few days after Jackson left for Tukey. “He got fed up with it, and he got out of there. He was dominating that league, doing everything they tell you to do when you go there, and at the end of the day he was still sitting in Idaho. I’m sure he thought, What else do you want me to do? So he left.”

Like Jackson, Fazekas put up big numbers in the D-League, averaging 18 points and nine rebounds in 46 games over stints in three seasons from 2010 through 2012. “Everyone tells you you’re right on the cusp,” Fazekas said. “They say, ‘Just work hard, play well, and you’ll be in the NBA any day now.’ I fell into that trap. I believed it.”

The hope of a call-up, more than anything, keeps players from leaving the D-League to head overseas. High-level players in the top European leagues can make mid-six-figures. Even imports in mid-tier leagues typically earn enough to join the upper-middle class. By staying in the D-League, players spend years during which they could be earning top salaries instead toiling away for the unlikely goal of a steady NBA career. “You can make more money being a teacher,” Fazekas said. “You can almost make more money flipping burgers.”

The Pelicans have said they intend to bring Jackson into the fold for next year, so he should have a chance to play his way onto New Orleans’s roster. But even if he never catches on in the NBA, he’ll be merely the latest in a long line of players who have dominated the D-League without parlaying that performance into an NBA career. Of the league’s last five MVPs, none has gone on to play a full season in the NBA. “You see guys get called up all the time, and some of them catch on,” Fazekas said. “But when you’re in that league, the way people are talking, it sounds like everyone who’s doing what they’re supposed to be doing is this close to having an NBA career. That’s not true. There’s a lot of false hope.”

Each team in the D-League can seem like an amalgam of mismatched interests. Coaches advance their careers by winning. Players get noticed by putting up numbers, wins and losses be damned. “It’s hard to balance,” Peck said. “The only thing I can say to the guys is, ‘We all look better when we win.’ And that’s true. So as a team, we have to make decisions that put us in a position to win. But at the same time, you can be successful in this league without winning. If we lose every game, but we get seven guys called up to the NBA, that’s still a success. Even though it’s tough to swallow, we’ve accomplished the objective of our league.”

Playing overseas brings its own set of challenges — language barriers, unreliable owners, and for many Americans, expectations from host teams to post impossibly gaudy numbers — but there can be freedom in the knowledge that the NBA is a world away. Instead of gunning for a 10-day contract to lift them away from spitting distance of the poverty line, overseas pros make a comfortable living. And with the NBA no longer an imminent possibility, players can shift their focus to the more traditional basketball goal of helping their teams win. “It took a long time for me to learn that no matter what I did, the NBA wasn’t calling,” Fazekas said. “A lot of guys still haven’t learned it. But once I did learn it, and once I found a situation overseas that I really enjoyed, I was much better off.”

There’s plenty of time for Pierre Jackson to emerge as the D-League’s next great success story and someday be featured on infographics alongside fellow alums like Jeremy Lin and Chuck Hayes. But if he doesn’t — if he bounces back and forth between the D-League and the foreign leagues, perhaps with a couple of 10-day NBA stints in between — then he’ll join Fazekas and others on the list of players who lit up NBA’s minor league without ever earning the payoff they thought would come.

“There are still a lot of nights I spend lying awake wondering why I never got a shot,” Fazekas said. “So many times I worked out for teams and played well. So many summers when I heard GMs say I was going to have a long NBA career. Even here in Japan, I have people ask me all the time, ‘Why aren’t you in the NBA?’ I don’t know what to say. I just tell them I’m happy where I am. I score a bunch of points. I rebound a lot of balls. I can’t worry about the NBA. The NBA kicked me to the curb.”

Saying the Word the NFL Doesn’t Want to Hear

"Tough, tough. That’s why they call him ‘Tuff Juice,’ I guess. He just plays hard."