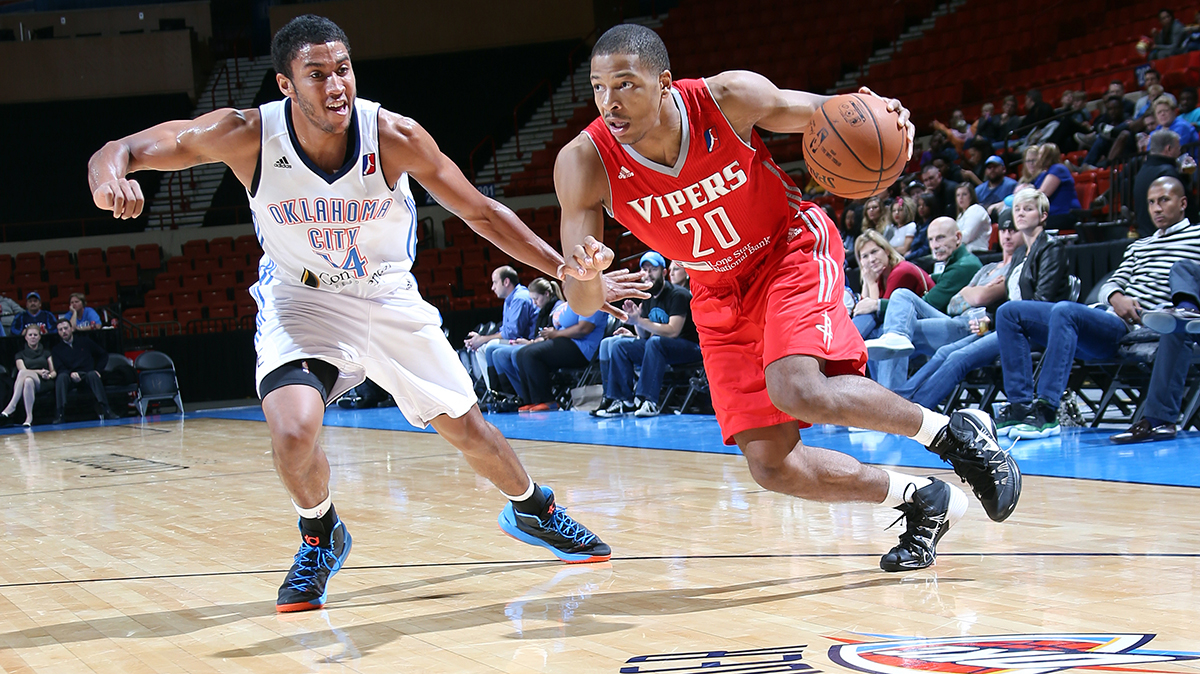 With its new television deals and record franchise valuations for teams in all markets, the NBA has entered an era of incredible financial prosperity. As the league rakes in billions of dollars, franchises are increasingly willing to pay millions more in luxury tax, as well as to employ sports psychologists, massage therapists, shooting doctors, video coordinators, data crunchers — anything to gain a competitive edge. Salaries of coaches, trainers, and front-office personnel have never been higher; many teams have nearly as many coaches as players. With the business booming by all accounts, why would the NBA continue to ignore its own development league?

It’s not like the league lacks innovative leadership right now. Commissioner Adam Silver and Players Association executive director Michele Roberts have proven to be progressive thinkers who are open to new ideas. They know the world of college sports has been upended by litigation — not just Ed O’Bannon’s antitrust suit against the NCAA, but the Northwestern University athlete unionization case as well. If the amateur landscape is being reshaped, then why wait to follow the NCAA’s lead? The NBA should act preemptively in what, down the line, will be in its own best interests. The NCAA would then be obliged to adapt some of its more draconian rules to the 21st-century game, making the system more balanced and player-friendly. At the moment, the NBA is abetting the NCAA. It should be the other way around.

Player development remains the NBA’s biggest weakness. Rather than nurture so-called homegrown talent, the NBA outsources nearly all of its minor leagues to college basketball and Europe. In theory, the NBA’s own Development League was designed to function as a sort of R&D lab for players too green for showtime. That’s not how it played out. The D-League became the League of Last Resort for players who failed to make any NBA roster. These players don’t mind getting paid less than what they’d likely earn overseas. But the continued existence of this holding pen underscores the fact that the system is outmoded, inefficient, and flagrantly unfair.

The D-League rebranded itself and made its first major expansion in 2005, the same year the NBA and the players union agreed upon an age minimum of 19 years and one year removed from high school graduation. Any player who skips college is eligible to sign with a D-League team. But the league’s salaries range from $13,000 to $25,500 — barely a livable wage — which partly explains why no prospect would ever voluntarily choose the D-League over college.

Over the last two years, 40 percent of the NBA’s second-round draft picks never actually signed NBA rookie contracts. Thirty-eight percent of those 60 players went overseas; only 8 percent wound up in the D-League. Since 2005, only four players have spent time in the D-League before their draft class became eligible: Mike Taylor, P.J. Hairston, Latavious Williams, and Glen Rice Jr. — all of whom were either stripped of their NCAA eligibility or kicked off their college teams.

With two years left before either side (owners or players) can opt out of pro basketball’s collective bargaining agreement, Roberts and Silver will undoubtedly build a solid working relationship that eases future CBA negotiations. The interests of prospects and their development should not be cast aside in the heat of those discussions. Now is the ideal time to address these issues. With shorter guaranteed deals and an escalating salary cap, as well as more teams hoarding cap space than ever, late first-round picks and second-round picks have evolved into some of the NBA’s safest and most cost-effective assets. And it’s not just about getting lucky with Chandler Parsons, Draymond Green, Isaiah Thomas, and Kyle Korver. In 2015 alone, Phoenix landed Brandan Wright for two second-round picks,1 and Tibor Pleiss (drafted no. 31 in 2010) became a major piece in Oklahoma City’s recent trade for Enes Kanter. If these picks are worth something, why don’t we care more about developing them?

The Thunder stashed Pleiss in Germany and Spain for the last five years, which raises another issue: Teams can draft a foreign prospect already under contract to a European team, then retain his rights without him affecting their salary cap. That foreign team effectively foots their development bill — no different from the NCAA and college players — an inexpensive stopgap that isn’t necessarily productive in the long run. So what if they can’t control the training those picks receive, or if it might be putting those players at a disadvantage? Teams would rather just stash those picks and hope they pan out later.

From a player agent’s perspective, Europe offers a bigger immediate payoff. Normally, agents don’t take commissions on D-League contracts and charge second-rounders 2 percent. In the European leagues, the standard 10 percent cut is generally split between the American and European agents. But the best agents help their clients get better in the hope that the improvement will result in a long-term NBA career. If your client is rewarded, you will be, too.

To be one of the 60 annual draftees should be an honor, not a burden. Yet it can be downright traumatic for a prospect to get selected late in the final round and then realize his new “team” has no intention of giving him a guarantee (and that he likely must play professionally out of the country). It’s in both the player’s and the league’s interests for him to mature on his own home turf.

During the second round, general managers often ask me the same question about any available prospect I represent: “Would they be willing to play in Europe?” Which goes to the heart of the problem: At that point in the draft, teams care less about taking the best available player and more about holding on to a player’s rights. This puts American players at a disadvantage and explains why low second-round picks tend to be Europeans or Americans who’ll agree to play in Europe.

If we reorganized the D-League and made it stronger, maybe these players (and their teams) would have more options. That’s why I am proposing the NBA roll back its minimum age requirement (from 19 to 18) and allow high school standouts to become eligible for the draft again. Within that plan, I am including the following caveats and incentives:

• No prospect would be required to declare, making everyone eligible, much like baseball’s amateur draft. Prospective picks would be asked to sign a “memorandum of understanding” as a condition for consideration, whereby they would agree to forgo college if drafted. If they declined to sign, they would effectively be choosing college over pro ball and couldn’t be drafted for two more years. If they declare but never get drafted, they should be allowed to retain their eligibility and attend school. Currently, they aren’t. The crucial point here: Players shouldn’t be penalized for an ill-informed decision. Draftees should be given the option of signing in the NBA, going to the minors, or playing overseas.

• All early-entry players would be given the same declaration date. Right now, foreign prospects get almost two months more than their American counterparts to decide whether to remain in that year’s draft.2 By locking everyone into the same date, the NBA would rectify one of the great competitive inequities of pro hoops.

• All first-round picks would be paid NBA rookie scale regardless of whether they played on the parent or farm team. To encourage a franchise to sign a first-rounder and farm him out for more seasoning, the team should get a year of cap relief. That would prevent any team from doing what the Thunder did to Josh Huestis, who was drafted at no. 29 overall only after he agreed to spend his rookie year in the D-League (and be paid accordingly).

• Today’s second-round draftees have no salary protection. Teams can decide against signing them and still retain their rights. An NBA team is required only to offer a minimum non-guaranteed contract; that’s it. Under my plan, teams would be required to offer second-rounders a guaranteed minimum split3 contract ($253,500) or forfeit their rights. Teams could still negotiate multiyear contracts with players; they’d also have the right to send those prospects to the minors without their salaries counting against the cap for two years. This would encourage NBA franchises to draft the best available players in Round 2 and develop them. For free agents or players who have been released, the minimum D-League salary would be raised to a more livable $50,000, a figure more commensurate with their relative contributions.

So what would be the biggest benefit from my proposal? In my opinion, cap management should be independent of player development. Let’s say an NBA team could spend up to $2 million a year on D-League player pay (not counting the salaries of first-rounders); if that number didn’t count against the actual cap, the team would be more likely to take chances with development. Right now, the 18 current D-League franchises are said to be worth around $5 million each. If the NBA created 12 more teams, each parent franchise could have its own affiliate.

Wouldn’t the value of those teams keep increasing if more future NBA players were starting their pro careers there? Wouldn’t fans feel more of a connection to those teams? Wouldn’t they generate more ticket revenue? Could the influx of talent make the D-League as competitive as the top European leagues? Could it open the door for competition between the D-League and Europe, as well as a more attractive product to sell to TV?

The NBA and its union already have excellent life-skills programs in place to assist players on and off the court as they transition into the NBA. The same could happen for D-League players — they could complete an NBA prep curriculum that includes courses on everything from personal finance to media training, and receive grants to cover job training or college tuition on their own time (much like Major League Baseball provides). Legitimate prospects who want to forgo college should have a meaningful Stateside alternative and not be compelled to play overseas, like Brandon Jennings and Emmanuel Mudiay did. We could even establish a mentorship program that pairs them with current and former NBA players. And if the league develops a few late-blooming stars, that only means the next generation of D-Leaguers will have a clear path to follow and emulate.

I hope that Roberts and Silver seize the opportunity to fix this problem. And it is a problem. You don’t need to uproot college basketball to create a better farm system. The pieces are sitting there. The time is right to develop a legitimate minor league that protects younger players, nurtures and cultivates future stars, and works in the NBA’s best interests.

Hanging It Up: Retirement Is the Latest NFL Trend

We Have to Go Back! Revis Returns to the Jets, the Colts Go All In, and More NFL Free-Agency Moves