No Country for Old Men: Melvin Ely and the Reclamation Projects of the Texas Legends 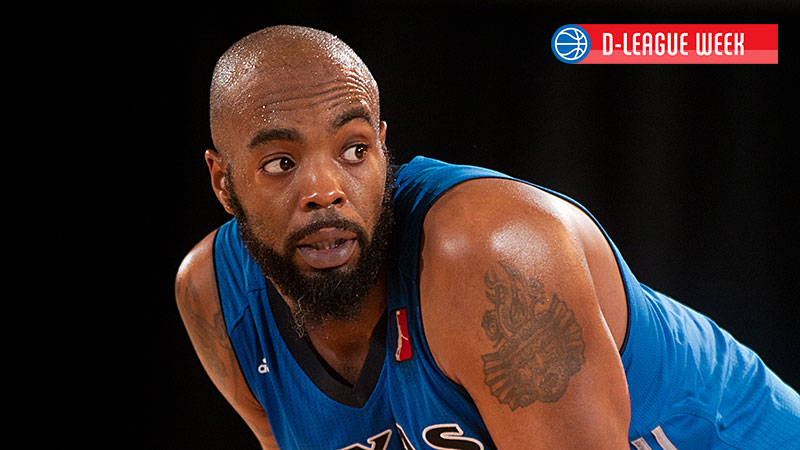 I’d like to believe that, two weeks ago, in the locker room of New Orleans’s Ernest N. Morial Convention Center, Texas Legends big man Melvin Ely looked in the mirror just before the 2014 NBA D-League All-Star Game and was struck with déjà vu. The red jersey with white trim, the “33” placed front and center, the corporate branding on his uniform — he’d been adorned in a comparable getup 17 years earlier. Instead of the traditional East versus West, the D-League All-Star Game pits the “Futures” against the “Prospects,” and Ely, in spite of his 35 years, was representing the Prospects. In basketball terms, Ely hasn’t been a prospect in more than a decade. But in 1997, wearing a similar red uniform as a McDonald’s All American, he was one of the best and brightest.

Ely is the oldest active player in the D-League, as well as the oldest D-League All-Star. He’s something of an anomaly. While many aging NBA veterans have passed through the D-League to audition (and condition) for one last crack at the NBA, the “developmental” league trends toward young talent. After all, the D-League is an ongoing, continuously shifting set of experiments that require youthful subjects who still have the potential to be the change they want to see in the game. But not every D-League team wishes to upend tradition by hoisting 50 3-pointers a game like the Rio Grande Valley Vipers. Some D-League experiments, like the one held in Frisco, Texas, are conducted simply by keeping an open mind and embracing untapped resources.

The Texas Legends’ personnel list is so full of notables, it could be a Jeopardy! category. Ely is the oldest active player and All-Star. Greg Ostertag, who was 38 in 2012, was the oldest D-League player ever. At 7-foot-8, Paul Sturgess is the tallest basketball player in the world. Their front office is even more impressive: Part-owner, general manager, and head coach Eduardo Najera (a former Dallas Maverick, if you recall) is the first Mexican head coach under the NBA umbrella. Nancy Lieberman, who serves as an assistant GM, was the Legends’ first head coach and the first woman to coach a men’s professional basketball team. President of basketball operations Spud Webb helped blaze a trail for players under six feet tall in the ’80s and ’90s.

“Front office,” in this case, is used nominally. None of the Legends’ basketball operations staff actually has office space. Legends senior vice-president Malcolm Farmer laughed when I brought up what I’d heard about executives like Lieberman, Webb, and vice-president Del Harris not having offices. “Yeah, I don’t have an office either,” Farmer said. “I don’t think having office space is really all that critical.”

Executives like Lieberman and Harris are part-time employees. Lieberman is an analyst on Oklahoma City Thunder broadcasts and can be seen taking out a whiteboard and breaking down plays during halftime shows. Harris, when not in Frisco, can be found all over the globe. When I tried to get in touch with him earlier in the week, he was in Delhi, India, to speak at several conferences and the launch of the country’s national basketball tournament. Not content to leave me empty-handed, he sent over an email for a free health assessment that would help determine the vitamin supplements I ought to be taking. Del Harris cares about my health more than I do.

Harris might’ve also been a factor in Ely’s career resurgence over the past year. A two-month spell of inactivity in 2013 caused Ely to gain a bit of weight on a frame that had already packed on more than enough. Ely rededicated himself to the weight room, changed his diet (he now eats about eight portioned meals a day), and has sculpted himself back down to 245 pounds, a weight he hadn’t played at since his early days in the NBA. “[The Legends] were actually the ones that started me losing weight to begin with,” Ely said in December. In 33 games, he has averaged 16.2 points in less than 30 minutes a game, shooting nearly 60 percent from the field. He’s put in the work, but time will tell if it’s too late for him in today’s NBA. “To be honest, you can look at him and say, ‘Well, he’s not a prospect,’” Farmer said. “With that being said, he is a prospect in terms of NBA teams looking at him and having a chance to get called up at any point in time. He’s definitely that, given the scouts and the people who have asked about him.”

“Look, I know better than anybody,” Lieberman said. “I played in the WNBA at 39 years old, and at 50. So we don’t want to discriminate. We want to highlight who people are, regardless of their age.”

Ely is only the most recent reclamation project for the Legends. The four-year love affair with aging vets on the comeback trail started in 2010-11, their inaugural season, when a 35-year-old Antonio Daniels signed with the team to get back in game shape after sitting out an entire season with a knee injury. Daniels was excellent in his time with the Legends. “He cared deeply about his teammates and about winning and how to work, and he just brought a tremendous work ethic to our team before we even got into the practice gym with our players,” said Lieberman, who coached Daniels that season. The D-League’s primary emphasis on player development can warp and decontextualize the act of winning and losing, and the Legends have discovered early on how important veteran players are to reinstalling a team spirit.

It was an environment they felt would be beneficial for P.J. Hairston, a 21-year-old potential first-round draft pick who left the University of North Carolina this season after becoming entangled in NCAA violations. The Legends, conveniently atop the D-League’s waiver wire at the time, picked up the coveted swingman three weeks after Carolina decided not to reinstate him in late December. In Hairston, the Legends acquired a player in need of veteran guidance, and he would get it immediately. “P.J. is obviously a younger guy,” Farmer said. “Does it make sense for him to be surrounded by a bunch of — and I don’t mean this in a bad way at all — 22-, 23-, 24-year-olds? Or is there value in having a couple of older guys on a team who can help transition some younger guys, even guys who’ve finished their college career? There’s a transition process to being a professional.”

Hairston, 21, was only 14 when Ely won a championship with the San Antonio Spurs in 2007. In his second game in the D-League, Hairston scored 40 points. Five nights later, he scored 45. The Legends’ bet has paid off.

“I just think [Legends co-owner] Donnie [Nelson] saw him and said, ‘Either P.J. is going to stay at home and work on his game and get into a gym and have to create his own training environment,’” Lieberman said, “‘or we can take the young guy and put him in an NBA setting with NBA verbiage and pro coaching, and put him with a guy like Eduardo Najera, and prepare him for the next phase of his career, which is the draft.’ That’s exactly what Donnie did.”

The Mavericks assigned Jae Crowder, Bernard James, and Shane Larkin to the Legends for Thursday’s game against the Los Angeles D-Fenders. This was presumably to supply the Legends with enough of a talent surplus to break a 10-game losing streak that has spanned nearly the entire month of February. There was an influx in YouTube viewers last night — many Lakers fans tuned in to catch a glimpse of Xavier Henry in his first bit of game action since late 2013; Mavs fans came to see Larkin. Ely sat the night out, because if that Prospects uniform he donned at the All-Star Game had him feeling his age, then last night’s unsightly camouflage uniforms with bright red trim might have left him in a walker. He watched the three players sent from the Mavs bring mayhem down on the D-Fenders. James finished with 38 points and 18 rebounds. Crowder had 23-18-10. The Legends won 121-103. Mission accomplished.

In my conversations with Farmer and Lieberman, there was a lot of talk of “what the D-League is all about.” It’s an audition, a focus group, a way to explore what might still be possible. At halftime, Legends president Bill Boyce emerged from a giant box and started dancing (flailing?) to Ylvis’s inescapable “The Fox,” surrounded by frenzied fans. Lieberman had told me about the excitement of Legends games, how the Legends have been trendsetters in the D-League not only in how they play the game, but also in how they entertain during games. This wasn’t at all what I expected, but maybe that’s the point. In a strange, alternate NBA universe, maybe all team presidents get in boxes and dance for the fans. Maybe that’s a reality still on the horizon. For now, you’ll only find it in Frisco, where it’s never too late.