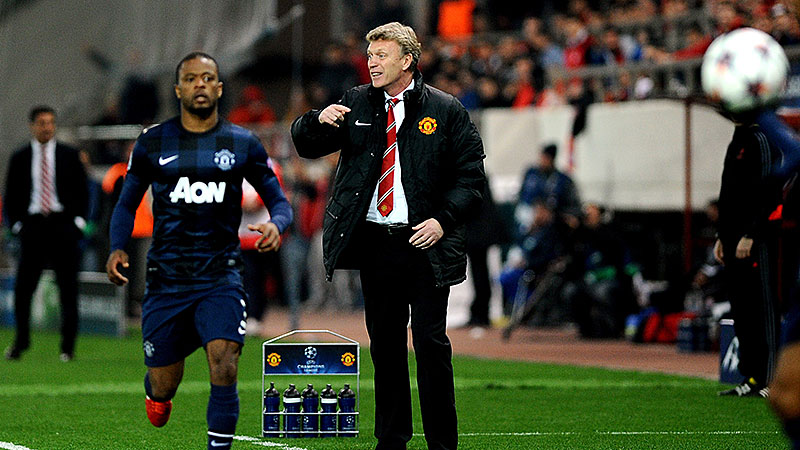 It’s hard to believe that only nine months ago David Moyes was considered the safe choice for Manchester United. The handpicked heir apparent to Sir Alex Ferguson, Moyes was the one who wouldn’t rock the boat at Old Trafford, as compared with more flashy alternatives like Jose Mourinho. Maybe Moyes wouldn’t take the team to quite the same heights as another manager, but when he succeeded, it would be for the long haul, a manager who could be there for a generation, just like his predecessor.

Almost three-quarters of a season later, that idea of manager for a generation seems laughable. Heck, after an incredibly dreary loss to Olympiakos in the Champions League, Moyes even finishing the season seems optimistic. As we enter the stretch run of his inaugural (and perhaps only) season at Manchester United, the question is, what’s gone wrong with the David Moyes hiring? And can it be fixed?

Why Moyes in the First Place?

The appeal of Moyes was that he was fairly similar to Ferguson in the way they approached the job of management. For 27 years, Ferguson was the only voice that mattered at Manchester United. His retirement left a hole at the top of an organizational tree. Moyes was the rare candidate who could fill that hole. For a decade, he had succeeded in a similar position at Everton. From transfers to tactics, fitness to the youth academy, Everton was his team. From that perspective, he was an excellent candidate.

The one bright spot of this dismal season has been the way Moyes has begun to remake the club behind the scenes. He’s modernizing the structure, changing the scouting system, and is generally installing his vision of what the organization of Manchester United should look like.

That Moyes was dramatically different than Ferguson on the field was an afterthought almost not worth mentioning. The problem of Moyes adapting his tactics, or having the team adapt to him, would be secondary. After all, he’d be at Manchester United; he would be flush with money and talent. What could possibly go wrong?

Ferguson’s later years were defined by a chameleon-like tactical genius. Trying to think of a defining Manchester United style over the last half-decade is a bit like playing Whac-a-Mole. Hit on one concept and another popped up two games later. Sir Alex mixed and matched from an outsize squad, amplifying his players’ strengths and minimizing their weaknesses. He shielded players like defender Nemanja Vidic from situations which would expose that he’d lost the last vestiges of his minimal pace. Shinji Kagawa got to play in games where he could exploit the time he had on the ball, and not suffer through ones that would expose that he struggled creating that time for himself. Wayne Rooney was deployed as needed in every position across the front six. Ferguson’s singular genius covered for a squad that was not nearly as good as it looked.

At Everton, Moyes was the exact opposite. He had a smaller squad and a defined style. That style emphasized wing play and marginalized the middle of the field. The striker was asked to finish. The player in the behind-the-striker’s role was to move toward the wing and combine with a midfielder and fullback. The central midfielders were asked primarily to keep the defensive shape and move the ball from flank to flank. It makes sense. Everton was a cash-strapped team, and the approach marginalized possibly the three most expensive positions to fill: striker, creative midfielder, and deep-lying playmaker. There’s nothing wrong with playing this way, but it’s about as far from Ferguson as you can get.

Beyond the tactics, there’s the issue of Moyes’s lack of experience dealing with big-name players. One of the most incredible things about Ferguson was his ability to be the sole commanding voice in a club full of stars. There is no shortage of examples of players who crossed Ferguson and lost (Roy Keane), stars who were shipped out when Ferguson decided it was their time to go (David Beckham, Jaap Stam), and players deemed irreplaceable shortly before being replaced (Cristiano Ronaldo). Dealing with star players was never part of Moyes’s responsibilities at Everton. He couldn’t afford them.

What we’re finding out this season is that Moyes as tactician should have been valued as Moyes as club leader. It was apparent early on this season that Moyes had no intention of changing his approach. And game by game it’s become abundantly clear that this United squad is incredibly ill-suited to the way their new manager wants to play. Replace a manager who is a genius at hiding his squad’s weaknesses with another hell-bent on playing a style that exacerbates those shortcomings, and an overachieving title-defending side turns into an underachieving one all but certain to miss out on the Champions League.

There are two arguments that are trotted out to support keeping Moyes around despite this year’s results. The first is that he simply hasn’t been given enough time. After all, Ferguson struggled through several years of uneven performances after taking over the club in 1986, the argument goes, and look how well that turned out. The major problem with that argument, of course, is that it fundamentally ignores how the game has changed over the past 27 years. United have financial muscle that give them advantages over almost all their competitors. But, as large as their revenue streams are, those streams are predicated on being a global brand, and being a global brand means competing in the Champions League year in and year out. Missing out on the competition costs money, notoriety, and prestige. It can all disappear very quickly. Just ask Liverpool, who are only now beginning to claw their way back from a fairly disastrous half-decade. Moyes does not have the luxury of finishing outside the top four for an extended period of time.

The second argument is that this year’s shortcomings are largely the fault of the players Moyes has at his disposal, and he should be given the chance to craft his roster. But this season’s poor results change what a United rebuild looks like.

United’s free fall has put the club on an accelerated timetable. They have to get much better this summer, and they have to do it quickly. So far they’ve extended Rooney, perhaps the only player who seems to be flourishing under Moyes, with a massive new contract, brought in Juan Mata, and been linked to just about every big-name central midfielder to lace up boots over the last two months. The logic seems simple. If Moyes is the manager, and he wants to play a certain way, then he needs the players to execute his vision. It seems that Moyes will have the freedom to go out and remake United in his image this summer. If the team wants to keep Moyes as its manager, that makes sense. But it remains unclear whether the team should want to keep Moyes at all.

Moyes has never had the freedom to spend before. He’s never had  to decide on the best transfer targets, as opposed to the most affordable. At Everton he brought stability first and results second (which is exactly what was needed). That’s what United thought it should prioritize as a coach. Nine months later and it’s clear those priorities have changed.

Which leaves United in a quandary. On the one hand, firing Moyes doesn’t really seem fair. One season isn’t enough time to judge him. He hasn’t gotten a chance to bring in his own players and get rid of the ones he doesn’t think are up to the task.

On the other hand, if Moyes didn’t already have the United job, it’d be hard to see him getting it in the current condition. What United need now is a manager with experience bringing in and synthesizing top-level talent in a short time span. And while we don’t know that Moyes can’t do that, we do know that he’s never done it before.

There’s going to be an incredible amount riding on next season for Manchester United. Nine months after appointing the conservative option in Moyes, it’s increasingly clear that the safest course of action is cutting ties. Allowing David Moyes to lead an emergency rebuild is a tremendous roll of the dice, and it would be a gamble that United really can’t afford to lose.

No Country for Old Men: Melvin Ely and the Reclamation Projects of the Texas Legends