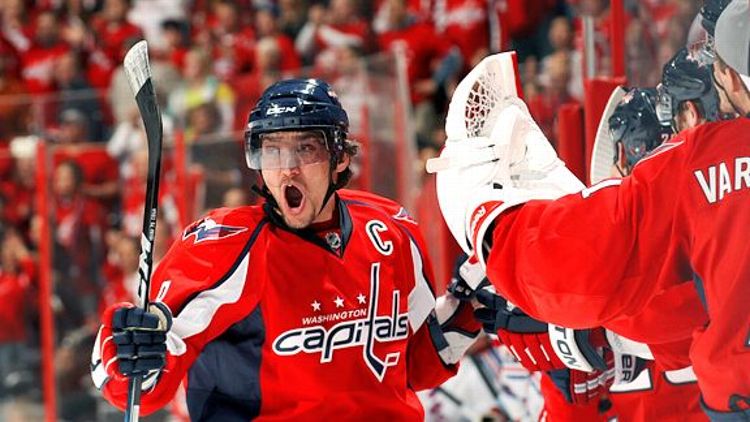 Hockey’s Three Stars of Comedy is a monthly feature that will recognize the three NHL personalities from around the league who produced the most comedic fodder for fans. It will appear every month during the regular season, unlike Eric Staal.

While he didn’t quite reach Stefan’s level, Smith came close against the Maple Leafs. Alone and just inches outside of the crease, Smith managed to not only miss the net but somehow fire the puck into the upper deck. He then went to the bench and delivered one of the best “Please take the camera off me so I can try to swallow my own tongue” looks of all time.

Oh, and special kudos to the guy who runs the spotlight and goal horn for finding a way to make a bad situation worse.

Alexander Ovechkin, Washington Capitals
Ovechkin started the month off by appearing to call his coach “fat” after being briefly benched, leading to speculation of a rift. In hindsight, Bruce Boudreau can look back on that moment as “one of the good old days.” After a month that saw them slip toward .500, thanks largely to a prolonged Ovechkin slump that had some wondering if he’d quit on his coach, the Caps fired Boudreau on Monday.

His replacement? Former Capitals captain Dale Hunter, a notoriously nasty power forward who is perhaps best remembered for doing this. Careful what you wish for, Alex. And maybe go easy on those goal celebrations in practice.

Brian Burke, Toronto Maple Leafs
Can you believe how little he had to give up to land Bobby Ryan? Wait, sorry, my mistake, this one was meant for the December edition.

Bryan Murray, Ottawa Senators
Toward the end of the first week of Sidney Crosby’s inspiring comeback from a career-threatening concussion, the Penguins beat the Senators, 6-3. The game featured a minor scuffle in front of the Pittsburgh net between Crosby and Ottawa’s Nick Foligno, which began with Foligno cartwheeling over Marc-Andre Fleury for no discernible reason and ended with Crosby throwing a half-hearted elbow.

Any other GM would have shrugged his shoulders and moved on. But not Murray, who recognized the moment for what it really was: an opportunity to engage in some Andy Kaufman-esque performance art.

Murray waited until his next chance to address the local media, then let loose with a seemingly pre-rehearsed diatribe. He accused Crosby of hypocrisy for championing a crackdown on headshots but then delivering one himself. In doing so, Murray crafted a brilliant parody of the whiny, self-absorbed critics of the NHL’s new rules.

“I thought he got a butt end, but it might have been a full elbow,” deadpanned Murray, before sarcastically drawing a comparison to the head injuries that the Penguins had lobbied against. “Of course, nobody could sincerely compare the sort of high-speed impacts that have been causing career-threatening concussions to a harmless tap from a stationary player, and it would be completely tone-deaf of me to choose this moment to try to score PR points against the game’s best player just a few days after his feel-good comeback,” he chose not to add, no doubt because it would have made his joke too obvious.

Sure, some viewed the rant as an example of a rebuilding team desperately trying to grasp at some small degree of relevance before the rest of the league went back to ignoring them. But that’s selling Murray short. He’s better than that. The whole thing was satire.

Please say it was satire.

Peter Laviolette, Philadelphia Flyers
Laviolette is the coach of the Flyers, and on Nov. 9, he found himself with a dilemma. Philadelphia was facing Tampa Bay, and the Lightning would be using their patented 1-3-1 defensive system. (They use the 1-3-1 in an effort to prevent the other team from taking a shot on goaltender Dwayne Roloson, at which point the puck would immediately go directly into the net while Roloson told it a story about what it was like to break into the league in early ’50s.)

The 1-3-1 typically sees only one forward forechecking, with three teammates lined up across the neutral zone while one hangs back even deeper. That system would be boring enough, but the Lightning added a new wrinkle: the “forechecker” wouldn’t so much forecheck as just passively wait for the defenseman to start advancing the puck.

All of which works great, as long as the other team does indeed try to advance the puck. Which the Flyers did not. The result was a bizarre scene in which, literally, nothing happened. One player stood still with the puck, while everyone else skate in little circles waiting for something to happen.

Or, as long-time hockey fans would recognize it, “When you come back from the fridge with a beer and realize you forgot to pause NHL 95.”

Milan Lucic, Boston Bruins
Quick confession: I love goalie hits. Always have. I love the momentary gasp of the crowd as they realize one is about to happen. I love the inevitable physics-defying reaction of the goaltender. I love the moment when the offending player realizes that all hell is going to break loose in about two seconds (which for some reason always reminded me of this). And I loved the brawls that followed, 90 percent of which have historically featured an out-of-control Craig Berube, even if he wasn’t playing in the game.

So when Milan Lucic decided to steamroll Ryan Miller for no particular reason, I was on board.

(One quick aside here: While Lucic’s flagrant hit was the obvious highlight of the play, not enough credit is being given to Miller for his reaction. Yes, he does execute the traditional midair cartwheel. But he also has the presence of mind to manage a vicious one-handed slash aimed at Lucic’s ankles before he’s even stopped spinning. That’s impressive.)

Now it goes without saying that the hit alone couldn’t be the end of it. Hockey has a code, and that code has a section dealing with seeing your star goaltender get run. The first page of that code reads simply “Jump the guy right away,” but the Sabres lost that page. The second page reads “No, seriously, go jump that guy right now. Why are you all just staring at your skates?” But the Sabres spilled coffee on that one.

But the third page, apparently, reads “OK, at least think about doing something next game.” Which the Sabres did two weeks later, in the sense that getting repeatedly punched in the mouth by various Bruins is technically “doing something.” Miller hasn’t played since, and only returned to practice Wednesday. No word on whether the coaches took his suggestion that the first drill be “spinning slashes aimed at the ankles of your incompetent teammates.”

So congratulations, Milan Lucic. By managing the rare double-play of bulldozing an unsuspecting goaltender and causing the delayed emasculation of an entire franchise, you’ve earned this month’s first star.

Previously from Sean McIndoe
The NHL’s Three Stars of Comedy