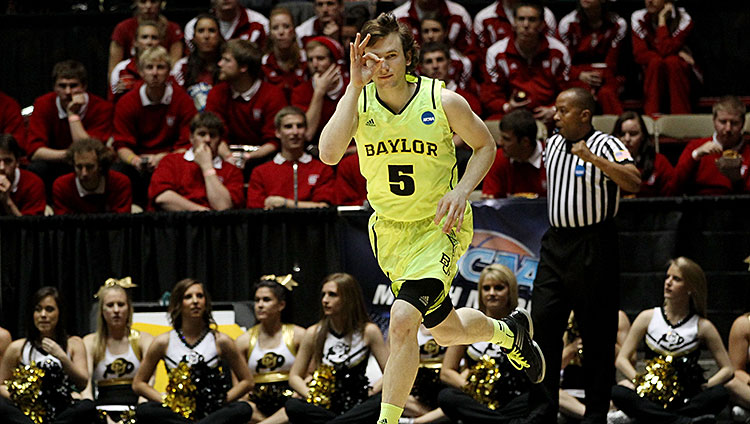 Earlier this week, Oakland’s Travis Bader broke J.J. Redick’s record for career 3-pointers made when he went 6-for-11 from downtown in a 22-point loss to Milwaukee. Bader deserves his reputation as a sniper, but he also has moments when he’s more of a shooter than a maker. He’s had 0-8, 0-9, and 0-10 games from beyond the arc, and he has attempted fewer than 10 threes in only six games this season. Nonetheless, any list of the best shooters in America is incomplete without Bader, if for no other reason than he hit 10 threes against Cleveland State on Thursday night and it wasn’t a career high.

Inspired by Bader’s record-breaking career, this week the Triangle All-Stars will honor the best spot-up shooters in America (who aren’t Travis Bader).

My criteria for this list are simple: When the ball gets kicked out to a wide-open shooter, these are the guys who would make me feel like I was witnessing history if they missed. This isn’t meant to be a list of guys I want taking clutch shots, guys who can shoot off the dribble, guys who can curl off screens and knock down shots with a hand in their face, or anything else that isn’t wide open, spot-up shooting. 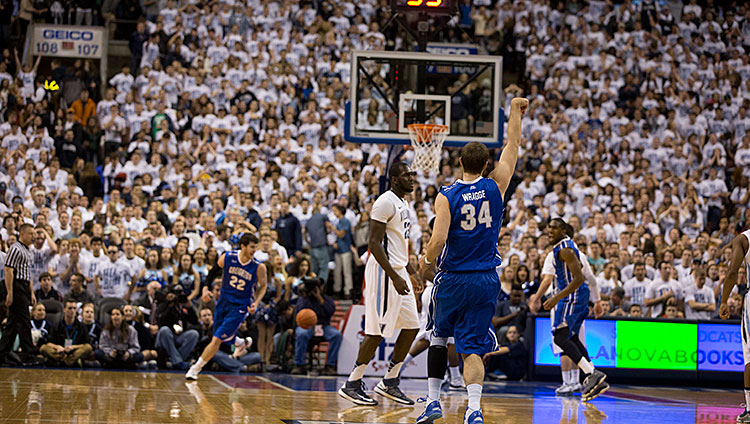 Wragge’s magnum opus will always be his first-half onslaught at Villanova in January, when he hit eight 3s and pretty much single-handedly ended the game before anyone else had even worked up a sweat. But the legacy of #WraggeBombs is more than just a one-night show. Wragge has been great from deep all season — he averages 3.7 made 3-pointers per game. What makes Wragge the captain of the Spot-up Shooting All-Stars is that he hits 49.7 percent of his 3-point attempts, which is insane given how many he puts up. Consider this: Wragge has made 78 3-pointers this season, good enough for seventh in college basketball. Nobody ahead of him is shooting anywhere close to his percentage, and the first person on the list who is shooting a better percentage is American University’s Jesse Reed, who has made 43 3-pointers. 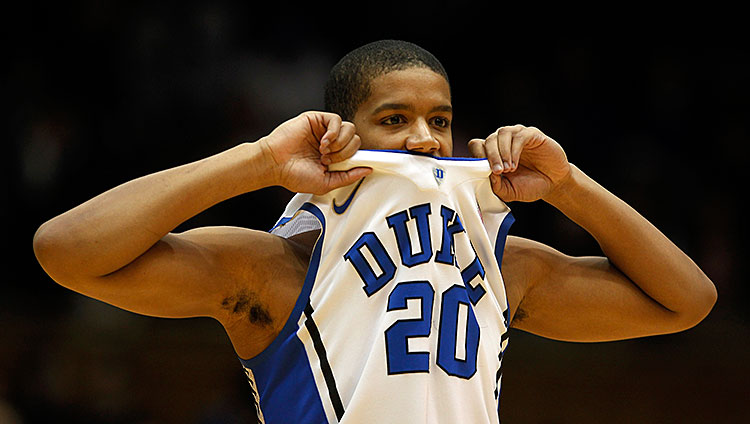 After a hiatus from basketball last year to cope with the death of his sister, Dawkins took awhile to heat up this season. But now that he’s found his stroke, he might be the best shooter in the game. I’m not sure if such a statistic is tracked, but I’d bet my middle nut that Dawkins is the most efficient 3-point shooter in America by a wide margin. He hits a 3 every six minutes he’s on the court this season, which blows guys like Wragge (every seven minutes) and Bader (every eight and a half minutes) out of the water. Given that the Blue Devils are 40-3 in his career when he scores 10-plus points and 8-0 when he scores 20-plus, it’s a wonder Coach K doesn’t just play Dawkins 40 minutes, feed him the rock all day, and then sit back and watch the blowouts unfold. 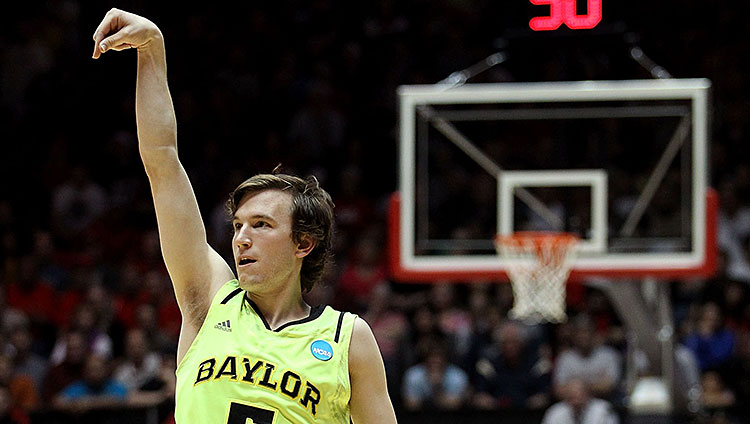 When you think of Canadians who part their hair, ferociously chew gum, and throw up loose butthole monocles so often it seems like they’re getting paid for them, who comes to mind? Keanu Reeves? That guy from Sum 41? Of course not. It’s Brady Heslip, who has finally blossomed into the sharpshooter Baylor fans always hoped he’d become. To be fair, Heslip had moments of brilliance during his first two seasons in Waco. He hit six 3s in a game against BYU in the 2012 season and hit eight in an NIT game against Long Beach State last season. But when you look at his game logs from those years, the great games stick out because he had many subpar shooting nights. This season, though, Heslip has been consistently making it rain, so the outlier games that jump off the page are his 0-5 performance against Texas Tech and his 0-4 night against Texas. Heslip is shooting 46.8 percent from the 3-point line and he’s averaging three made 3s a game, so even though Baylor has been a disappointment, it’s hard to blame Heslip. 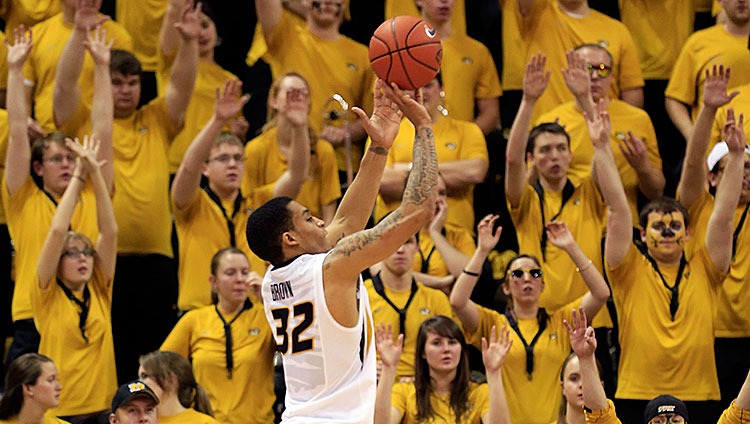 Unlike the other guys on this list, Brown is a scorer first and a shooter second. He’d still be Missouri’s best player if the 3-point line didn’t exist — but it does exist, and Brown is that much better for it. Despite being the SEC’s leading scorer and therefore the focal point of opponents’ defensive schemes, Brown is shooting 47 percent from the 3-point line and he hasn’t had much of an off night all season. That second part is remarkable. Anybody who has ever played basketball knows that off nights are inevitable. Big things like defenses having your number or dealing with a nagging injury, or little factors like the lighting of the gym or the feel of the ball all come into play each and every night. Any one of those going wrong can cause a shooter to have an off night. Yet Brown continues to defy the basketball gods: His worst 3-point shooting performance of the season was a 2-for-8 effort against UCLA, and he still finished the game with 22 points. 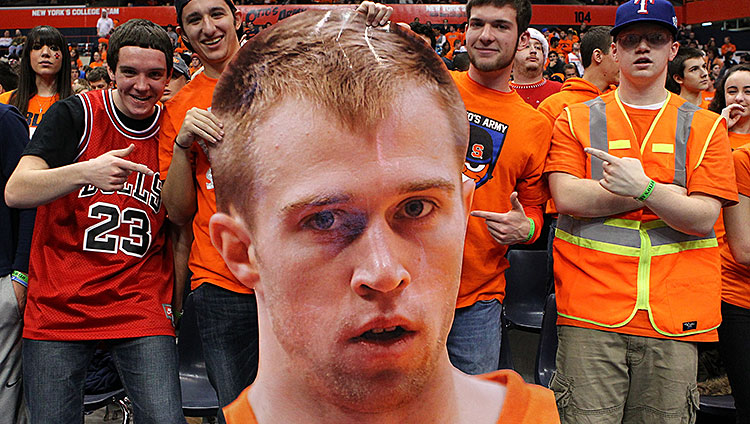 Thanks to a 9-for-12 night against Notre Dame on Monday that led to a career-high 33 points, Cooney just squeaked past Oklahoma State’s Phil Forte for the final spot on this honor roll. Depending on which Syracuse games you’ve watched this season, Cooney’s inclusion here is either way too generous or a slap in the face. He’s had two 2-for-12 games, he was 0-5 against Wake Forest last week, he was 0-4 against Fordham early in the season, and he’s twice gone 1-5. But he also went on a tear from the end of November to the end of December by hitting five 3s in six different games in that span, and he’s made 11 of his last 14 attempts from deep. Cooney’s streakiness makes it tough to determine how great of a shooter he is, but I’m giving him the benefit of the doubt because he’s one of the few guys in America who could miss 50 straight shots and opposing coaches would still tell their players not to give him any clean looks.