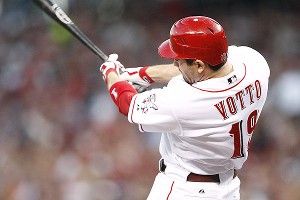 When the news broke that the Giants had signed Matt Cain to a five-year, $112.5 million contract extension a year before he could hit the free-agent market, the first thought that popped into my head was opportunity cost.

An economic term, opportunity cost refers to the options you’re missing by making a specific choice. If you choose to play outside in the sunshine, you’re missing out on hours of sitting on your ass in the dark, eating Pop-Tarts and playing Blades of Steel (stop nagging me, mom). If you sign Matt Cain to a $112.5 million contract, you’re missing out on other players you could sign with that money. In the case of the hitting-deprived Giants, you’re foregoing the chance to sign a hitter to help your anemic offense.

A few hours later, Joey Votto signed a 10-year, $225 million deal … two years before he could become a free agent. Then you look around at the talent likely to be available on the open market and realize: There’s very little left. And just like that, opportunity cost becomes nearly irrelevant.

Of the 30 most valuable players in baseball last year by Wins Above Replacement, eight could become free agents in two years or less, and five could become free agents at the end of this season. Dig a little deeper, though, and you’d find far fewer likely-to-be-available elite talents. Roy Halladay and Ben Zobrist could hit the open market after the 2013 season, but both have club options that will likely get picked up. Ian Kinsler, Curtis Granderson, and Dan Haren could theoretically be free agents after this season, but all three also carry team-friendly club options. The most likely scenario then would have just two of 2011’s top players — Shane Victorino and Mike Napoli — go up for bidding at the end of this year, and just four more, Kinsler, Granderson, Haren, and Jacoby Ellsbury, pop up after 2013. Given the aggressive rate at which teams have been locking up players before free agency, we might see half of those six players (or more) re-upped before they ever get to test free-agent waters.

Some teams, at least given their current revenue streams, won’t bother bidding when those names become available. But the number of holdouts is dwindling daily. The proliferation of monster TV contracts has expanded the list of willing bidders for elite free agents far beyond the Yankees/Red Sox tier. Even teams that lack such explosive media revenue potential are diving in: The Reds’ current TV contract runs through the end of the decade, pays a relatively modest $30 million a year, and doesn’t offer massive potential when it eventually runs out, given Cincinnati is the smallest television market in Major League Baseball. Yet if you include the next two years, when Votto was already under team control, the Reds have ostensibly handed him a 12-year contract — the longest deal the game has seen since the Royals doled out nebulous lifetime contracts to stars like George Brett and Dan Quisenberry in the 1980s.

The Votto and Cain deals both end months of speculation about their respective futures in Cincinnati and San Francisco. The Reds watched their chief NL Central rivals lose their own first base sluggers to free agency over the winter, realized Votto could command as much (or maybe more) than the $240 million Albert Pujols got and the $214 million given to Prince Fielder, and opted to act now rather than risk losing their guy. Meanwhile, the Giants won the World Series two years ago thanks to elite starting pitching, a loaded bullpen, some strong performances by unheralded veteran hitters, and Buster Posey. Signing Cain locks down one of the biggest pieces to that puzzle. Tim Lincecum, owed $40 million over the next two years before he becomes free agent-eligible, could be next. Emerging lefty Madison Bumgarner might not be far behind. When the alternatives are to pay exorbitant prices for over-30s not-quite-superstars like Victorino and Napoli, top the GDP of Palau to get Cole Hamels, or cross your fingers that another star might become available two or three years from now, the Reds and Giants opted for certainty and peace of mind instead.

The hard truths of supply and demand aside, both deals carry plenty of risk. Cain is as durable and reliable as any pitcher in the game, having tossed at least 32 starts and 200 innings in each of the past five seasons. But throwing a baseball is an inherently more volatile skill than hitting one, whether due to injury risk or the possibility of performance decline. Cain isn’t quite at the level of Halladay, Justin Verlander, and Clayton Kershaw either, with just one season above 4 WAR in his career (the most recent one). Assuming a market rate of about $5 million per win, the Giants are assuming a best-case scenario with Cain, where he’s roughly a 6-win pitcher starting in 2013.

As a power-hitting first baseman with diverse skills (hits for average, good defense), you could argue that Votto is a safer investment than Cain or most any other pitcher. But the Reds are assuming a worst-case scenario with Votto from a cost standpoint: That he’d put up MVP numbers for the next two seasons, and that he wouldn’t accept $225 million two years from now, or earlier. They’re also assuming he’ll be about a 7-win player starting in 2014, and will defy the aging process as he progresses deep into his 30s. These are certainly possible outcomes. But by tossing the fourth-biggest contract in baseball history at Votto now, they’ve assumed extra risk (waiting two years and hoping Votto doesn’t suffer a major injury or drop in performance), with little chance of reward from a value standpoint.

Of course, sweating potential value, opportunity cost, and other related principles might be focusing on the wrong details. The recent $2 billion Dodgers sale points to a baseball landscape that has changed dramatically. Current and prospective owners see an industry that grew revenue through a tough recession and now stands poised to rake in far more money, with media deals rising, the economy improving, and the game in the midst of its longest period of uninterrupted labor peace since the advent of free agency. When the Tigers threw $214 million at Fielder when it seemed like the market had softened considerably for him, it was that environment, and octogenarian owner Mike Ilitch’s overwhelming urge to win the World Series before he dies, that triggered the move. Moral hazard plays a big role here, too: If owners know they can always sell their teams for huge profits, and general managers know they probably won’t be around to see a 10-year deal (or even a five-year deal) all the way through, why not pay a premium to lock down a top player now?

We’ve seen what happens when people assume the value of their assets will go up forever. But hey, maybe this time will be different. The number of available major league teams, and of available elite players, is far smaller than the number of available homes 10 years ago or available tech stocks 12 years ago. So you can either fight fierce headwinds playing Moneyball with your roster every year … or give in and pay whatever it takes. The Giants, and especially the Reds, have chosen the latter.