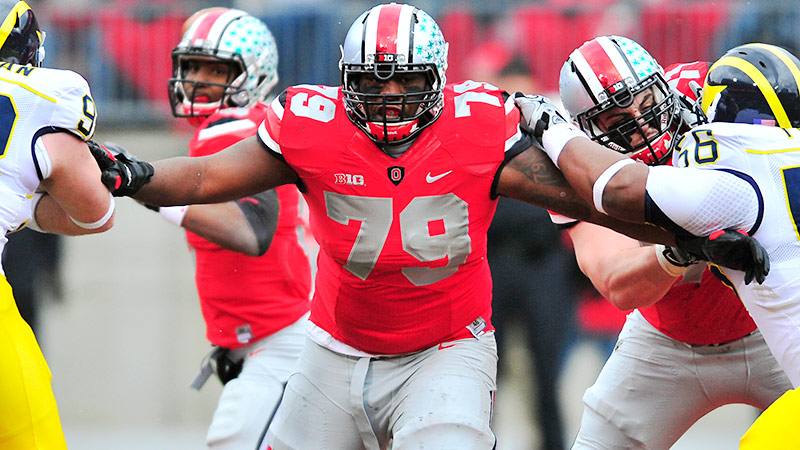 As college football players coast to coast graduate or see their eligibility otherwise expire, we on the NCAA beat must say good-bye and give them over to our NFL brethren. And in this time of transition, as writers and as fans, we feel it’s important that you know who you’re getting.

You are familiar by now with your Johnny Manziels, your Michael Sams, and your Teddy Bridgewaters, but entertainment value lurks from the first round to the ranks of the undrafted free agents, and we’re here to help you find it.

We hereby pass these players, their highlight reels, their media breakout moments, and their personalized theme songs on to you for your tender cherishing. Our top 10, in descending order of sure-to-be-missedness:

1. Ohio State OL Marcus Hall (UDFA, Colts): We’re just going to turn the floor over to Charles Pierce for a minute, because he was there: “[As] he was being led off into exile up the tunnel, Hall enthusiastically flipped off the Michigan crowd with both hands. […] I know I’m supposed to be outraged by this, but I can’t be. That would require me to be a TV drone and worry about things like The Image Of The Sport. Hell with that. Marcus Hall lived the dream of every Ohio State fan since the series began in 1897.” We’ve all been there. The team on the receiving end of our vulgar fantasias may or may not have been Michigan, but every one of us has either wanted to be Marcus Hall at one time or another, or industriously lied to ourselves.

2. Notre Dame DL Louis Nix III (Round 3, Texans): Nix was our personal selection for Athlete of the Year, after Pierce got to Hall first. We’ll pine for the former Irish star not entirely, but in large part, due to his borderline-romantic relationship with Kashi cereal …

… and also his quarterbacking prowess.

3. Oregon RB/WR De’Anthony Thomas (Round 4, Chiefs): Where to begin? With “HAD A VERY SUCCESSFUL CAMPING TRIP,” probably. DAT is like your dad crossed with a cheetah.

4. South Carolina QB Connor Shaw (UDFA, Browns): As near as the most knowledgeable scholars on the subject can determine, Shaw leaves Steve Spurrier’s care as the quarterback least openly despised by Steve Spurrier since those golden Danny Wuerffel years. Trust us, this means something. (Also, we cannot rule out the notion that Shaw might actually be Danny Wuerffel in a mask. Not yet.)

5. Texas A&M WR Mike Evans (Round 1, Bucs): Evans is one of those rare talents with a knack for making everybody around him (those in matching jerseys, anyway) look better on a frighteningly regular basis, chiefly Manziel.

6. LSU WR Odell Beckham Jr. (Round 1, Giants): As much as you like him as a receiver, you might like him even more as a return man.

Yes, it’s UAB, but that miss-and-slide at the 40 is still utterly unfair.

8. Florida State WR Kelvin Benjamin (Round 1, Panthers): He can move so fast relative to his size that it’s almost disconcerting to watch in person, as though your vision is being fast-forwarded. Charlotte fans are advised to keep one hand on a chair back or stair rail while watching Benjamin play to ward off fits of vertigo.

9. Eastern Illinois QB Jimmy Garoppolo (Round 2, Patriots): Garoppolo hails from Eastern Illinois, meaning we learned everything there is to know about him from YouTube. He benefited mightily from taking AJ McCarron’s place in the Senior Bowl, and while the future will tell whether Garoppolo will prove to be the heir apparent to Tom Brady on the field, he’s already lapping contenders in one crucial Pats-specific category: cheekbone measurables. 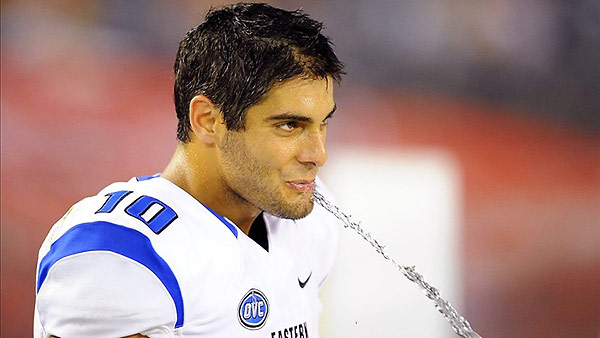 10. Auburn OT Greg Robinson (Round 1, Rams): There’s a certain novelty to cheering for somebody named “Greg Robinson” in a football setting.

HONORABLE MENTIONS, in alphabetical order: Dri Archer (Round 3, Steelers, can do this); Jeremy Gallon (Round 7, Patriots, prepared for hostile crowds after being called “a gallon of s____” at Purdue, of all places); Tyler Gaffney (Round 6, Panthers, Stanford player who gave up the game for baseball and returned after watching a Rose Bowl in street clothes); Ja’Wuan James (Round 1, Dolphins, provider of fiercely competitive but gigglesome looks into O-line life); Donte Moncrief (Round 3, Colts, see description-defying music video).