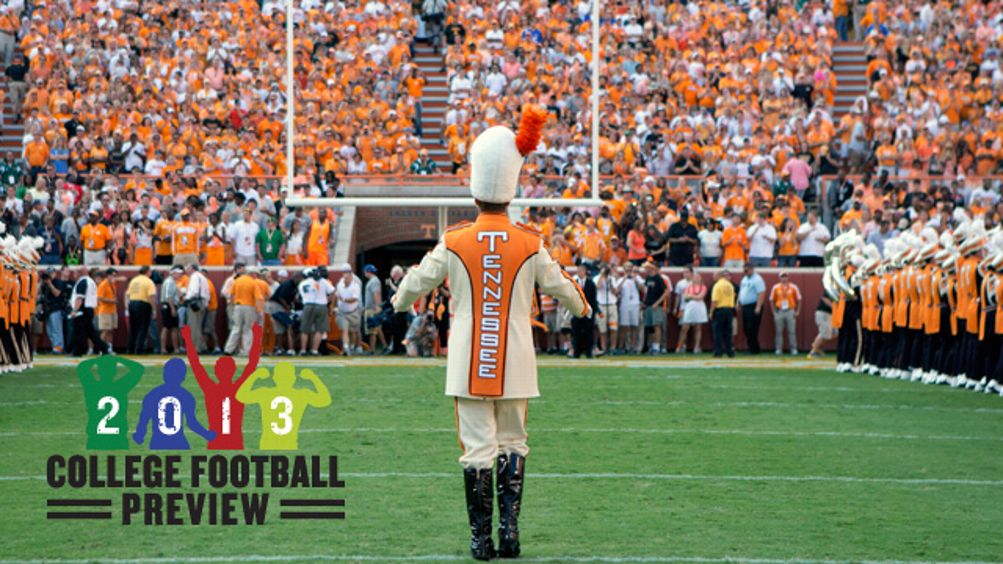 As the newest intrepid explorer to stand at the rim of the smoking crater of Tennessee football, Butch Jones has inherited a remarkable rebuilding job,1 on a number of levels. You have to be a company man to land this kind of gig, and he’s a good one, adept at working the Volunteers’ all-time conference rank in SEC victories (second), all-time national ranking in bowl appearances (tied for third), and other assorted Rocky Top mood elevators into speeches and casual conversation. But in the 14 years since the Vols took the first-ever BCS championship, the facts are these: The team hasn’t been back to a BCS bowl game since 2000. The Vols haven’t won a bowl game since 2008. They haven’t been to a bowl game since 2010. Only one team out of the past five finished with a winning record, and the past two years have seen two (2) conference victories recorded.

And lord-a-mercy, will 2013 ever be grim. Operating under a new staff, with a new starting quarterback and another scheme change on defense, Jones’s first Tennessee team faces this seven-week stretch beginning with Week 3: travel to AP preseason no. 3 Oregon, travel to no. 10 Florida, host no. 5 Georgia, host no. 6 South Carolina, and travel to no. 1 Alabama. All of this happens before November. Even if there’s a massive uptick in on-field production, how masked might this course correction be by the level of competition surrounding it?

So, we don’t pretend to know what we’ll be able to make of the nascent Jones era in Knoxville at season’s end, not even after living through it, not even as a native child of Rocky Top. All we’ll say is this, home folks: Remember just what it is you’ll be looking at in December, and ask yourselves if the future really looks burned-out and black, or whether it might just be Smokey Grey.

In years like this, you take your solace where you can find it. In Tennessee, that’s in the form of the five behemoths tasked with keeping SEC defenses on their heels. With four returning starters and a not-really-newcomer who has 14 career starts of his own, the Tennessee offensive line is one of the most experienced in the country and ranked fifth nationally in sacks allowed in 2012, best in the SEC. It’s a unit that was placed 80 percent formed into the laps of Jones and O-line coach Don Mahoney, consisting of left tackle Antonio “Tiny” Richardson, center James Stone, right guard Zach Fulton, and right tackle Ja’Wuan James. (Alex Bullard, who has played three offensive line positions in his two years at Tennessee, has been named the starter at left guard, replacing the Dolphins-drafted Dallas Thomas.)

It’s also a unit made up of players operating under their second head coach — third if you count guys recruited by Lane Kiffin — and third position coach. “We became leaders quick, I guess,” says James, “just from having to be.” The trauma has cauterized their bonds, and the line has a chemistry that is universally praised throughout the Tennessee football complex. “They’re extremely talented,” says Mahoney, recalling his first impressions of his charges, “and very smart. And close. They’ve been through a lot. There hasn’t been any stability for them. I know trust is built on time, and I had to make up for some lost time.”

The to-do list for the Vols O-line this offseason reads something like this: drop weight and speed up to adjust to Jones’s desired offensive tempo; learn the system; then put the rest of your offensive teammates on your back. Jones has high expectations of the team’s oldest unit: “We’re gonna have a first-year starter at quarterback, and some young receivers. So they’re gonna have to be a model of consistency. They have to bring continuity and stability to the offense, and to an entire team.” No big deal, big guys.

Being a head football coach in August, when every team of every caliber looks like hot buttered ass, Jones is difficult to please. He drops in on our interview with his linemen, and warns us not to praise them when they can hear it. Mahoney will cop to being impressed already. “I said this the other day, it’s kinda like Seinfeld right now. After each episode, there’s always one of them that just leaves you saying, man. Whether it’s Jerry, or George, or whoever. There’s always a guy, you look at him and go, Wow, I didn’t know he had that. And it’s good, because they all feed off each other.”

There may not be much cause to blare “Rocky Top” in 2013, but the line is a gift, albeit one with a rapidly approaching expiration date: With three true seniors, a redshirt senior, and Richardson draft-eligible, this time next year, Jones and Mahoney may be replacing every one of them. The players vow they’re not letting themselves think that far ahead. They’re a united front of one-game-at-a-time. They’re even talking alike. Here’s what you get when you ask them to list their individual goals for the season:

Stone: “We just want to focus on leading that offense.”

Richardson: “Individual accolades will come down the road. I mean, if you don’t play well, you’re not gonna get drafted.”

Mahoney already sounds wistful about next year’s draft in the middle of August. “I’ve enjoyed it because I know it’s going to come to an end. This is a talented bunch. I just want to enjoy this process.”

LT: Antonio “Tiny”2 Richardson, Jr., 6-6, 327, 12 career starts. Watching Tiny Richardson is like watching a movie monster; it’s unnatural for a guy this big to be this fast so early in his career. After missing spring ball, he’s finally giving his coaches a live look on the field. Jones: “Tiny is very prideful, he’s very competitive, and he’s a sponge. So he’s been great to build a relationship with.”

LG: Alex Bullard, R-Sr., 6-2, 302, 14 career starts. The Tennessee native transferred back to his home state from Notre Dame following the death of his father, and saw playing time at left guard, center, tight end, and right guard in 2011 and 2012. Bullard edged out Marcus Jackson for the position on the Vols’ fall camp depth chart. “It’s still really close,” says Mahoney, “but I think just focusing on one [position] has really helped him.”

C: James Stone, Sr., 6-3, 291, 27 career starts. After three years of play at center and right and left guard, he is now Mahoney’s appointed bell cow: “One night in practice, we didn’t have a very good night of execution as an offense. As an offensive lineman, it’s not easy to see where problems are on a given play, because they’re busy blocking. But I simply addressed James Stone, and I said, ‘You need to address this group and tell them we need to produce.’ He didn’t single out receivers, he didn’t single out a quarterback, he didn’t single out a running back. He said, ‘All of us.’ And he was right.”

RG: Zach Fulton, Sr., 6-5, 323, 28 career starts. Acclaimed by his teammates as both the best-looking player on the body change monitors (installed outside the weight room to show slideshows of each Vol, photographed in shorts in the winter, spring, and summer) and the most accomplished eater at the all-you-can-eat line,3 Fulton is also cited by several Tennessee staffers as the best bet for a long-term pro career. Like his teammates, Fulton is wary of any 2014 draft talk in 2013, but will modestly concede his Chinese buffet prowess: “I’ve been known to get up in there.”

RT: Ja’Wuan James, Sr., 6-6, 318, 37 career starts. The sleeper pick for best talker on the team has started every game in his time at Tennessee. That all those starts have come at right tackle is something of an accomplishment in itself, considering the upheaval elsewhere on the line earlier in his career.

• This is what happens when you ask these guys how they track their internal competitions. Stone: We got a chart up in our room.

James: I’m leading in every category.

Stone, Fulton, in unison: We’re all undefeated in pass rush.

• Big softies. Jones pumps a rotating series of noises into Tennessee football practices, but it’s not the canned crowd noise you might expect: rattling trains, breaking sheets of glass, and recorded car alarms echo around the practice field at nausea-inducing volumes. Then there’s a file of a wailing infant that seems to stretch on past the point of humane motivational tactics.4 James, Stone, and Fulton trip over each other to declare it the worst offender. Richardson: “I’m like, Coach, it sounds like somebody’s hurting these kids. It ain’t right.”

• Please restrict yourself to five plates of lo mein, gentlemen. “We got a new offense,” says James, “so we gotta be a lot faster. I think collectively, as an O-line, we’ve lost like 200 pounds.” Stone: “Basically, everybody had to drop some weight. We had to make some hard, tough decisions in the kitchen.” James: “I don’t eat past six o’clock. Or when I do, it’s a salad.” What kind of salad satisfies an offensive lineman? “Those big Zaxby’s salads!”5

Every team has an anthem. Tennessee isn’t the only program to deploy its fight song as a bioweapon.6 It does, however, boast the only fight song we know of that sets to music the disappearance of federal agents on a search for illegal moonshining operations.7

It also provides a built-in mythology for the Butch Jones era, should he succeed in Knoxville. We knew he was the guy, ‘counta he was a Bearcat first! Half bear, the other half cat! It’s simple biology, PAAAOWL!

• Required viewing: That gauntlet of top-10 teams kicks off early, with the Vols closing out a home-and-home series with Oregon on Saturday, September 14, in Eugene.