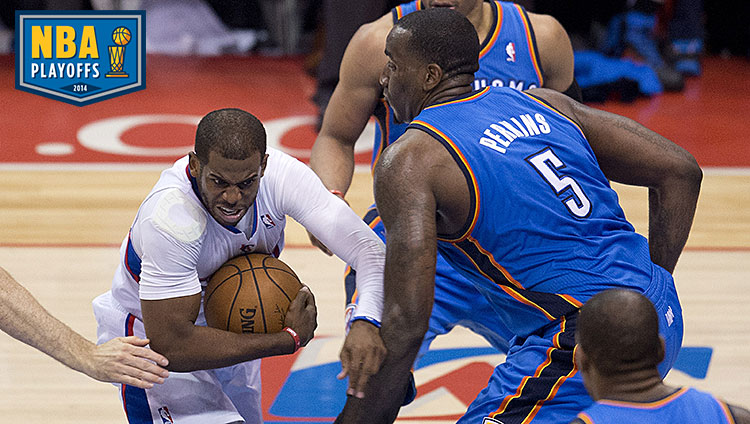 Donald Sterling went on CNN last night, ostensibly to tell his side of the story. What happened was predictable. He played the victim, claiming he’d made “one mistake in 35 years.” He couldn’t apologize to Magic Johnson without also insulting him more, and also managed to demean AIDS somehow, calling it “those AIDS.” He sounded exactly like the crackpot that we all know he is.

Meanwhile, his wife and her lawyers are on a media blitz of their own, hoping to win a PR war that will help her keep the team. Shelly Sterling sat down with Barbara Walters Sunday and vowed to fight for her stake in the team, ignoring guidelines in the NBA constitution that will likely make that impossible. Her lawyers disagree, of course, and after her husband went on CNN, Shelly went on the Today Show to say the NBA is sexist.

It’s all insufferable, mostly because it keeps this stupid story alive a little longer. They just won’t go away, and it distracts everyone from more important things in life. Like Chris Paul.

Chris Paul is so important right now. I spent a good portion of my weekend at Staples Center for Clippers-Thunder on Friday and Sunday, and that was my biggest lesson.

Before Game 4, there was all kinds of buzz about Donald Sterling’s CNN appearance and Shelly on Good Morning America, and then the game started. Kevin Durant and Russell Westbrook looked as good as they have all year. Serge Ibaka was dominating Blake Griffin so completely that it made you question Blake’s whole season. The “new” Clippers looked a lot like the old Clippers Sunday. Chris Paul was doing everything but still not quite enough, the perimeter guys were going cold at the wrong time, DeAndre was missing free throws, the crowd was dazed and depressed, and the bottom was falling out of the playoffs. Then … you know.

It turned into The Darren Collison game, brought to you by CP3. Paul carried the offense for three quarters, then took over Kevin Durant duty in the fourth, and forced turnovers that changed the whole game. Then Collison scored 12 points in the fourth quarter, and somehow a 17-point hole in the fourth turned into a two-point Clippers win.

Now we’re looking at a 2-2 series with some of the most exciting players on the planet.

There are plenty of people besides Paul who deserve attention here. Russell Westbrook has been dropping 28 points and nine assists per game, with 3-point celebrations that could power entire civilizations.

Then there’s the ongoing war between Serge Ibaka and Blake Griffin. Ibaka has made Blake’s life a living hell on all those post-ups. Suddenly we’re back to 2012, and it looks like Griffin has no interior moves again, he’s not as confident in his jumper, and he’s whining to refs just about every trip down the floor. It changes the whole offense for L.A. Now it’s much harder for the Clippers to work from the inside out, and suddenly they’re as dependent on streaky shooters as they’ve been over the past few failed postseasons. All because of Ibaka.

There’s also Doc Rivers. Or Scott Brooks and his continuing quest to drive the whole Internet insane with his shitty fourth-quarter offense. There’s Kevin Durant, the best scorer on the planet, but also the guy settling for way too many 20-foot fadeaways in close games. Then you have role players Jamal Crawford, Darren Collison, Matt Barnes, Caron Butler, and Reggie Jackson. And Steven Adams, King Troll, throwing his body around for 20 minutes a game and inching closer and closer to inciting a full-scale riot.

Everyone has a role in what happens from here. But you know what? It’s OK if you forget all of those people. 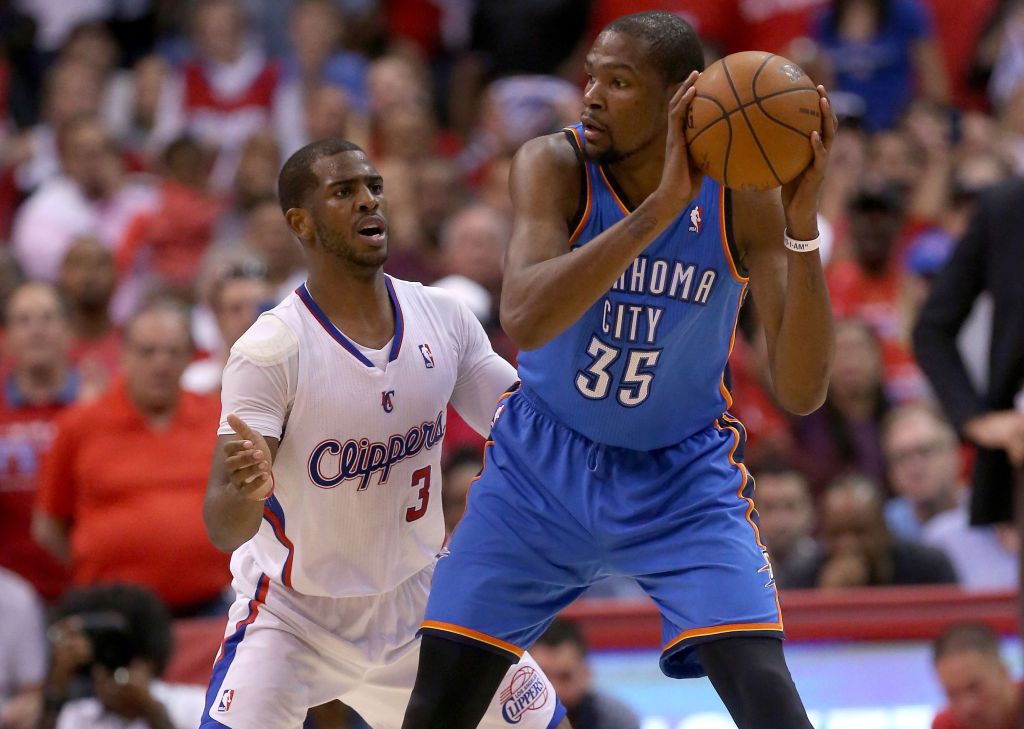 Watch the bowlegged jumpers that always draw a little bit of rim but somehow fall anyway. Watch when he explodes around a pick at a 45 degree angle, bowls into the lane, and then kicks to a wide-open shooter. Watch when he draws contact on a layup and then scowls all the way back down the court, pissed off about the call he didn’t get.

Watch him hobbling up the court 10 times a game, rubbing his sore hamstring, only to go back to warp speed when it’s time to get into the lane. I still can’t tell if he’s hurt or that hamstring rubbing is just some mind game he’s playing with all of us.

Watch him on defense, where he’s barking out play calls, getting in passing lanes, and harassing shooters. He’s the best perimeter defender the Clippers have right now, which basically means he’s splitting time between guarding Russell Westbrook and Kevin Durant. Which is insane. He’s also getting away with an unimaginable amount of contact, but that’s part of the legend at this point. I think even the refs are scared of pissing off Chris Paul. 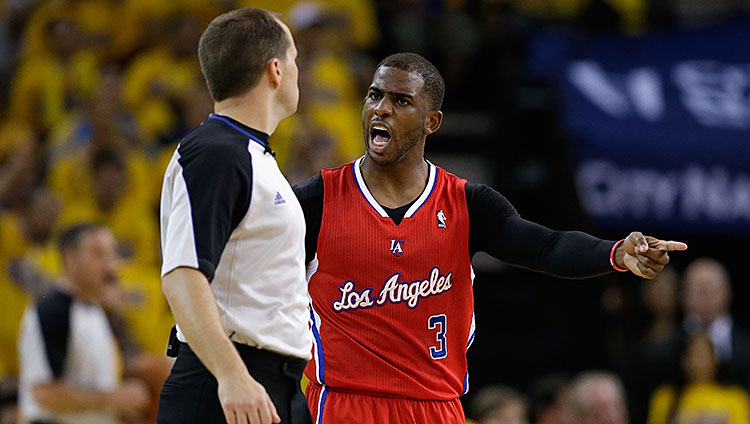 I’m just saying, a good way to watch this series is just to watch Chris Paul on every play. That’s probably always true with the Clippers, but these past few weeks have been another level — whether it was dropping 11 points and eight assists during the second-half comeback in Game 7 against Golden State, eight 3s in Game 1 against OKC, or everything he did on Sunday.

The Clippers should’ve lost Game 4. That win still feels like a fluke two days later, and it’s probably misleading to say this series is tied. For the last three games, OKC has made it pretty clear it’s the better team. But CP3 will keep this interesting. It’s the playoffs, and that means Chris Paul is pissed off, and pissed off Chris Paul might be the most entertaining player the NBA has.

So consider all this an update to what we were talking about with the Clippers a few weeks ago: Yes, the Clippers are best when the offense runs through dominant Blake Griffin. (Probably not happening in this series.) If not that, they need perimeter role players to hit open shots to have a chance. (Maybe happening in this series.) But if Paul can’t do everything, that shouldn’t keep you from appreciating everything he’s doing.

I wrote that other column a few days before the Sterling news broke, and since then, all these Clippers games have taken on more significance. Not because winning will somehow end racism, but because there’s been a cloud hanging over this team. Are they really done with the Sterlings? How ugly will this get over the summer? Will Doc stay through all of this?

Those questions disappear when actual Clippers games start. When Paul is out there taking on guys twice his size and winning, it’s hard to worry about anything else. He’s already done more than I thought possible a few weeks ago. Win or lose, watching him get diabolical has been the antidote to three weeks of depressing Donald Sterling news. It makes you remember that no matter who’s signing the checks, this has always been his team. (Go listen to Arash Markazi on our NBA After Dark podcast — even among the miniature society of Clippers kids, Chris Paul’s son is the undisputed king.)

There will be people who say this whole run is a response to what Sterling has just put this team through, and maybe that’s true. There’s also a good chance this is how Paul has always played in the playoffs, and he hates losing more than anyone could ever hate Sterling.

Either way, enjoy this. We can wait till the summer to talk about ownership rights, and Magic Johnson, and the NBA constitution. Right now, let’s just focus on the point guard against the world. This series is tied, but OKC still has the better team, and the Spurs have the better team next round. These are wars even pissed-off Chris Paul probably won’t win. But there’s nothing better than watching him try.