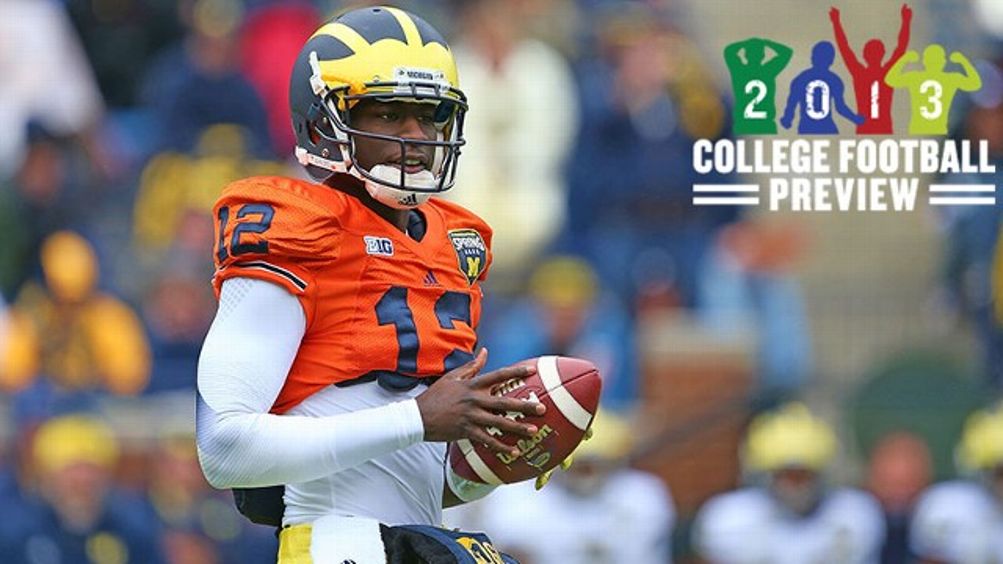 “I didn’t forget how to play quarterback,” Devin Gardner says, matter-of-factly. After a freshman season cut short by a back injury1 and a sophomore season getting sparing backup work behind the natural wonder that is Denard Robinson, Gardner moved to wide receiver in 2012. It was a mutual decision, he says, between himself and his coaches, made without worry for how it might hinder his development at his true position. Desire to just be on the field, anywhere on the field, won out.

“We all understood it was a need at the position,” Gardner says. “They knew I could help and I didn’t want to sit on the bench forever. It definitely didn’t set me back, because you get game-time experience. You can’t ever replace that.”

Game-time experience of a slightly more significant nature was closer than Gardner imagined. In the last week of October, on the road at Nebraska, Robinson reinjured his right elbow, and when Russell Bellomy went 3-of-16 in replacement duty, Gardner was elevated to start against Minnesota. As a receiver, he’d caught four touchdowns in the Wolverines’ first eight games. As quarterback for the final five, Gardner threw for more than 1,200 yards, threw 11 scoring passes, and recorded seven rushing touchdowns. It was a transition he barely had time to process after seeing so little meaningful action at the position.

“It wasn’t anything technical I had to work on. It was more the insight, the run-game stuff that I had to learn, when to get out of plays, things like that. I just jumped into it as quickly as possible.”

Gardner’s first start came November 3 at Minnesota, where he says he didn’t truly feel comfortable until he’d thrown his first interception. “After that, I just thought, ‘It’s my opportunity and I can’t let it slip away.’ And then I ran around and threw a touchdown, and after that I just felt like I was in high school again.”

Robinson, when he was able to return in mid-November, was not able to throw effectively and did not return to the starting quarterback position, taking most of his snaps at running back. He was a constant mentoring presence for his former backup throughout the second half of conference play, beginning as soon as it was apparent he wouldn’t be able to play the following week against Minnesota.

“Denard always told me to just be confident,” says Gardner. “Be confident in myself and in my teammates. I’m a confident person already, but it reassured me. He was always telling me things he saw on the field, reminding me ‘This is your team, this is your team and you’ve got to lead us.'”

Now, with Robinson gone to the Jacksonville Jaguars, it’s well and truly Gardner’s team. He’ll be the first to tell you he is not his predecessor — “All the things Denard did, they can’t be duplicated” — and this will not look like Denard’s offense, as the Wolverines settle back into a pro-style system, the style that at one stage was a conveyor belt that produced Jim Harbaugh, Elvis Grbac, Brian Griese, and Tom Brady. But it’s a situation Gardner is more comfortable with, feeling that this offense gives him a better CV for any interested NFL scouts, to say nothing of the comfort levels of offensive coordinator Al Borges.2

As has been the case since his second start last season, Gardner will have freedom to change plays at the line of scrimmage. And what better place to pick up tips on that – and garner some nice preseason hype — than at the Manning Passing Academy?3 Gardner’s workout habits this spring and summer seek to emulate the elder Manning brother’s offseason regime. “We’ve been throwing every chance we get. Everybody has different class schedules, so I’ll come in two or three times a day to get all the receivers in. A lot of people finally understand that every year we’ve just been so close, we just missed our chance to get the Big Ten championship.”

With the notable exception of a home game against Notre Dame in Week 2, Gardner will see a lot of friendly environments in which to advance his team’s aspirations, with Central Michigan, Akron, UConn, and Minnesota on the early slate. After that, things get trickier, with the likes of Penn State, Nebraska, Northwestern, and the reviled Buckeyes. And with a lock on the starting job from the jump comes elevated expectations. Gardner says he appreciates those.

“I mean, it’s cool, because when you’re a kid you invite all those things, and you really like that people give you a lot of recognition, but that doesn’t matter. Because what I do on the field is really what matters. I’m just going to play my best and do what I can.

“I’m not going to let any other expectations dictate the way I play.”

• That’s a Clowney question, bro. This is about all you, the college football consumer, remember from the Outback Bowl, right? It has blotted out all other memories and perhaps part of the sun:

Gardner didn’t put on his best offensive performance against a talented, hostile South Carolina defense, but remembers all the time he had to throw that day, free of Jadeveon Clowney’s clutches. “Taylor Lewan is the best left tackle in the country. [Clowney] didn’t touch me one time. It was one play where he wasn’t blocked, and everybody’s kinda blowing that up. But every time I looked, Taylor had him in check and I wasn’t worried.”

• Mouths of babes. Gardner displayed keen situational awareness at a road game at Purdue early in his career: “Me and Jeremy Gallon, neither of us were playing. We were standing on the bench, just chilling out, watching the game, and I hear ‘DEVIN! DEVIN!,’ you know, from the opposing crowd, and I’m like, ‘Nah, I’m not turning around.’ And then they go, ‘GALLON! GALLON! IT’S FOR MY DAUGHTER!,’ and I’m like, ‘Don’t turn around. Don’t turn around. Promise.’ Jeremy says, ‘I ain’t gonna turn around.’ So I walk away for a second, and then I hear, ‘YOU’RE A GALLON OF … SHHHHH’ and I was like” — he sighs here, shaking his head and laughing — “Gallon turned around.

“And ever since then I loved playing there, because that was hilarious. I said to Gallon, ‘I TOLD YOU.’ He doesn’t even turn around at home games now. He kinda got scarred after that.”

• It turns out you can’t just demand high-profile public figures to hand over their contact information. “People ask me for my number all the time on Twitter. Sometimes I’ll give ’em a fake number. Like a 555 movie number. One guy got so mad at me, like, ‘I CAN’T BELIEVE YOU GAVE ME A FAKE NUMBER,’ and I was like, ‘You should know! It says 555! No number in the world starts with 555! You really tried to call that?'”

• Just imagine how much more forcefully he can hurl his phone at a wall than could your average blogger. A Michigan Man strives for excellence in all things, even if that thing is 4 Pics 1 Word. “I actually had to ask Twitter for help yesterday. I don’t know how good I am. I mean, I’m decent. But you don’t want to seem like you’re not that smart. It’s like, I graduated from Michigan, I feel like I should be able to do this.”

Which is more astonishing: That Michigan has kept the same helmet look since 1938, with slight evolutionary changes (and the occasional ill-advised detour into matte finishes):

The famous “winged” design dates from 1938 when Coach Herbert O. “Fritz” Crisler arrived from Princeton to begin a new era in Michigan football. … The distinctive helmet would also have practical advantages on the field. Crisler figured the helmet would help his halfbacks find receivers downfield. “There was a tendency to use different colored helmets just for receivers in those days, but I always thought that would be as helpful for the defense as for the offense,” Crisler recalled.

… or that the helmet design has remained largely unmolested despite the team now being outfitted by Adidas?4

• Required viewing: You will, of course, want to watch these Wolverines welcome Ohio State over Thanksgiving weekend, but don’t skip that Notre Dame visit in Week 2, particularly with all the motivation Michigan will have to overwrite memories of the ghastly 2012 game.