Wanna Fight? A New Doc About Nicolas Winding Refn Asks Questions About Why We Like What We Like 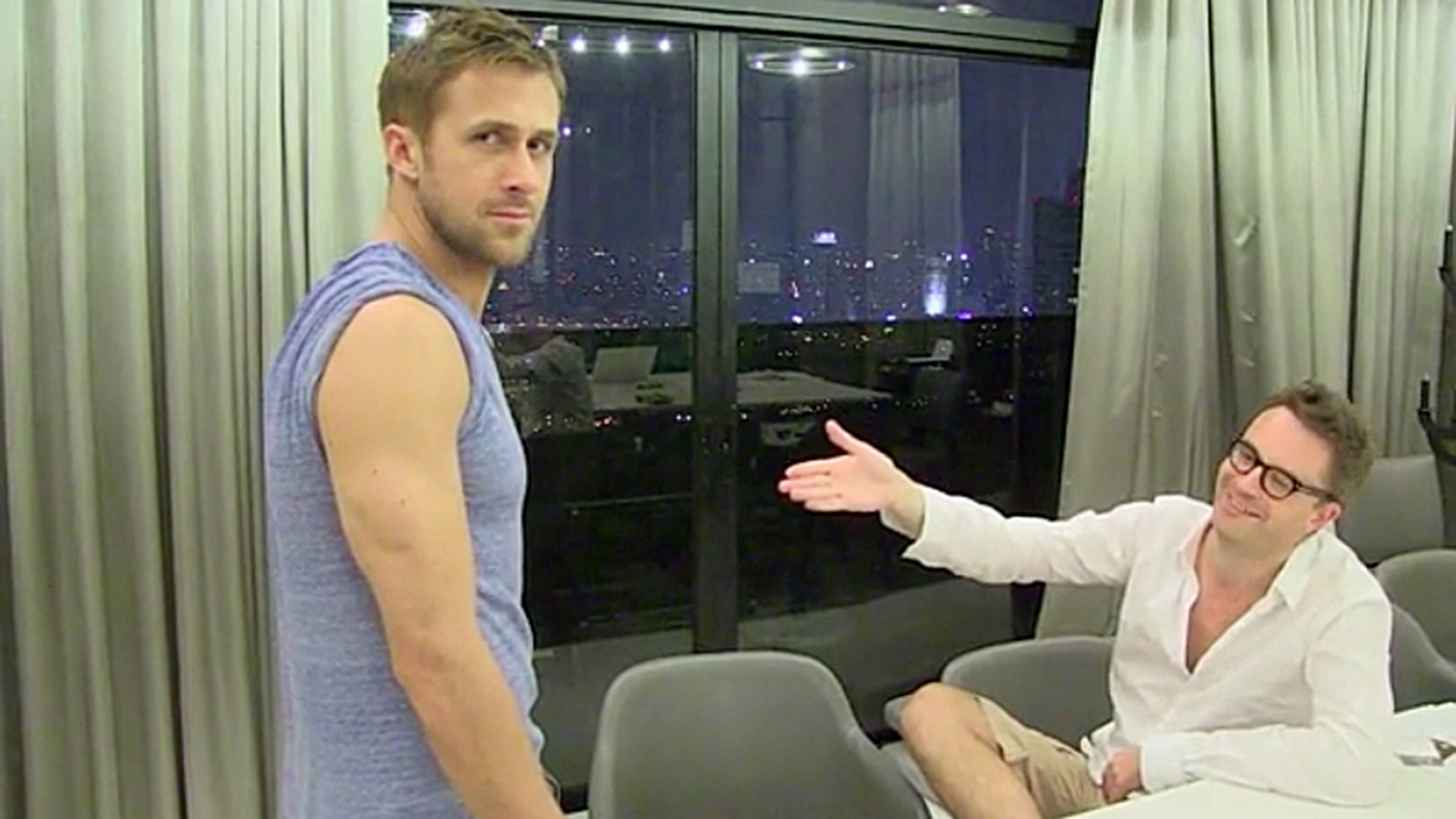 Nicolas Winding Refn’s Only God Forgives has a very special place in my heart. It is the first movie I ever saw and loved, and then — in moments of hindsight, brought on by a combination of vicious reviews, aghast friends, and the sheer confusion with which most people greeted it — had to consider I might have been wrong about. Like, factually, morally, and intellectually wrong.

Released in 2013, two years after Drive put him on the map as a director of importance and not just deliberate style, Only God Forgives more or less erased whatever gains Refn had made. Grantland’s Wesley Morris called it “a one-dimensional video game of death”; New York Magazine’s David Edelstein risked no misunderstanding when he wrote, “I thought it was just about the worst fucking thing I’ve ever seen.” The movie had its defenders, including those who gave it a standing ovation amid the symphony of boos when it premiered in competition at Cannes, but for the most part, it came and went as a curiosity, grossing less than a million dollars domestically and playing not even the slightest role in end-of-the-year awards discussions.

Now, a year and a half later, when you might expect the film to have fully sunk into the purgatory where all despised art-house films go after they die, we speak about it again, because Refn’s wife, actress Liv Corfixen, has released a making-of. The documentary, called My Life Directed by Nicolas Winding Refn, is the opposite of a Nicolas Winding Refn film: Instead of arch framing and elegant dolly shots, we have an unstable handheld camera; instead of elegiac themes of death and violence, we dive into everyday mundanity, taking a close look at the stress, logistics, and frustration of the filmmaking process.

My Life shows a man agonizing and laboring over a movie that we ultimately know will fail. As Refn grapples with the film’s production and the pressures of following up Drive successfully, he comes across as a melancholy goofball, playing with his children or joking with star Ryan Gosling when not lying on his bed with his eyes closed. It’s remarkable how closely his anxieties match the criticisms he’ll ultimately receive, as if he’s aware of the hangman’s noose and is slowly putting his head inside it. At one point, he says, “I’ve spent three years on this movie and I don’t know what it’s about.” He looks woeful, like he’s watching his dog die. Throughout the documentary, Corfixen mentions his sadness over and over: “You’re totally depressed right now,” she says at one point, and Refn doesn’t argue.

This is not a movie about filmmaking; only a small part of the doc takes place on set. Instead, the concerns are a step removed: Corfixen is interested in the impact filmmaking has on filmmakers, their wives, and their children. In one of the earliest scenes, Refn dresses down Corfixen for leaving laundry on the balcony of their apartment building after one of their daughters climbs out to retrieve it. They’re on the 42nd floor, and it’s dangerous, and he asks why she can’t just leave it inside. Corfixen keeps the camera on, pointed at him, as if to say, This is why. The movie and their lives become so entangled that it’s hard to separate one from the other. And considering the extreme, fetishistic violence of Only God Forgives, that’s no small thing; when Refn at one point tries to compare the violence to sex — how it’s all about the buildup and not the climax — Gosling keeps looking over at Corfixen’s camera to defuse the tension. There’s a suggestion here, like: You’ve had sex with this guy?

After Only God Forgives wraps, Refn says to Corfixen, “I think it’s better than Drive, don’t you? Do you think Drive is better?” A minute later, he’s saying, “It’s not a good film,” and hitting himself with his fists as, from somewhere else in the apartment, you can hear the kids yelling at each other. This is Refn at his worst: Tormented by his earlier successes, he can’t let his new movie exist on its own merits. Maybe, some people would say, he shouldn’t. Maybe he’s right.

When I first saw Only God Forgives in theaters, I thought it was superb: a grimy, beautifully constructed phantasmagoria of biblical themes transposed onto a weirdo, imaginary Thai underground. I loved Gosling’s performance, how it barely ever deviated from the mean, and I thought that the police lieutenant, Chang, who is meant to be a sort of crypto-god, was one of the stranger and more exciting characters I’d seen in a long time. And, as I talked to more and more people who just hated the film — like, couldn’t get through it, ethically loathed it, wanted it erased from history — I found myself, for the first time that I can remember, wondering if I’d been tricked, or had tricked myself.

I’m a firm believer in the superiority of personal opinion to any sort of mainline critical consensus, which on the surface seems like an obvious thing to say, but, in the era of Internet debate and constant antagonism, is a rare idea to see in practice. When I’ve said I didn’t like Birdman, so many people have replied, “I feel sorry that you couldn’t enjoy that movie” or “But I like Birdman! Why didn’t you like it?” These are both strange responses, because me not liking Birdman has nothing to do with you liking it, and I accept that both responses can exist, just as I accept that some people would rather watch a desktop screen saver than my favorite film of 2014, Inherent Vice.

The hatred for Only God Forgives had a different tone to it: It was so widespread and, in many cases, born of such deep conviction that it eventually got to me. My Life Directed by Nicolas Winding Refn gave me the opportunity to consider, with the distance of two years and the experience of the filmmaker to help, whether I’d been had. In My Life, Refn says a great movie should be loved by half of the audience and hated by the other half. With Drive, that scale was tipped to the former; Only God Forgives seesawed it into the dirt.

If our tastes in music are deeply personal, our tastes in film are deeply cultural. We want movies to embody something of our society, to be the grandest of its art. The Oscars are important where other awards shows are not because of this desire; giving Best Picture to 12 Years a Slave means an attempt at reckoning with not only the impact of slavery but also with the idea that white people weren’t guiltless conduits, and that slavery isn’t just an abstract part of our past: It was an operation of inconceivable brutality. When a movie like Only God Forgives comes out, and you find it revolting and insipid and insane, then, it seems to suggest a deviance in our culture. Who are the pseudo-intellectual jerk-offs who think this is art? And why are they so full of themselves?

I am one of those pseudo-intellectual jerk-offs. I watched Only God Forgives again — having seen Refn bleed over it, and read the reviews that attack him and his fans as much as they do the film itself — and I still think it’s a great movie, while totally understanding why you might hate it. It’s essentially plotless and absurd, and the catalyst for the events that take place is so brutally, incoherently grotesque that it makes everything to come after feel like the effects of a fever.

What makes Only God Forgives so successful, in my mind, is the attempt by Refn to grapple with some elemental feeling of evil in the world. If you don’t see the violence here as only mindless gore-mongering, then you can imagine how it might be a judgment of its own. The lieutenant is a supernatural giver and taker of death, a guy who can pull a sword from inside his body and discipline the intrusive, arrogant Westerners. It’s a movie about punishment and comeuppance, and it looks gorgeous, with an atmosphere so tightly wound that it becomes propulsive on its own. More than anything else, the movie is mesmerizing, like hypnosis or remarkable athleticism. It very much dares you to look away, and it’s easy and not unreasonable to do so, but if you choose to keep looking, wondrous things unfold.

There are many logical reasons I like this movie. I adore David Lynch, and calling Only God Forgives Lynchian would be like calling the Patriots a football team: It isn’t an observation so much as a statement of fact. I love Alejandro Jodorowsky, and Refn dedicates the film to Jodo, who shows up in the documentary. I love long dolly shots and extremely choreographed action sequences and bright, intense color and melodramatic themes of mythical proportion and movies that have only a metaphorical relationship to actual human existence.

Still, whatever, am I wrong? Probably. Wanna fight?