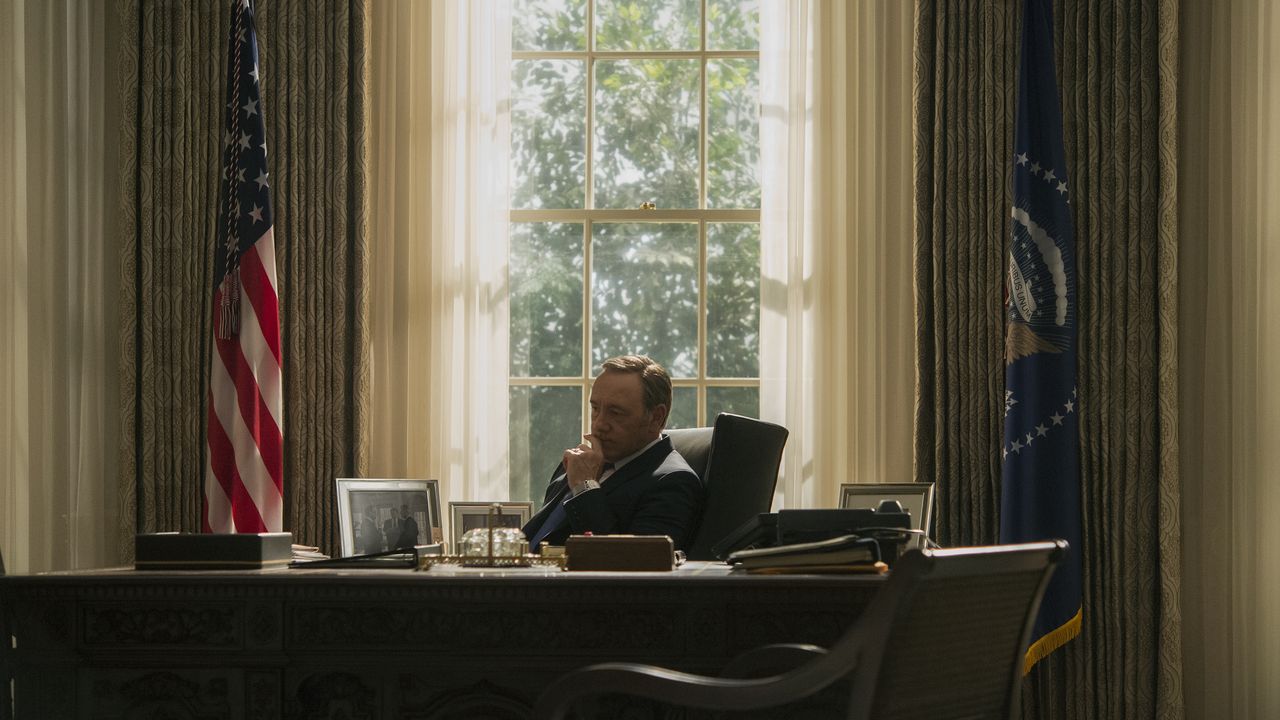 Food TV is a well-established genre — of which I am a particular fan. But there is a flip side to all of those televised hours of cooking, burning, and noshing. It’s called Appetite TV, and I’m beginning to think it’s worthy of its own classification. The Walking Dead is a prime example of Appetite TV. The show, at its best, illustrates the impossible collision of two desperate hungers: that of the survivors to stay alive and that of the zombies to make a meal of those aforementioned survivors. Z-grade reality shows are also prime Appetite TV. The fleeting pleasures to be gained from Real Housewives and Real World: Skeletons derive mostly from the chance to see wild-eyed ego trolls attempt to gobble their way to fame or infamy, whichever arrives first. It’s the rare example when seeing other people chew — scenery, frenemies, what have you — is entirely the point.

The greatest and certainly most celebrated example of Appetite TV is House of Cards, the third season of which arrived seamlessly on Netflix’s servers this past Friday. Last year, I compared the show’s empty calories to Doritos and meant it as a compliment. It’s truly remarkable how showrunner Beau Willimon has crafted something so snackable out of what is essentially hot air. But after watching the first four episodes of Season 3, I’m more concerned with Frank Underwood’s nourishment than my own. Despite its Beltway trappings, House of Cards has always been far more interested in power than politics. America’s vaunted system of checks and balances served as little more than speed bumps for Frank’s sociopathic rise to the presidency. The primary appeal of the show was watching Kevin Spacey devour his underbaked opponents morning, noon, and night. Frank was little more than a ravenous id; his constant, vengeful snacking didn’t seem to sate him, but it did the job for a large portion of the audience.

Ultimately, I didn’t think much of House of Cards’s second season, largely for the same reason I’ve never taken to competitive eating competitions: The gluttony may be impressive, but it’s also kind of gross. (Plus, there are hot dog buns firmer than Michael Gill’s President Walker.) What’s fascinating and ultimately frustrating about House of Cards’s third season is that while President Underwood’s appetite remains robust, his dining options have narrowed considerably. In retrospect, it seems prophetic that Freddy’s BBQ closed up shop at the end of last year. His spiteful goals achieved, Frank is no longer feasting on ribs, content to let the sauce splatter where it may. “I will not be a placeholder president,” he declares in the season premiere. “I will leave a legacy!” For dramatic purposes, this is a lot less compelling than leaving a body count. This is particularly apparent when President Underwood busies himself doing to the social safety net what he once did to Kate Mara. Honestly, it’s a bit like watching Joey Chestnut sip a kale smoothie. Yes, it’s better for him and there’s probably a good story behind it. But it’s not exactly what he’s known for.

It’s fascinating to watch House of Cards run up against the limits of its own predatory success. How can an Appetite TV show be satisfying when there’s nothing left to eat? The series’ strongest character, Corey Stoll’s painfully flawed Peter Russo, was offed in Season 1, and Mara’s vicious Zoe Barnes followed suit early in Season 2. With the cupboard bare, Willimon does his best to inject some residual humanity into House of Cards in Season 3. But it’s awfully hard to retroactively Frankenstein a human heart into what is essentially a monster show. And so great swaths of the season premiere are devoted to the grueling physical and mental rehab of Doug Stamper, Underwood’s ruthless aide-de-camp who was last seen bleeding out of his skull in a Virginia forest. Director John David Coles’s camera lingers almost lovingly on the coarseness of Michael Kelly’s finger hair as he clutches a cane and crumples up prescription paper; it stares mournfully at the bone bulging from Doug’s broken arm. But not even this robust physicality can distract from the painful thinness of the character or the cynical attention being paid to him. I like Kelly a lot as an actor, but without a dark star like Spacey to orbit, he’s lost. Check out the dull sleekness of Doug’s apartment, on loan from a Crate & Barrel catalogue shoot, or the outright dullness of his brother, a zero flown in to suggest backstory and then just as quickly exiled back to it. Though this vague emptiness has always lurked just beneath the surface of Cards — anyone remember the Slugline office? — it was easy to overlook when the red meat was flying. But when Frank isn’t being fed, everyone starves — audience included.

The correct rejoinder to this critique is that I’ve only seen a third of the season and even the White House chef knows you need to amuse a bouche before you stuff your diners. I’ll keep watching, but everything I’ve seen suggests an unpleasant meal ahead. Despite the unseemly ardor with which actual D.C. insiders clamor to cameo as themselves, House of Cards has never been the slightest bit interested in actual policy or governance. (It really makes no sense for actual accomplished people like Matt Bai and Neal Katyal to volunteer to be steamrolled on camera. Do fish secretly dream of being chum?) It’s a series about power that worships executive privilege above all else: “What I can’t be is indecisive!” Frank president-splains to a guy who lost his legs in a U.S. drone strike. This happens after Frank literally pisses on a gravestone and just before he spits on a cross.

Needless to say, House of Cards’s sudden pivot into wonkery is as clumsy as it is bizarre. (Just look at the way Robin Wright’s Claire — oddly retconned into a kind of overmatched Hillary — stares at binders. She wears glasses this season because she really means it!) It goes beyond believing in Frank’s sudden passion for entitlement reform — lest we forget, he’s a murderer who stole the Oval Office out of pique and unchecked ambition. It’s that I find it incredibly hard to get excited about anything he claims to want now that he’s achieved everything he ever publicly desired. As he was picking bits of Tokyo out of his incisors, did Godzilla turn longingly toward Osaka? Who cares! Seconds are never as interesting as firsts. And thirds, well … see for yourself.

Wanna Fight? A New Doc About Nicolas Winding Refn Asks Questions About Why We Like What We Like