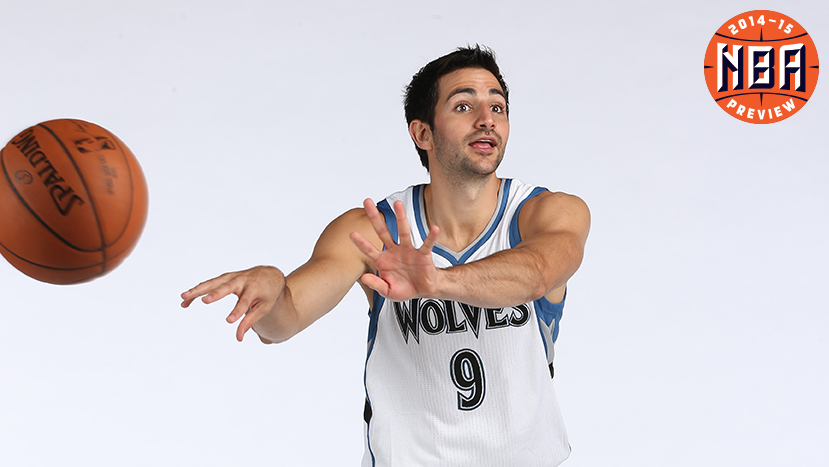 The pieces in this NBA Windows series have been largely concerned with time frames. We’ve been asking, and will keep asking, how long a particular team, coach, or general manager has before a window of opportunity opens or shuts. But “windows” can mean something else. It’s not just about time, it’s also about the view.

Over the past few weeks, there has been a lot of talk about Ricky Rubio’s value. The Timberwolves point guard is going into the final year of his contract. Minnesota can either offer him a deal before the end of October or he will become a restricted free agent. If he does hit the market, he will be part of a pretty healthy free-agent point guard class, joining the likes of Rajon Rondo, Jeremy Lin, Kemba Walker, and Patrick Beverley.

Everything you need to know about the coming season.
Those floor generals will be looking for work in a time when many of the league’s best teams already have a solid to great starting point guard. According to The Sporting News, Rubio rejected a four-year, $48 million extension. He wants the max — which, with the lucrative new TV deal, could include mineral rights to some South Pacific island, so who can blame him? Needless to say, the two sides are far apart in their valuation.

They can join the club.

Few divide opinion like Ricky Rubio. Last season, the onetime darling of basketball junkies bought an apartment on the Champs D’Rudy Gay. A statistical case was made, and no matter how much pixie dust seemed to fly off him when he was running a fast break or throwing extrasensory passes to backdoor cutters, we had the facts, and we were voting “no.” The closer this dude got to the hoop, the more he shot like Mr. Magoo.

Wait, what’s that? Is that And Yet’s music I hear? Ricky Rubio is pure basketball. Despite the knee injuries, the offstage drama, and the on-court tragicomedy happening in Minnesota, and no matter how many times Rick Adelman hooked him for J.J. Barea, or how many bungalows he built with his six-foot bricks, Rubio is just … charmed.

For basketball fans of a certain generation, he will always be the mop-topped, Spanish Pistol Pete, a merchant of no-look, one-handed bounce passes that find impossible openings and land in the hands of grateful would-be scorers. Real point guard junkies can’t hear the sound of flat shots caroming off iron. We’re too busy singing “Emotionally Yours” while watching skills videos of the hardwood Messi.

Ricky Rubio is one of the NBA’s truly benevolent players. And on the right night, on the right fast break, he can make Corey Brewer look like Dominique Wilkins.

I don’t know that you can put a price tag on that. But Minnesota shouldn’t even bother. Whenever two adults in a relationship — personal or professional — start arguing about money, it usually means there’s a sell-by date on that union. This isn’t really about basketball. Forget his pros and cons for a second; sometimes people just need to move on. So, for as tantalizing as it might be to imagine Rubio and Andrew Wiggins doing this all season (and for many seasons to come) …

And for as much as it pains me to hypothetically separate the Timberwolves from another talented basketball player, I think our friend from Spain could use a change of scenery. There has been some talk that Rubio is putting himself forward as a leader on the T-Wolves, but he seems more like a player caught between team generations. He’s not quite of the Kevin Love iteration of the team (certainly didn’t sound like it, at least), and yet not quite of the Bennett-LaVine-Wiggins-Dieng group, either.

Here are four teams I think he’d be suited for. Think of this as an Emotional Trade Machine. In some cases, the money might not work. But what we’re talking about here is fit.

Rubio plays the game with so much joy. By the way, joy is a feeling of great pleasure or happiness. Between Paul George’s injury, Lance Stephenson’s departure, and Roy Hibbert’s undoing, Indiana could use a little bit of it. Also, with the way Rubio shoots, I think it works for him to be playing so close to the Brickyard. Tip your waitress.

With his ball-hawk skills (2.3 steals per game last season), Rubio actually fits into the Pacers’ defense-first philosophy. If there were ever a Larry Bird reclamation project, Rubio is it. If he can turn Stephenson into a borderline All-Star, imagine what he can do with Rubio.

Take this post that Andrew Sharp wrote and replace Eric Bledsoe with Ricky Rubio. Environmentally, I don’t know if trading Minneapolis for Milwaukee is such a huge difference, but I like the idea of pairing Rubio with Jason Kidd (no, I don’t know why I am ascribing Jason Kidd the powers of point guard whisperer, but let’s just go with it), and I LOVE the idea of pairing Ricky with Giannis, Jabari, and LARRY SANDERS!

I feel like any best-destination post has to include a Knicks scenario. Would Ricky’s improv work in the triangle? Not sure. I would love to see him throw passes like this to Carmelo …

He and Phil could have one hell of a book club, and his game has a lot of New York swagger.

Almost makes too much sense. First of all, you medicate Rubio’s jump shot with whatever tonic Chip Engelland uses on those Spurs players. So that’s one problem totally solved. Rubio fits in with the International House of Players makeup of the Spurs roster. He could be the backup point guard to Tony Parker, take on some of his defensive responsibilities, and bring a Manu-like spark to the second unit. Rubio, Kawhi, and Danny Green aren’t exactly Duncan, Parker, and Ginobili, but they might be fun enough to keep Gregg Popovich around for another couple of years after the original Big Three moves on.