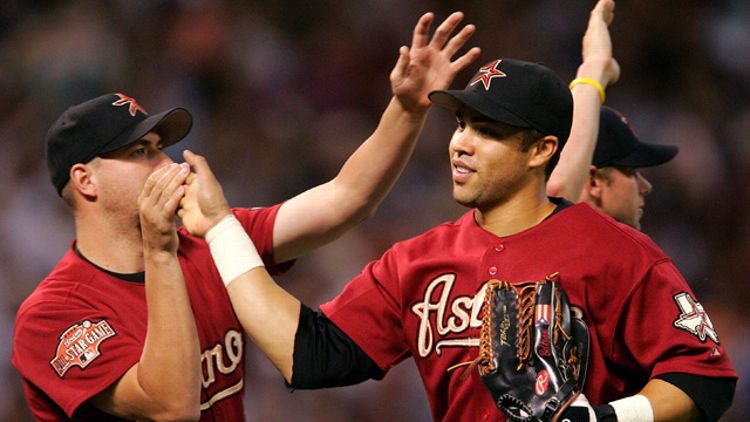 Even a well-reasoned midseason trade can come back to haunt a team that is interested in winning now. If giving up three future All-Stars and missing the playoffs anyway is the worst-case scenario, what’s the best?

In June 2004, the Houston Astros were not exactly looking anything like a playoff juggernaut, bouncing between fourth and fifth place in the NL Central, looking up the standings at a Cubs team that was five outs away from making the previous World Series and a St. Louis club that would go on to win 105 games. Still, the Astros were only about five games out of the division lead.

With Carlos Beltran on the verge of free agency and, as a 27-year-old switch-hitting, five-tool center fielder, likely to command an exorbitant salary on the open market, the Kansas City Royals once again worked out a deal with their frequent trade partners in Oakland (to whom they had previously dealt or lost Jermaine Dye, Johnny Damon, and Jeremy Giambi). However, this time it was a three-teamer that netted the A’s pitcher Octavio Dotel, and sent third baseman Mark Teahen, catcher John Buck, and pitcher Mike Wood to Kansas City. So for Buck and Dotel, the Astros got Beltran, a player who helped them leapfrog four teams in the wild-card hunt and finish 92-70.

This trade is interesting for two reasons: First, it happened in June, not July. Most blockbuster midsummer trades happen within a few days of the deadline, when the buyer and seller classes have clearly shaken themselves out and general managers have as much information as possible. Besides (and this is a refrain of Sam Miller of Baseball Prospectus, though I have no idea if he was the first person to voice this thought), many credible buyers are relatively certain they’ll make the playoffs anyway, so having the extra month of Beltran (or, this year, Jake Peavy or Alex Rios or whoever) isn’t that important because any additional piece is mostly being added for the postseason.

But in 2004, with his team mired in an extremely crowded playoff race, Astros GM Gerry Hunsicker pulled the trigger on the Beltran deal a month early.

Second, Beltran was a huge return for a decent catching prospect and a reliever. The 2004 Astros had pitching to burn: Roger Clemens, Andy Pettitte, and Roy Oswalt in the rotation, Brad Lidge to close it out. Dotel was probably the Astros’ second-best reliever at the time, but with that rotation and one of the best center fielders in the game, you can figure out the eighth inning later.

One other note: Beltran is a slam dunk Hall of Famer by just about any quantitative measure, and like Adrian Beltre, whose case for enshrinement is similarly reminiscent of Dominique Wilkins, he’s probably not going to get in. It’s worth making the argument in depth in a separate post, but also worth mentioning here.

Anyway, the Astros were four games over .500 before the trade, 18 games over .500 after it, whether through Beltran’s influence, happenstance, or both. Beltran hit .258/.368/.559 in 399 plate appearances, with good defense in center field and 28 perfect stolen base attempts, good for either 4.5 or 3.9 wins above replacement, depending on whether you ask Baseball Reference or FanGraphs. It was a great half a season, worthy of MVP consideration, though after splitting his year between the two leagues, Beltran was shut out of the vote entirely. In total, he ranked second among qualified center fielders that year in wins above replacement, home runs, runs scored, triples and slugging percentage. He was third in stolen bases but had by far the best success rate. It was a really good season, but like Astros’ won-loss record post-trade, it wasn’t historic.

It got historic once the playoffs started. Beltran got hit by a pitch from Juan Cruz in the seventh inning of Game 1 of the NLDS and was lifted for Jason Lane (who, to be fair, homered in his only at-bat). But apart from the last two innings of that game, Beltran was on the field for every moment of the Astros’ 12 playoff games. And what moments they were: 56 plate appearances, a .435/.536/1.022 triple-slash line, including eight home runs and a perfect 6-for-6 in stolen bases.

You can harp on his being the last out of the Mets’ 2006 season all you like, but Beltran’s 2004 was one of the greatest postseason performances of all time. He demolished the record for runs scored in a postseason and tied the record for home runs, despite hitting only 56 times when par for the course on both top 10 lists is closer to 70 plate appearances. If ever there were an argument against using a team’s playoff accomplishments to evaluate an individual player’s value, this is it.

It’s almost certainly fair to say that this trade, in which Houston gave up a reliever and a decent catching prospect, got them into the playoffs (by one game), and once there, got them closer to a World Series appearance than they’d come in 24 years. There’s not really a whole lot more to want from a midseason trade.