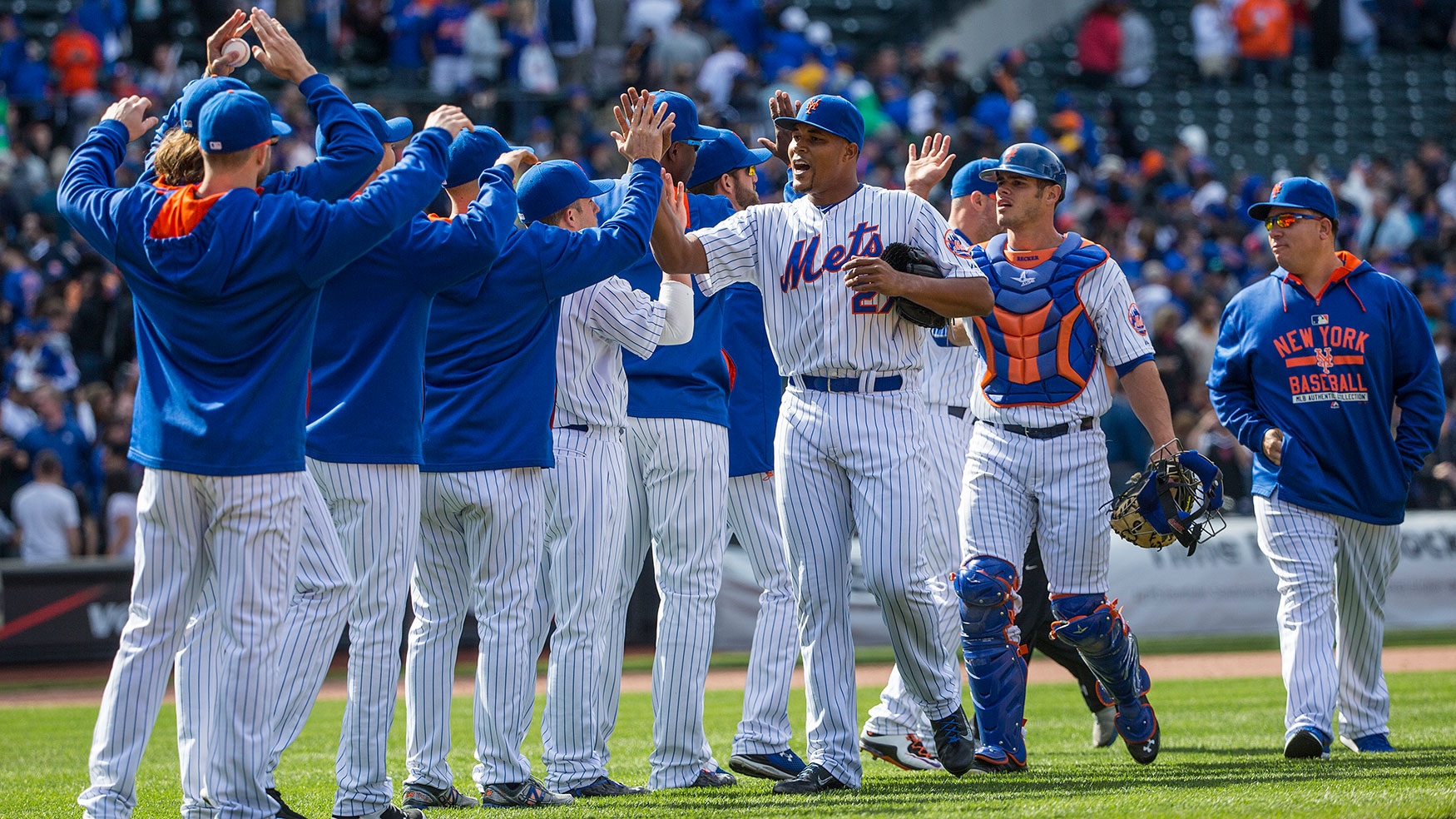 Every Bartolo Colon start is an event.

Watching a soon-to-be-42-year-old pitcher do anything at the major league level should be compelling enough. But when that pitcher throws fastballs 87 percent of the time, you wonder how he can possibly survive in the big leagues with such a limited repertoire. When he’s listed at 5-foot-11, 285 pounds — but almost certainly weighs more — you rub your eyes in disbelief. And when he comes up to bat, lunges into a pitch, and bloops it into right field for a run-scoring hit — well, that’s the stuff baseball fans’ dreams are made of.

Fourteen games into the season, the New York Mets might be the most fun team in baseball — and the large, lovable, illogical Colon serves as the perfect symbol for them. The Mets own the season’s longest winning streak in the majors at nine games and the best record in the National League. Their 11-3 mark is tied for the best start in franchise history with the 1986 team, the last Mets club to win the World Series.

For a team with six straight losing seasons, no playoff berths in nine years, and just one in the past 15, this is a big deal. The Mets might actually be good, and much like their Opening Day starter’s continued success, it’s been delightfully surprising.

Despite a 2.25 ERA and 18-to-1 strikeout-to-walk rate, Colon still doesn’t qualify as the staff ace. That honor, of course, goes to Matt Harvey. From the moment he crashed the majors with a brilliant late-season debut in 2012, Mets fans have honored each of his starts with the moniker #HarveyDay. And when Harvey returned for his first start of 2015 after missing more than a full year because of Tommy John surgery, it escalated to a full-blown party.

Watching Harvey operate, it’s easy to understand the near-reverence for his abilities among the Mets faithful. At 6-foot-4, 215 pounds, prototypical size and strength fuel his blistering 97 mph fastball, in addition to a changeup that drops down to 88 and a beautiful Koufax-esque mid-80s curve. In his first three appearances, he’s walked one batter over 18 innings, while striking out 24 and allowing seven earned runs and 17 hits. He outdueled Washington’s Stephen Strasburg in that first start and made Bryce Harper look like an overmatched hack. Through two weeks, it’s safe to say Harvey is back: Fans are already dressing up like the Dark Knight and chanting his name before he even throws a pitch.

After Harvey, Colon probably isn’t even the no. 2 starter on the staff; that’s Jacob deGrom. A ninth-round pick by the Mets in 2010, deGrom was never considered an elite prospect, failing to garner a single top-100 ranking from any major prospects-ranking outlet. And his minor league numbers didn’t suggest future stardom, either. When the Mets called him up last May, it initially looked like deGrom would work out of the bullpen. But then starter Dillon Gee hit the DL and the Mets were forced to throw deGrom into the fire.

He earned his team’s trust and fans’ love from day one, making 22 starts and striking out 144 batters in 140.1 innings, with just 117 hits, seven homers, and 41 unintentional walks allowed en route to winning the National League Rookie of the Year. He’s shown no signs of slowing down this year, posting a microscopic 0.93 ERA through his first three starts. While his fastball doesn’t have the same blinding velocity as Harvey’s, deGrom’s 94-95 mph offering has been incredibly effective thanks to his pinpoint control: Of the 109 pitchers with as many innings pitched as the 26-year-old since the start of last season, only six have squeezed more value out of their fastballs.

Although they’ve been unbelievable, we did expect the Mets’ starting pitching to be really good. New York has so much starting pitching talent that Zack Wheeler’s absence1 hasn’t been felt at all, and the team is able to keep monster prospects Steven Matz and Noah Syndergaard waiting in the wings at Triple-A.2 Even now, with the team in first, the question coming into this season remains the same: Does the rest of the roster have enough talent to mount a playoff run?

Last year, the Mets finished a sub-mediocre 21st in park-adjusted offense. The biggest trouble spot was left field, where the Young Black Hole sucked untold amounts of life from the offense.3 In response, the Mets signed Michael Cuddyer to a two-year, $21 million contract over the winter.

That move was puzzling, to say the least: Cuddyer turned 36 years old just before Opening Day. He has ranked as one of baseball’s worst defensive players for years and seemed far better suited for DH duty than the everyday outfield job the Mets offered. He missed all but 49 games in 2014 with thigh and shoulder injuries. And to top it all off, the Mets surrendered the 15th overall pick in the amateur draft for the right to handsomely compensate this aging, injury-prone, range-challenged outfielder.

So far, Cuddyer is batting .306/.370/.469, but much of that hot start is fueled by an off-the-charts .452 batting average on balls in play. Earlier this month, Mets GM Sandy Alderson told me that while his new left fielder wasn’t going to win any Gold Gloves, Cuddyer would likely hit well when healthy. Alderson also said that if the team hadn’t given up a draft pick to sign Cuddyer, the alternative likely would have been to trade valued prospects for a player who wasn’t necessarily much better. That second point is debatable — Nelson Cruz was available, for one — but compared with what the punchless Youngs offered, even 130 games of a healthy Cuddyer could tack a few wins onto the Mets’ ledger this year.

As the Wilpons are still digging out of the hole Bernie Madoff left them in, the rest of the offseason was basically dead quiet. The club entered Opening Day with one of the 10 least-expensive payrolls and, other than Cuddyer, the same below-average lineup as last year.

Standing pat, then, didn’t seem like the way forward, but if you squinted hard enough, you could see Alderson’s thinking, financial restrictions or not: Ruben Tejada and Wilmer Flores occupied most of the time at shortstop last season, and neither did anything of note with the bat, but the 23-year-old Flores was once a Baseball America top-50 prospect and hit a solid .292/.334/.440 in the minors. David Wright batted just .269/.324/.374 in 2014, the worst offensive season of his career, but a lot of those struggles were due to nagging shoulder injuries, and Wright, who was an elite hitter in the two previous seasons, came into the spring healthy. Combine that potential improvement from the left side of the infield with the emergence of slugging first baseman Lucas Duda and acrobatic center fielder Juan Lagares, and through the still-small sample of 14 games, the Mets are essentially a league-average offense. With top-five starting pitching and a so-far stingy bullpen, that might be all they really need.

Just a few weeks into the season, the team’s depth is already being tested by injuries. Wright and starting catcher Travis d’Arnaud both hit the disabled list in the past seven days. Wright’s hamstring injury isn’t expected to fully heal for at least two more weeks, and d’Arnaud is likely out until June.4 And with Jerry Blevins (forearm fracture), Vic Black (shoulder), and Bobby Parnell (recovering from Tommy John surgery) all out at least a few more weeks — in addition to Jenrry Mejia’s 80-game suspension after testing positive for Stanozolol — the bullpen is suddenly looking thinner than you’d hope.

In addition to some health-related fallback, skeptics could point to some schedule luck as a big reason the Mets’ hot start won’t continue. The Nationals were missing three of their best players when they dropped two to New York to start the season. The Marlins look so dysfunctional, they might already be considering a managerial change. And the Phillies are the terrible Phillies. With that level of competition likely to improve as the season goes on, and multiple injuries thinning out the roster, there’s an argument to be made that we’ve already seen the best of the 2015 Mets.

The good news here is that as long as Harvey and deGrom are healthy — and Colon5 continues to defy multiple laws of science — the Mets can go toe-to-toe with nearly any other team on pitching strength. Plus, there are contingency plans in place in the high minors, with Matz, Syndergaard, talented second baseman Dilson Herrera, and others just a phone call away. And there’s even enough depth for Alderson to test the trade waters if Cuddyer’s health fails him, the pen needs reinforcements, or some other problem crops up.

So go ahead, Mets fans, and do your best Bartolo impersonation. Dream big, really big.