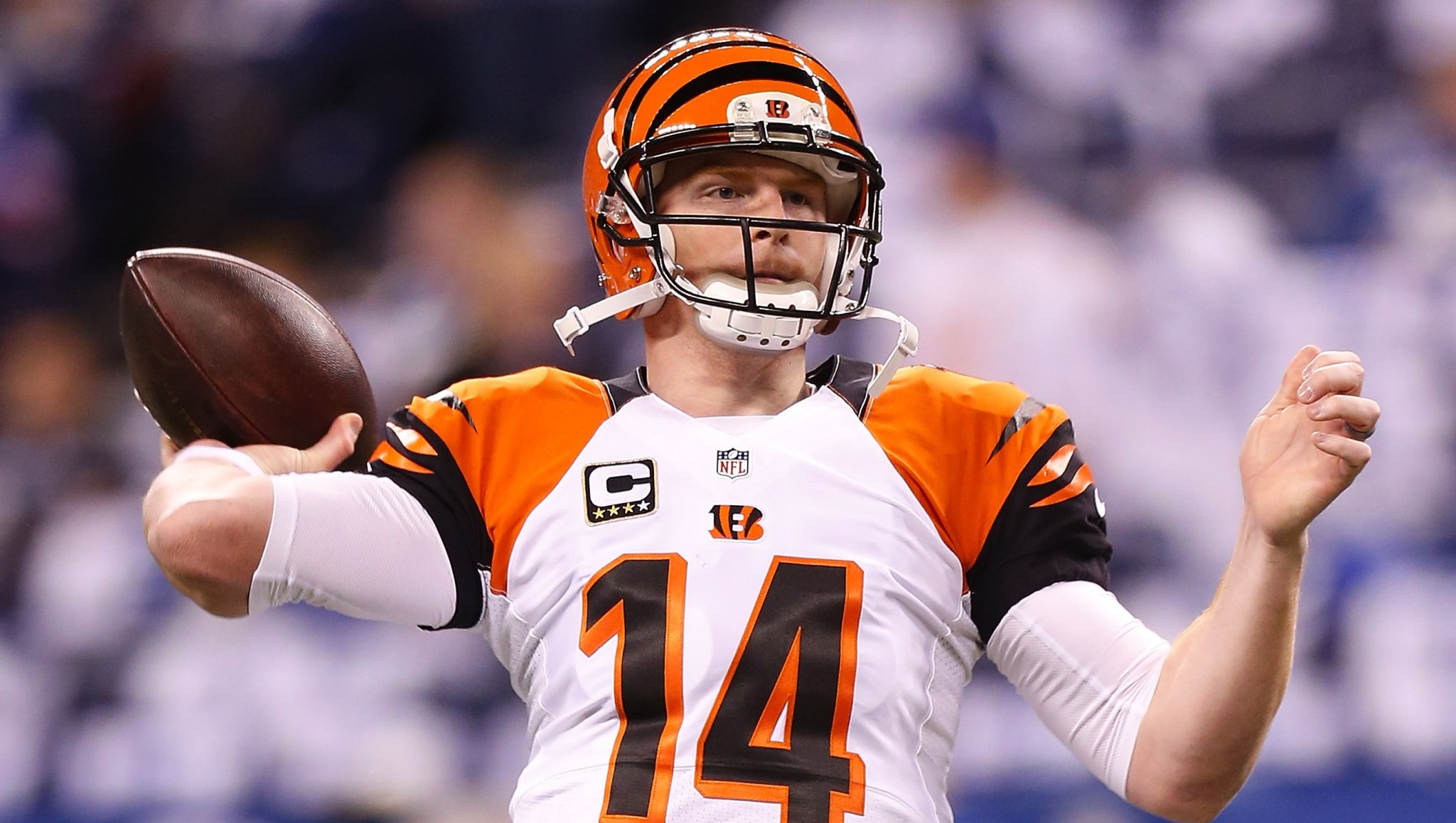 Only the NFL could take a bit of information we already know and turn it into a three-hour announcement. The league’s annual schedule release day is a farcical litmus test of how desperate we are for NFL news in the middle of April, but you know that already. If you’re a fan who wants to book a trip to see your team play, you probably can justify caring about what happened last night. Otherwise, given that we’ve already known who each team will play for months, this shouldn’t be breaking news.

Because it’s treated like a big deal, writers feel the need to write something about schedule release day. That usually ends up as a “Best Games of the Season to Come” column, which is as informative as it sounds. The particularly ambitious put things in context by analyzing each team’s strength of schedule, but even that tends to be relatively useless because of the engine the logic is being built upon. Judging an NFL team’s talent level by its win-loss record in a 16-game sample is tough; using it to project what they’ll look like in the future, after an offseason of wheeling and dealing, is even tougher.

With that in mind, let’s try to use more accurate measures of organizational talent and performance to project what each team’s strength of schedule will look like in 2015. The only reliable way to judge strength of schedule accurately is to wait until the season is over and count accordingly, but until then, let’s improve on simply counting up last year’s wins and losses.

Let’s start with our old friend, the Pythagorean Expectation. Historically, as is the case in other sports, point differential has been a better indicator than win-loss record when trying to predict future win-loss record. I’ve written at length about this very topic. Here, we’ll use it to give a better indication of each team’s level of performance from last season and then use that to project each team’s strength of schedule in 2015. The table below includes each team’s strength of schedule as calculated by win-loss record and that same figure calculated using Pythagorean Expectation:

The results are roughly similar, which isn’t a huge surprise. The difference between a team’s win-loss record and its Pythagorean Expectation is almost always two wins or fewer. That’s still meaningful, though, and for some teams, it can represent a notable swing in their estimated strength of schedule. Let’s run through a few of them:

That’s a pretty substantial swing for the Seahawks, who naturally enjoy the benefit of not having to play themselves in both cases. Why the gap? The difference between their estimated strength of schedule figures starts with Seattle’s two games against Arizona. While the Cardinals went 11-5 last year, they outscored opposing teams by a total of only 11 points. That’s good for a Pythagorean Expectation of just 8.3 wins. The only other teams in the NFC that outperformed their point differential by more than one win were the Lions (1.8 wins over expectation) and the Cowboys (1.4 wins), and the Seahawks play both of them too.

The Ravens also have the Cardinals scheduled, as the AFC North suits up against the NFC West this season. Baltimore also gets two games against the league’s second-luckiest team from last year, Cincinnati, which posted a 10-5-1 record despite outscoring their opponents by a mere 21 points. Giving the Bengals half a win for the tie, their 10.5-win figure is 1.9 wins ahead of their Pythagorean Expectation of 8.6 wins.

As if the Packers need the help. They also have the Cardinals on the docket this year, as the NFC West’s other divisional trek sees it play the NFC North. Although I doubt the ordering really matters all that much, the Cardinals finish with a brutal stretch that sees them travel to Philadelphia before hosting the Packers and Seahawks over the final two weeks of the year. If the Cardinals are down to their third-string quarterback again by the middle of December, things could get ugly. Like the Seahawks, the Packers also face the Cowboys and Lions.

One team whose schedule looks relatively tougher after making these adjustments is Denver. While the Broncos do play the Bengals and Lions, they also get two games against the Chiefs, who were one of the six teams with a Pythagorean Expectation (10.1 wins) that outperformed their win-loss record (9-7) by more than one win. Those six teams:

The poor Colts play four games against the six teams on that list, including a pair against the Titans and a game against the Buccaneers, who stick out as the team that most obviously underperformed its point differential. (The Buccaneers were a horrific 1-8 in games decided by a touchdown or less last year.) The good news is that those teams are still projected to be bad, so even if they’re a couple of wins better than last year, the Colts don’t have a ton to be worried about with their schedule.

OK. So that’s a better measure of how teams performed in 2014. What about expectations for how they’ll perform in 2015? It’s still tough to analyze given that we haven’t yet seen what each team will do in this year’s draft, but Vegas is already taking care of that problem for us. CG Technology (formerly Cantor Gaming) posted win over/unders for each team earlier this year, and after a couple of months, they’ve been bet up, down, and around. Bettors have faded the, well, fading 49ers while backing teams like the Colts and Buccaneers.

These Vegas figures aren’t perfect by any means, as some estimate of strength of schedule is naturally already baked in. But for the purposes of estimating the relative success we can expect each team to approach this year, it’ll serve us fine here. Using the over/under lines from Monday as our baseline, we can produce another estimated strength of schedule measure:

Let’s run through the league’s easiest and toughest schedules based on over/unders and see why they’re at the extremes.

Do you know who had the easiest schedule last year per Football Outsiders? Why, it was the Houston Texans! In 2014, the Texans played as many games against playoff teams (six) as they did against teams that will pick in the top five of the upcoming draft. And while the Jaguars and Titans both project to be better in 2015, better does not mean good. The AFC South also gets a friendly duo of paired divisions this year (AFC East, NFC South), which helps the Colts enjoy the league’s second-easiest schedule. The Titans are even fifth!

Likewise, the teams of the NFC South get to play the AFC South, which is hardly a juggernaut in its own right. The Saints also suit up for six games against their relatively weak divisional brethren and get to play the NFC East, which may look like the worst division in football if the Cowboys and Eagles take expected steps backward. New Orleans’s other games are against teams with inflated 2014 records, as the Cardinals and Lions — who won a combined 22 games — have a combined over/under of just 16.5 wins this year. Their division rivals in Atlanta get the Vikings and 49ers.

The numbers don’t appear to be lining up for the Bengals in 2015. They’ve managed to remain remarkably consistent over the past several seasons, but with their point differential dipping by more than 100 points from 2013 to 2014, the Bengals will also have to overcome what could be the league’s most difficult slate of opponents. They face the Bills and Texans, who each had 2014 Pythagorean Expectations of 9.6 wins or more and who have 2015 over/under figures of 8.5 wins, just as the Bengals do. In addition to negotiating their division, which sent three teams to the playoffs, the Bengals will join the rest of the AFC North in dealing with the second-most difficult set of divisional pairings this season. They’ll have to play the AFC West and NFC West, which also pushes the Steelers toward the top of the schedule rankings. Pittsburgh is fourth by this Vegas-focused measure, but it’s dealing with the second-toughest schedule if we instead look at Pythagorean Expectation.

Obviously, the Cardinals have to play the Seahawks twice. That puts a damper on things. While the 49ers aren’t projected to be as effective as they were in years past, Arizona will also have to line up against a pair of wild cards in New Orleans and Philadelphia, and the Cardinals — along with the remainder of the NFC West — will be facing the league’s toughest duo of divisional pairings. The NFC West has to play the AFC North and the NFC North, and even if the Lions and Bengals take a step backward, that should be a brutal slate. Arians and Steve Keim have been a magical combination through their first two years together; they’ll have to take it to another level to repeat their playoff run in 2015. The embattled 49ers are just behind them in third.

And this one just doesn’t seem fair at all. The Raiders faced what Football Outsiders estimated to be the league’s toughest schedule a year ago, and things won’t be much better this time around. Reggie McKenzie will surely be rooting for San Diego to trade away Philip Rivers and rebuild, because six games against the Broncos, Chiefs, and Chargers is a downright ruthless way to begin thinking about a schedule. The Raiders are also stuck playing the AFC North and NFC North, and while they would typically get the benefit of two awful teams by virtue of their last-place division finish from a year ago, one of those teams is the Jets, who have a 6.5-win total posted in Vegas. There are reasons to be hopeful in Oakland, but the schedule is not one of those reasons.

There’s still more clarification coming. CG Technology will release individual game spreads in the weeks to come, which will allow for a far more accurate measure of schedule strength, like the one Chase Stuart put together last year. The draft will also shift many of those projections around, which will affect schedule strength — the Titans may look like a far more formidable opponent if Rivers is at the helm. In any case, it’s going to be a tough year for the AFC North and a friendly year for the NFC South, no matter how you slice the numbers.