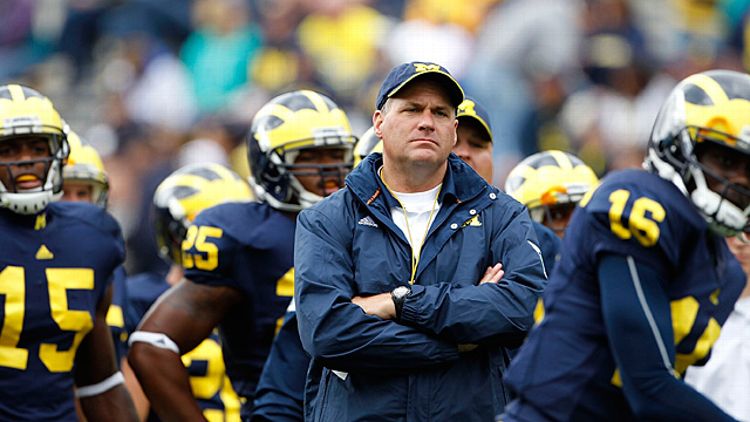 When Michigan and Alabama kick off in Arlington tomorrow night, the man most responsible for bringing them there will be starting over. He’ll be 950 miles away, likely tucked in an office, waiting out the two hours before he begins again. Rich Rodriguez will be in Tucson, preparing to coach his first game at the University of Arizona. He’ll be far from Jerry Jones’s kingdom and the gem of college football’s first weekend, but without him, the Wolverines and Tide might be just as far away.

It’s a testament to what Nick Saban has done in Tuscaloosa that for those removed from Alabama’s football program, it’s hard to remember any of the mess that came before. The shine of those crystal footballs has a way of leaving Mike Shula in the dark. The truth is that it didn’t take Saban long to get his statue. It was less than six years ago that he was pried away from the Dolphins, and in that time, the success has made it easy to forget that the man who’s already a legend wasn’t even Alabama’s first call in the winter of 2006. That was Rich Rodriguez.

Rodriguez had just finished his second straight 11-win season at his alma mater, West Virginia. The Mountaineers’ offense, the spread zone-read founded by Rodriguez and nearly perfected by his combination of Pat White and Steve Slaton, had made Rodriguez the hottest coach in the country. The 6-7 Tide came calling, but despite a promised 50 percent raise and a chance to sit in Bear Bryant’s chair, Rodriguez stayed home. Almost six years later, Alabama will begin its second national championship defense in three seasons.

A year after turning down Alabama, Rodriguez’s next call came from the winningest program in the history of college football. Michigan started the 2007 season as one of the best teams in the country. Then they started playing. The season-opening loss to Division I-AA Appalachian State was perhaps the most embarrassing in the history of college football and set the tone for a 9-4 finish. The season would be Lloyd Carr’s last in Ann Arbor.

To say Michigan botched the attempt to find his replacement would be kind. The worst-kept secret in college football that winter was the school’s interest in LSU coach and former Bo Schembechler assistant Les Miles, but with Miles’s Tigers set to play in the national championship game and Michigan’s inability to keep any contact between the two sides quiet, that option passed them by. Next on the list was Rutgers coach Greg Schiano, who simply turned the job down. Finally, there was Rodriguez.

Despite top-10 finishes in the past two seasons, tension had grown between Rodriguez and West Virgina. The coach thought that developing an elite football program meant access to elite resources. The school thought differently. Michigan called, and Rodriguez was gone.

Years from now, when people look back on what went wrong with Rodriguez’s tenure in Ann Arbor, they’ll probably point to the first time he was introduced as Michigan’s head coach. After some opening remarks and taking a few football-related questions, a reporter broke in with a heavier question. Do you have to be a ‘Michigan Man’ to be the Michigan coach? “Gosh, I hope not,” Rodriguez replied. “They hired me.”

The correct answer is, “No.” Schembechler went to Miami University, Fritz Crisler to the University of Chicago. Fielding Yost, the man who built Michigan football at the turn of the 20th century, played at West Virginia. Somehow, it didn’t matter that Rodriguez followed the path of legends. Their ghosts still haunted him.

It was never a “cultural fit,” they say, but cultural fits aren’t as important when teams are winning football games. They didn’t during Rodriguez’s time in Ann Arbor. The only assistant who didn’t follow him from Morgantown was defensive coordinator Jeff Casteel, and it showed. Rodriguez’s spread requires an adjustment period, and it showed. Michigan’s 3-9 finish in 2008 was its first losing season in 41 years. They would miss a bowl again the following year. The third would be his last. When it was over, the quick answer was that Rodriguez was never a Michigan Man.

These days, the Michigan faithful have no such concern. The man patrolling their sideline might have graduated from Ball State, but he grew up breathing blue. He loved Michigan, coached at Michigan, dreamed of leading Michigan. Brady Hoke is a Michigan Man, and that is why for the first time in a while, everything feels right in Ann Arbor. The top-10 recruiting classes are back, the defense, the toughness — it’s all back. To many, it didn’t matter that Rodriguez grew up in coal country, that his grandfather died of black lung. Whatever that was, it wasn’t Michigan.

The dark days of Michigan football are thrown at Rodriguez’s feet, but they started before he arrived in Ann Arbor. There’s a reason that Schiano said no, and there’s a reason teams like Appalachian State walked into the Big House unafraid. Michigan already wasn’t Michigan. What Rodriguez provided was a jolt to complacency, a galvanizing call to rediscover the Michigan Man. Win or lose tomorrow night, it doesn’t really matter. Michigan is Michigan again because it saw what it was not.