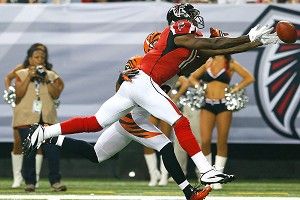 We are so close, degenerates. Just a few short days from now, pro football and — more important — pro football wagering will be back for a glorious 21 weeks. Actually, I’m not sure what I’m so excited about as my Cowboys open up the Wednesday-night game against the Giants. Almost certainly a loss. (I’ll try this reverse-jinx thing one more time — then when it doesn’t work I’ll abandon it for good.)

If you listened to the two–part over/under NFL wins podcast with Simmons and me you may already be familiar with some of these props. Sorry about the redundancy — but it’s a small price to pay considering I’m going to make you upwards of a million dollars. Here we go …

I know. These are the Falcons — a team that can’t get out of their own way once the playoffs roll around. But in this pass-happy league there have been much inferior targets than Roddy White, Julio Jones, Tony Gonzalez, and Jacquizz Rodgers out of the backfield to play in February. Locking up Brent Grimes and free agent Asante Samuel on the defensive end doesn’t hurt either. Also, 25 to 1 is 25 to 1. Don’t be afraid to jump on the dirty-bird special.

If you had to pick one division from each conference to play against this season you would choose the NFC West and the AFC South, right? And from those two divisions you’d want to play the top teams, San Francisco and Houston, at home, wouldn’t you? And if you had a chance to play one of your road games in London against the Rams before a bye you’d do that, too, right? Ladies and gentlemen … your 2012 New England Patriots schedule. After they breeze into the playoffs they’ll be 5/2 odds or worse to win the Super Bowl, so load up on this now.

It’d be nice if they just moved the win total to six so we wouldn’t have to lay so much vig. Either way — this prop is a winner. The fact that after three preseason games the Bucs still didn’t quit on their new head coach is a huge plus. Also: Tampa were big free agent spenders signing Carl Nicks, Vincent Jackson, and Erik Wright for a whopping $140.55 million on the first day of free agency. Not to mention that the Sports Guy’s former flame Josh Freeman lost 25 pounds for the role of comeback payer of the year. Assuming the lack of a few DUIs and botched postgame handshakes, you’re looking at this year’s version of the 2011 Lions. Go with the over, and for kicks throw a few bucks on the Bucs to win the NFC south at 10/1.

Last year this team was a third-and-2 conversion away from making the playoffs. This year they have a weaker schedule (extra games are vs. the Jags and @ the Phins) and a new head coach who seems to have the respect of his players. Carson Palmer aside — this year, Oakland’s very young stars will be the story, rather than their former very old owner. 5/1 to win the AFC West is also good value in this toss-up division.

*(All bets are off if there’s even a whiff of Matt Leinart warming up on the sidelines.)

If Vegas decided to combine the 2012 and 2013 seasons I still think I would like this bet — especially if the Vikes continue to go with Ponder over Webb. Just plain stupid.

I’m rooting for Peyton this year, but four is an incredibly daunting number when dealing with overseas neck surgeries. Speaking of surgical procedures: Eli passed on heading down to Mexico to get that horseshoe removed from his rectum — which makes this prop a lock. Yes — still bitter.

Remember that weird algebraic equation you learned in eighth grade? The one you figured you’d never need to use? I think it went something like Skelton + Kolb + Lindley < Brady. Wayyyyy < than Brady. Last year, in one fewer game played, Welker beat Fitzgerald in receiving yards by a decent margin. Expect the same in 2012.

I double- and triple-checked — this is for the entire season — not just game one. I don’t get this prop at all. Would you rather have your money on the undersize, injury-prone battering ram who will have to do his dancing against the gritty NFC East defenses six times this year or on the guy who, for most games, will be throwing, down two-plus TDs in the fourth quarter, against prevent defenses? Sort of a leading question. Might explain why I failed the bar exam twice.

Warning — you’re gonna lose at least two of these bets. And probably all three if Megatron accumulates his typical 1,000 yards receiving in garbage time. Still — nice odds for a perennial pass-catching machine and two studs from an offense that promises to open things up in a no-huddle system.

Chris Johnson 15/1 to lead the NFL in rushing yards

On second thought, this is terrible. Forget I said anything.

As the only returning Heisman finalist, Ball is poised to have near-record numbers on the ground this season. Besides — you run with a little more vim and vigor after carrying the fear of being chased and beaten by a group of college thugs. I mean — at least that’s what I’ve been told.

As for the fake ones …

The Cowboys have Gimped their top receiver in classic Pulp Fiction style. This cannot end well. Parlay the above with 10/1 odds that after scoring his first TD Dez looks squarely into the camera and delivers the most awkward “Hi, Mom” in televised football history. Sigh.

It would take less than $12 million to get this whole thing settled. I know it’s the NFL that has a beef with the real officials, but it’s hard to believe that the owners would rather chance getting screwed out of a playoff spot as a result of a bad call by an over(under)zealous replacement ref than dip into the revenue generated by their $40-plus game day parking fees to ensure peace of mind.

Over/under 8.5 weeks: MJD laces up his cleats for the Jacksonville Jaguars

The over is the play here if only because of the fact that I reached and spent a second-round fantasy draft pick on him. These things never work out for me.

I’m no psychologist, but is it possible that the Lions’ propensity to misbehave stems from the fact that due to NFL scheduling they’re never able to spend Thanksgiving with their families? Didn’t think so.

Over/under 9.975: How hot is Miami Dolphins temporary starting QB Ryan Tannehill’s wife on a scale of 1 to 10?

I had a great idea for a title but Simmons wouldn’t run it. Let’s just say it was a play off the phrase “Hard Knocks.”

Might as well go out on a low. That’s that. Now go bury your bookie.

About Last Weekend: Hokies Hold On